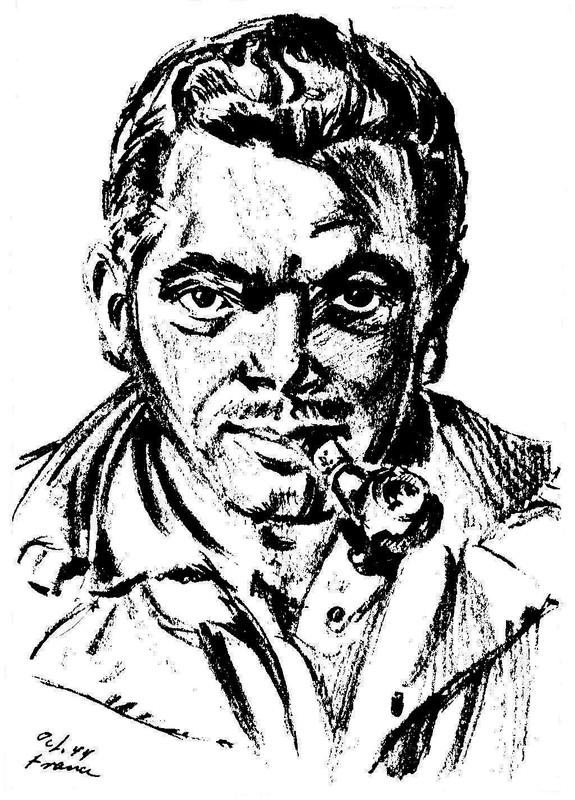 No one spans the history of comic books quite like Jack Kirby. He was there at the dawn of the superhero, now called the Golden Age, to co-create Captain America. He toiled with Stan Lee during the Silver Age of the 1950s and 60s to turn a failing publisher into Marvel Comics, home of the Fantastic Four, the Incredible Hulk, Thor and the X-Men. His departure from Marvel, and work he did subsequently, is regarded as one of the instigating events of the industry’s grittier Bronze Age. His influence persists, even past his death in 1994, through the Modern Age and beyond.

Kirby would have been 100 years old this week. He was born in New York, on August 28, 1917, as Jacob Kurtzberg, the eldest son of two Jewish-Austrian émigrés. His childhood, therefore, was affected by the Great Depression, and his early adulthood by the war. Kirby’s famous drawing of Captain America punching Adolf Hitler is only one part of his Second World War story. Kirby killed Nazis and saw friends die, as an infantryman in Europe. Like so many of his fellow survivors, he then witnessed the atomic bomb, the Cold War and the rise of counter-cultures and computers.

Kirby’s experience of the twentieth century informs his most singular achievement, his Fourth World saga. This is the grand story, spanning several comic-book titles, that he both drew and wrote for DC Comics after leaving Marvel in 1970. Kirby begins with two familiar DC characters, Superman and Jimmy Olsen, but soon pulls them into an unfamiliar mythology born of his own experiences and imagination. Here, a cosmic war is being fought between the gods of New Genesis and the demonic Darkseid of Apokolips. Humanity is a potential casualty.

The word “holocaust” appears in the Fourth World saga with chilling regularity. So too do death camps, torture devices and atomic blasts. Forever People #3, one of Kirby’s finest single issues, even begins with a quote attributed to Hitler: “That is the great thing about our movement – that these members are uniform not only in ideas, but, even, the facial expression is almost the same!” Underneath stands a crowd of people, all of whom wear the same blank expression, all victims of Darkseid’s Anti-Life propaganda.

But there is light as well as dark in Kirby’s story – particularly when it comes to young people. The heroes of the Fourth World books are typically bohemians from across space-time, with names such as “Beautiful Dreamer” or “Big Bear”. They ride motorcycles down psychedelic highways, talking of love, and are dismissed as hippies by many of the people they encounter. Yet Kirby doesn’t dismiss them. He identifies not just with those who, like him, have fought against the Nazis, but also with those who have grown up, free, afterwards.

Kirby was constantly in search of freedom. By most accounts, he rarely found it. He began to feel imprisoned during his time at Marvel in the 1960s, and his home studio, in which he would work for fourteen hours a day, completing pages at a rate that few other artists could match, was nicknamed “The Dungeon”. 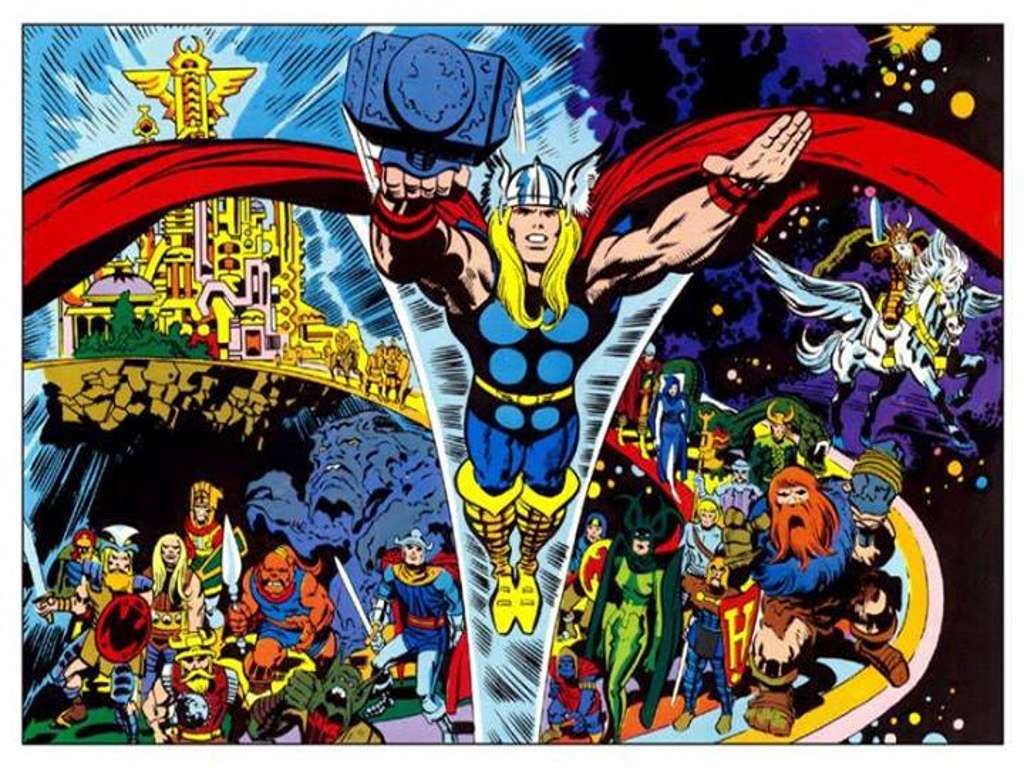 The story of Kirby’s relationship with Stan Lee, and how it soured, is recounted in Sean Howe’s Marvel Comics: The untold story, but it comes down to a simple imbalance. Together, they created superheroes such as the Fantastic Four and Thor, each adding to the collaboration in different and essential ways – yet Lee ended up with the better contracts and more of the fame.

Yet Jonathan Lethem, a vocal fan of Kirby’s, argues in his essay collection The Disappointment Artist that Kirby benefited from working with Lee. As he puts it, “Kirby always wanted to drag the [Fantastic] Four into the Negative Zone – deeper into psychedelic science fiction and existential alienation – while Lee, in his scripting, resolutely pulled them back into the morass of human lives, hormonal alienation, teenage dating problems and pregnancy and unfulfilled longings to be human and normal and loved”. In other words, Lee brought Kirby back down to Earth.

It’s certainly true that undiluted Kirby, the brand that readers got after his move to DC, is almost overwhelming. Back in the 1940s, he had pioneered the most spacious layout in comics, the double-page spread. But now he struggled to stay within its confines. His drawings in the Fourth World books are a riot of thickly-proportioned characters, multi-limbed monsters and impossible machinery. His writing is loud and insistent. It is a style made for deities such as Darkseid – “I am the revelation! The tiger-force at the core of all things!” – not for everyday people. 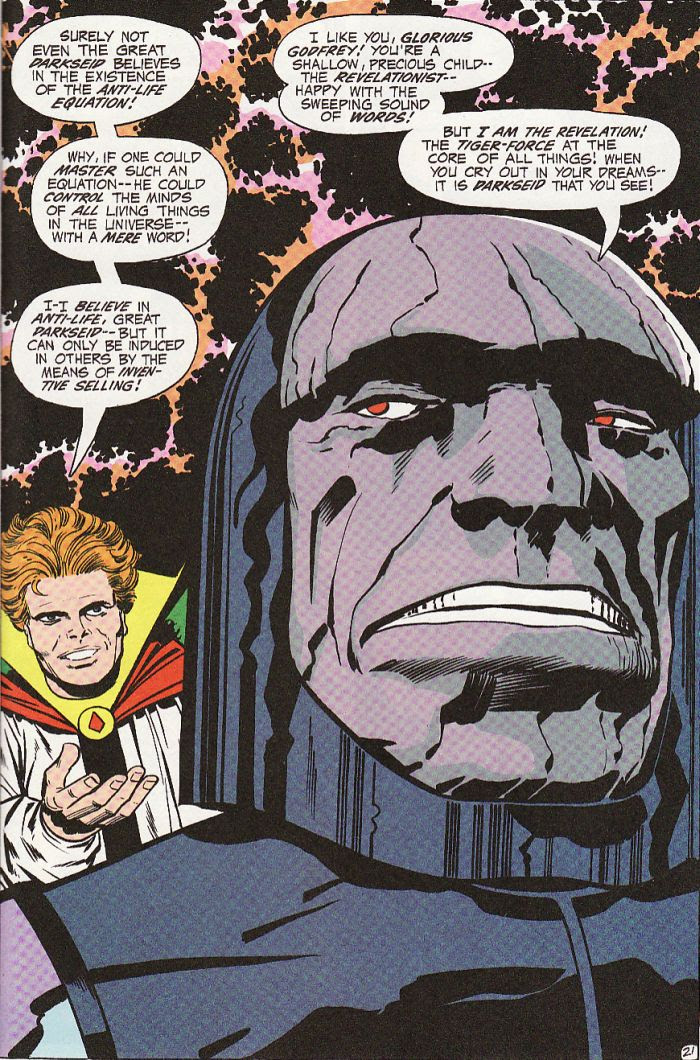 Various novelists, including Lethem, Michael Chabon and Michel Faber, have spoken of their admiration for Kirby. Few, if any, have ever written anything that might be described as “Kirby-esque”. In his most recent science fiction novel, The Book of Strange New Things, Faber seems to acknowledge this almost directly. He names a character after Kirby, but that character is off on his own – a space missionary whose story is left purposefully mysterious, and who may have lost himself in an alien society. In this missionary’s absence, the author describes a planetary scene that Kirby would never have drawn: “Nothing fancy or monumental. Square blocks, like British tower blocks, cheap utilitarian housing. Not exactly the diamantine spires of a fantastical city”.

No one can match Kirby, and, in a sense, no one should try. According to his biographer and friend, Mark Evanier, Kirby didn’t have much sympathy for artists who hoped to continue comic-book titles in his tradition. “The Kirby tradition”, he would say, “is to create a new comic.” That is how he ought to be remembered, 100 hundred years after his birth: as an artist who always wanted to go beyond.

https://www.the-tls.co.uk/articles/public/jack-kirby-centenary/
Posted by Frank Black at 11:32