Moonscapes at the Watts Gallery, Guildford 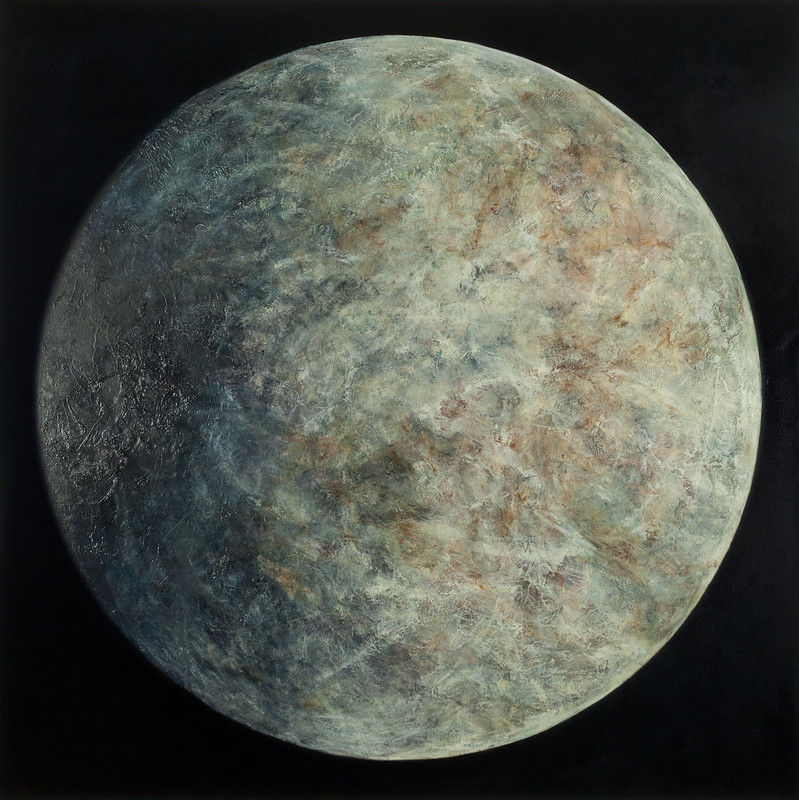 
"It's impossible not to wonder at the Moon and about the Moon, it's full of myth and magic. My inspiration to paint the moon came from a number of influences, as a child I listened endlessly to David Bowie's Space Oddity; I was rocketed up in that tin can to a wondrous world way beyond my world… I grew up on Salisbury Plain where we would ride across the cratered "Impact Area", a pock marked landscape that seemed to me just like the surface of the moon. As there was no light pollution on the Plain the night sky was often a visual feast of stars. My late father who navigated on the first Round The World sailing race, gave me huge inspiration when describing the night sky on his voyage. His sextant was always an object of fascination to me. On his death in 2000 I was drawn to contemplate the cosmos & found myself lured to the Moon."

"I paint in oil, & sometimes pigment. I begin my process by painting on the floor where I apply a resin called Alkaflow to create the texture of the lunar surface, once dried, the canvas goes back onto the wall where I apply more paint. This process is repeated so I build up layers of paint." 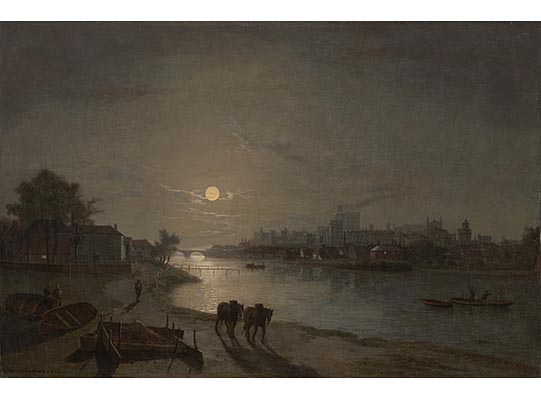 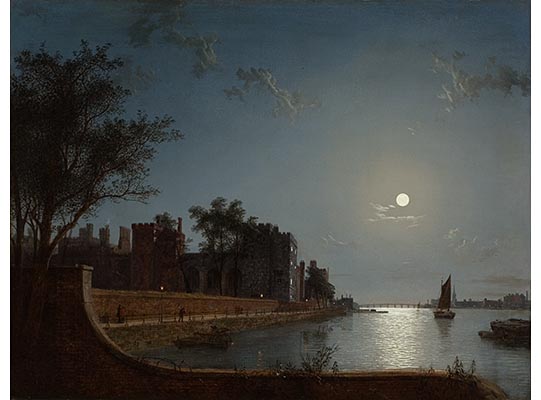 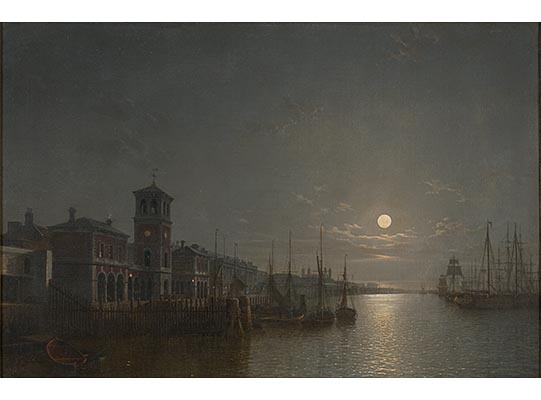 Pool of London, Billingsgate to the Tower, Moonlight 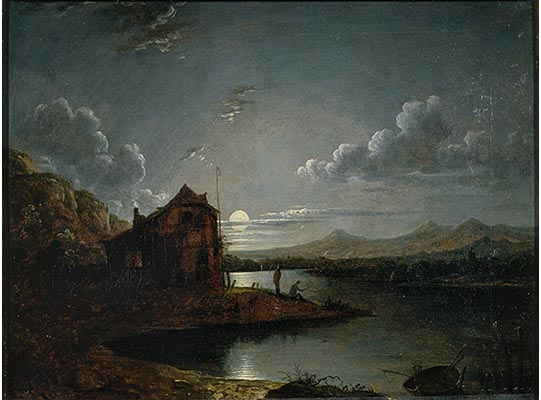 A River Scene with Cottage by Sebastian William Thomas Pether

On show at the Watts Gallery are four paintings by Abraham, Sebastian and Henry Pether, widely known as the ‘Moonlight Pethers’. The works depict either recognisable landmarks in Britain, or imaginary views against a backdrop of a silvery moon and a waterside setting. Abraham Pether’s Windsor Castle, made in 1809, is a typical example of the artist’s nocturnal scenes that reinforces his reputation as ‘Moonlight Pether’. Henry Pether’s Lambeth Palace by Moonlight and Pool of London, Billingsgate to the Tower, Moonlight demonstrate the artist’s accuracy and eye for detail in representing architectural subjects and skill for moonscapes. Sebastian Pether’s A River Scene with Cottage shows an imaginary setting with a lake and a mountainous landscape that reflects the moonlight.

For Abraham and his sons, Henry and Sebastian Pether, moonlit and dramatically illuminated scenes became signature works. During the early 19th century this family of artists established a reputation for producing a series of nocturnal, atmospheric paintings, which were both part of an artistic and a scientific enterprise. In addition to his career as an artist, Abraham Pether had an extensive knowledge of scientific subjects and gave lectures on electricity. ‘His philosophical and mathematical researches deserve every praise: he was an admirable mechanic, and had constructed telescopes, microscopes, and almost every instrument relative to science, upon the grandest and most improved principle’, an obituary reported. Both Abraham’s sons, Henry and Sebastian followed their father’s example and continued the tradition of moonscapes. 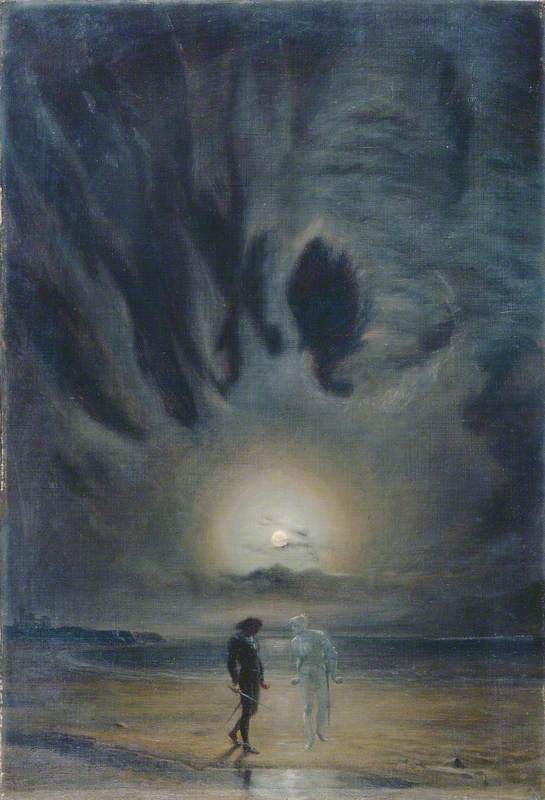 Hamlet and the Ghost by Frederic James Shields

Moonbeams Dipping into the Sea by Evelyn de Morgan 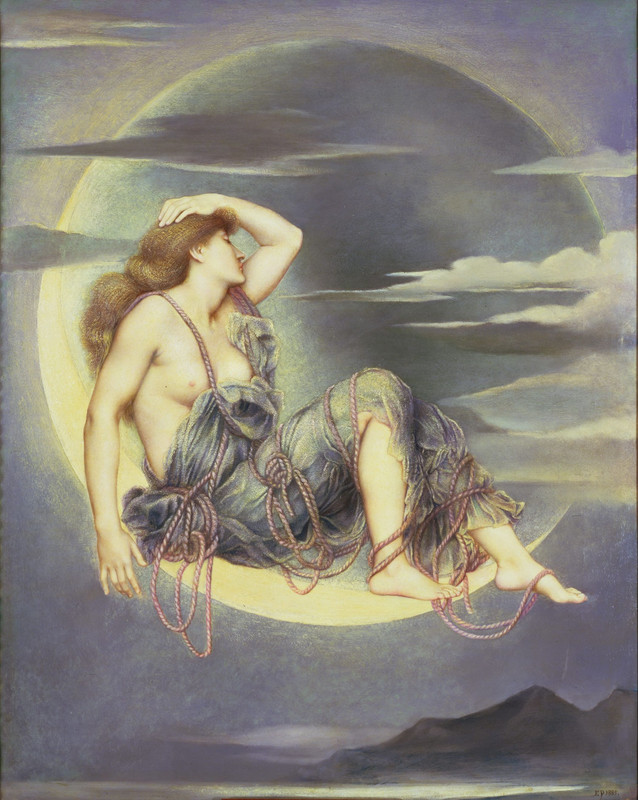 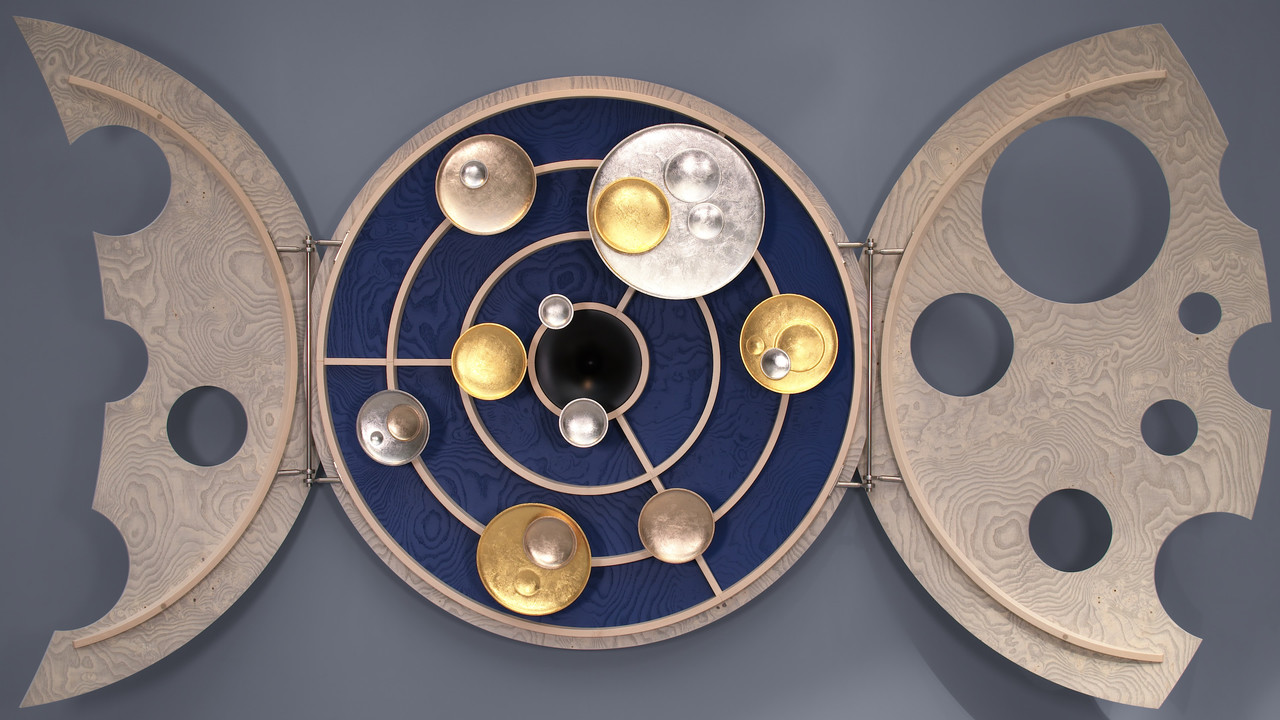 Exploring the blurred boundary between Art and Science, the Moon Cabinet draws inspiration from orreries, the moon and beyond. The swirls in the burr ash grain look like the surface of the moon and are interspersed with craters and sub-craters, gilded in yellow gold, palladium and 'moon gold' leaf. Opening the doors reveals a magnificent blue night sky. The craters are now transformed into planets within a solar system that seem to float in space. At the centre is a black hole.

It is a key cabinet. Behind the craters are stainless steel hooks, fashioned like little satellites spinning off into space. 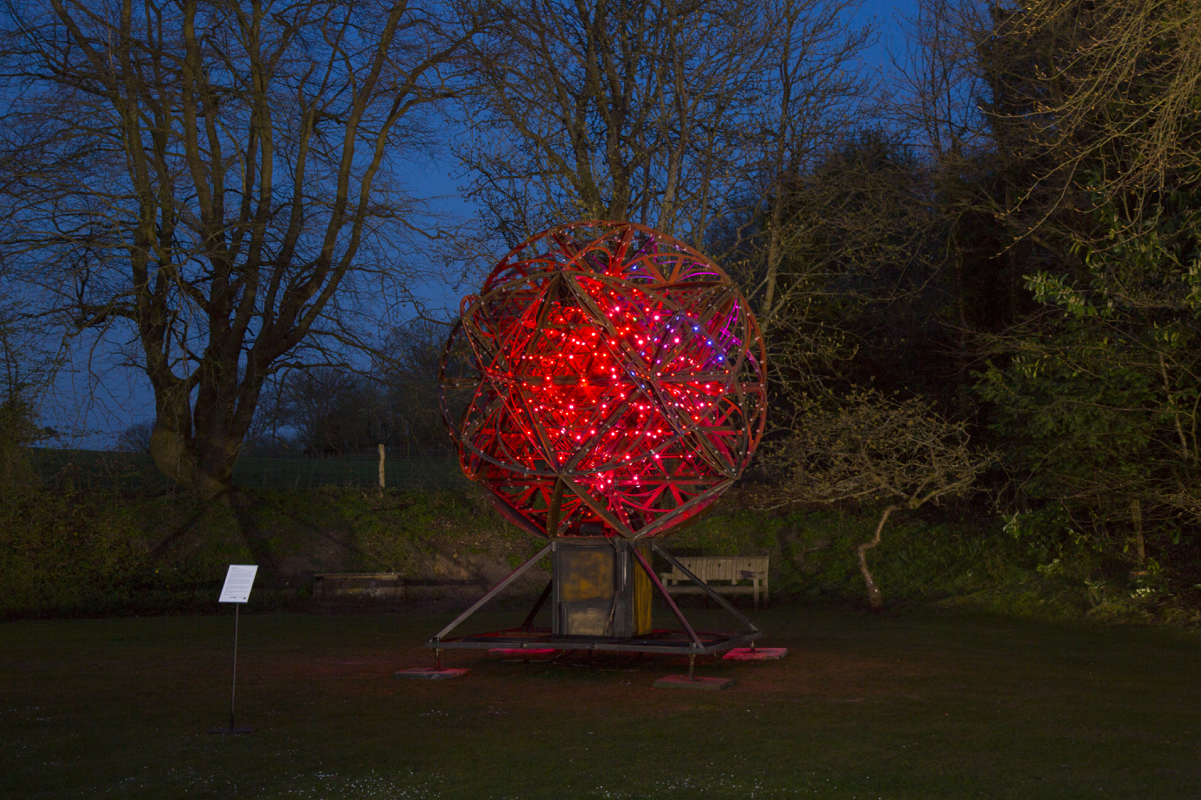 Cosmoscope by Simeon Nelson with Rob Godman and Nick Rothwell

Begun in 2016, Cosmoscope was a major interdisciplinary research project led by Simeon Nelson, Professor of Sculpture at the University of Hertfordshire. It brought together leading biomedical, astro and experimental physicists at University College London, Oxford University and Durham University, and psychologist Monia Brizzi.

Inspired by historical astronomical instruments and models of the cosmos, Cosmoscope presents a narrative of the origins, evolution and nature of life. The installation explores quantum, human and cosmic scales from the biomedical study of blood flowing through the human heart, to the order and disorder of atoms and molecules, to the dynamics of cosmic formation and meaning.

Accompanying Moonscapes, an exhibition that explores the interactions between art and astronomy in the late nineteenth century, Cosmoscope illustrates how the latest ideas and research in art and science continue to draw upon and inspire each other today. 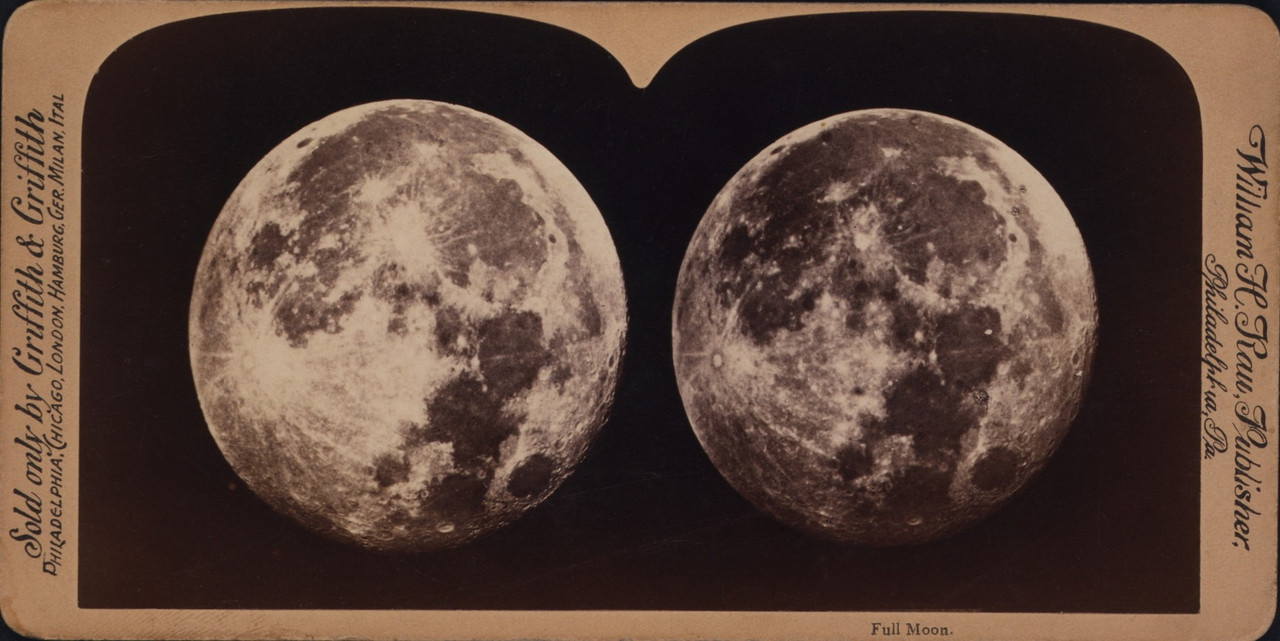 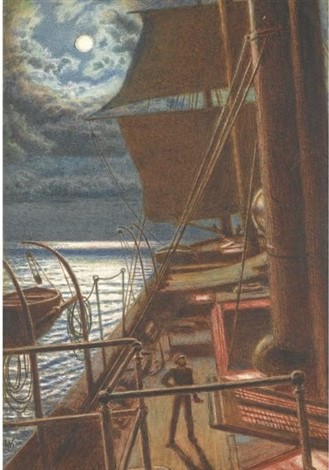 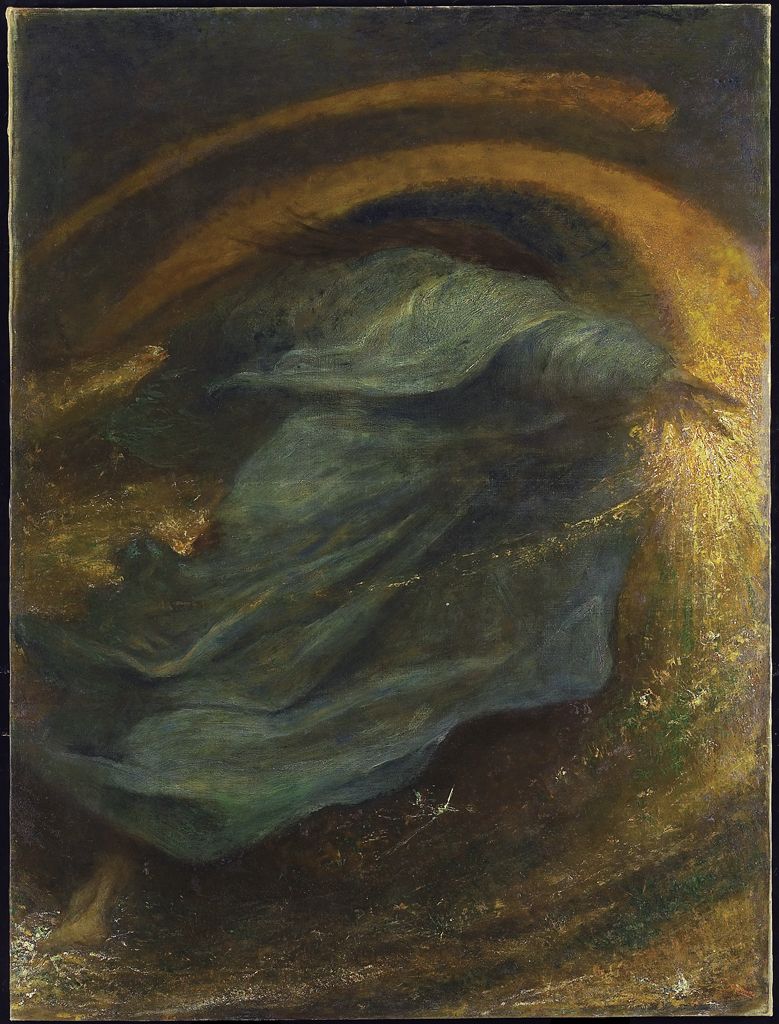 The Sower of the Systems by G. F. Watts 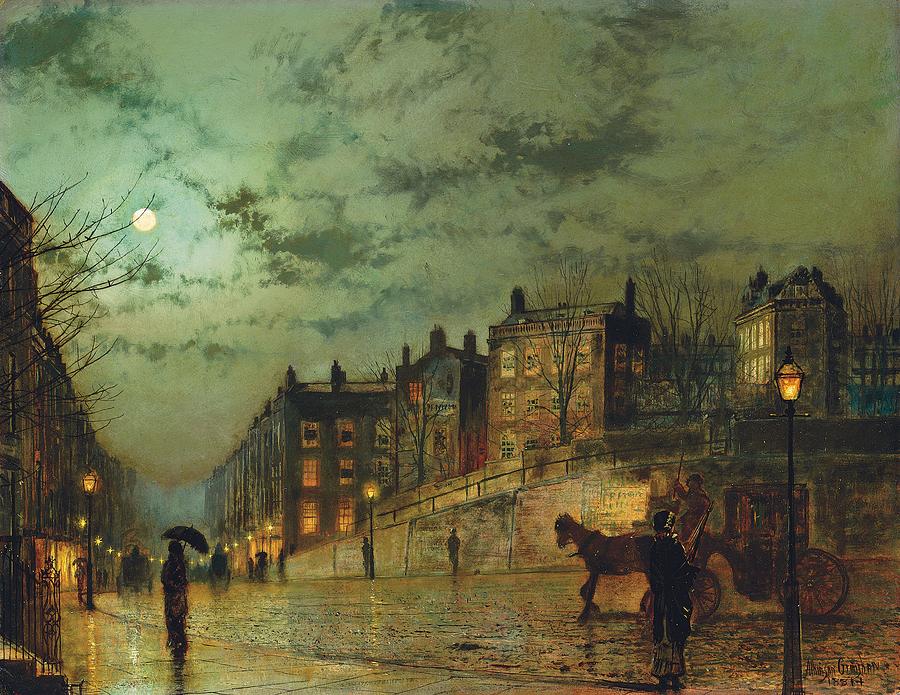 Join us in the year of the 50th anniversary of the first moon landing for Moonscapes, the first exhibition to explore nineteenth-century visions of the moon.

Presenting a selection of works by significant artists including William Holman Hunt, John Atkinson Grimshaw, Evelyn De Morgan and G F Watts, Moonscapes will consider the Victorian fascination with the earth's closest cosmic neighbour, bringing into focus the many ways in which nineteenth-century artists have drawn inspiration from the moon. The exhibition will be accompanied by a programme of contemporary art interventions that will accent the key themes of the exhibition through light, sound and space including: Cosmoscope by Simeon Nelson with Rob Godman and Nick Rothwell; The Moon Cabinet by Rupert Senior; Artemis by Charlie Barton and Year 2 Arsenic 1 by Garry Fabian Miller and work by Mary Branson as Artist in Residence. 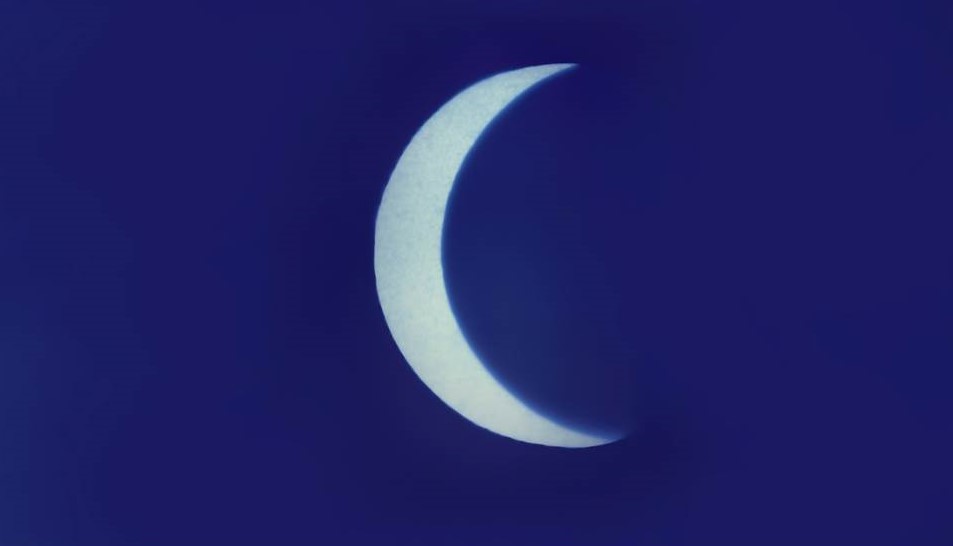 The appearance of the moon, and its changing phases, has been the subject of debate and visual interpretation since time immemorial. The development of astronomical telescopes in the seventeenth century sparked intense lunar interest in Britain, leading scientific pioneers to found the Royal Astronomical Society in 1820.

Artists were similarly beguiled by the complexities of the cosmos. Some, such as G F Watts, became closely associated with astronomers - in his case Sir John Herschel, President of the Royal Astronomical Society.

Artists were captivated by the painterly challenge of depicting nocturnal landscapes, and saw the moon as a symbol of nature's enormity. For Abraham Pether and his two painter sons, depicting the moon became the family business. Known as the 'Moonlight Pethers', their glowing landscapes balance detailed technique with intricate meteorological observation.

From the 1880s, oil paintings featuring the personification of the moon were produced by symbolist painters including Evelyn de Morgan and G F Watts. In De Morgan's Luna 1885 the moon is embodied by the figure of a young woman seated on a crescent, with the artist representing the Roman Goddess. Watts's dynamic vision for the creation of the cosmos is illustrated by the Sower of the Systems 1902, in which a robed, faceless figure sweeps across space, radiating arcs of gold to form galaxies.

Moonscapes will also examine the scientific tools that astronomers have used to expand lunar knowledge. From an intricate orrery (a mechanical model of the Solar System) to a globe mapping the moon's cratered surface, these complex and beautiful objects show how enterprising scientists attempted to decipher the mystery of the lunar orbits. Early stereoscopic photography will close the 384,400 km distance and bring the moon into focus in astonishing detail.

The exhibition features Cosmoscope, a monumental sound and light sculpture created by artist Simeon Nelson with Rob Godman and Nick Rothwell at the University of Hertfordshire's School of Creative Arts, who have kindly supported this artistic collaboration.

https://www.wattsgallery.org.uk/whats-on/moonscapes/
Posted by Frank Black at 11:06