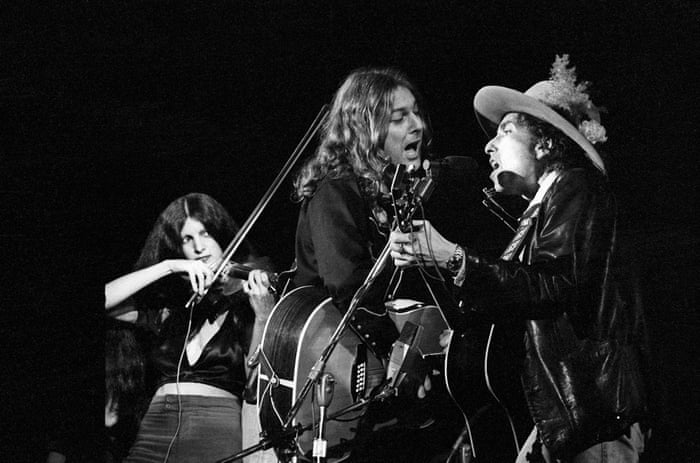 ‘Life isn’t about finding yourself or finding anything,” says Bob Dylan. “It’s about creating yourself.” At 78, the musician moves into a new phase of self-creation with this intriguing, fascinating, perplexing, sometimes exasperating film directed by Martin Scorsese – which is to say Scorsese has supervised a witty curatorial edit of archive film material, and in effect collaborated with Dylan in another artistic act of self-reshaping.

The film is about Dylan’s Rolling Thunder Revue show of US and Canada in 1975 – a 57-date tour in which the troubadour appeared in whiteface makeup, with an extraordinary changing list of support acts that included Joan Baez, Joni Mitchell, Roger McQuinn, Ronee Blakley, “Ramblin’” Jack Elliott, Bob Neuwirth and the violinist Scarlet Rivera. And these weren’t massive arenas he was playing, they were little halls and venues, with publicity sometimes limited to flyers handed out on the day to astonished denizens of the little towns in which the Ken Kesey-style tour bus would cheerfully roll up with the grinning Dylan at the wheel. Try to imagine it happening now.

What was it like for Dylan to be spearheading this event, a kind of musical rumour meandering through an America that was just recovering from the mortification of Watergate and gearing itself up as best it could for its bicentennial celebrations? “It was so long ago I wasn’t even born,” says the wry Dylan now with a shrug, and his interviewee appearances are all very funny, that voice as dry as prairie grass.

The film does not quite wish to tell you what it was like in any obvious way. There is something weird and mischievous going on. The concert footage and backstage scenes appear to be drawn from the same trove of archive material that formed the basis of Bob Dylan’s lengthy and ill-fated 1978 film about the tour, Renaldo and Clara, which he co-wrote with the late Sam Shepard – who is interviewed here. Like that film, the Rolling Thunder Revue does have some personae who may not be, strictly speaking, factual. The footage is attributed to a certain dyspeptic film-maker who is actually the performance artist and comedian Martin Von Haselberg, husband of Bette Midler. A certain politician is interviewed and you may think: “Wait, that guy looks like the actor Michael Murphy.” It is the actor Michael Murphy. Could it be that this is all a modern commedia dell’arte in which, with Scorsese’s discreet assistance, Dylan is retreating behind masks, masks that might allow him to tell a higher truth?

Possibly. Scorsese drops further hints with clips from films concerned in various ways with theatrical performance: Georges Méliès’s The Vanishing Lady (1893), Marcel Carné’s Children of Paradise (1945) and Tony Gatlif’s Latcho Drom (1993). Sometimes the creative semi-remembering is a bit opaque, and there were times when I could have done with some more straightforward documentary realism. But it’s churlish to complain when this is all so gripping, both as a time capsule and as a showcase for Dylan’s unique presence and glorious performances from Baez, Mitchell and also from Patti Smith who was not actually a member of the Rolling Thunder tour but is shown performing before it got started.

Allen Ginsberg is another intensely 70s figure shown here on tour, at once egotistical and yet deferring utterly to Dylan’s majestic importance. There is a great interview with Sharon Stone, who appears to have gone briefly on tour with Rolling Thunder as a young woman and is (delicately) interviewed about her experiences – including bursting into tears when she discovered that Bob Dylan’s Just Like a Woman was not, despite what he’d caddishly told Stone, based on her. Could it be that she was not the only young female fellow traveller on whom Bob used that line?

The emotional centre of the film is Dylan’s protest song Hurricane, about the boxer Rubin “Hurricane” Carter who was falsely imprisoned for murder. That song, and the Rolling Thunder tour, were an important part of the momentum that overturned Carter’s conviction – though he would not be finally released for another 10 years.

This is an immersive experience, like being plunged back into the 70s. There is passion there. No matter how chaotic or bleary things get, no one is in any doubt that the music counts.

https://www.theguardian.com/film/2019/jun/11/rolling-thunder-revue-a-bob-dylan-story-review-martin-scorsese
Posted by Frank Black at 07:14