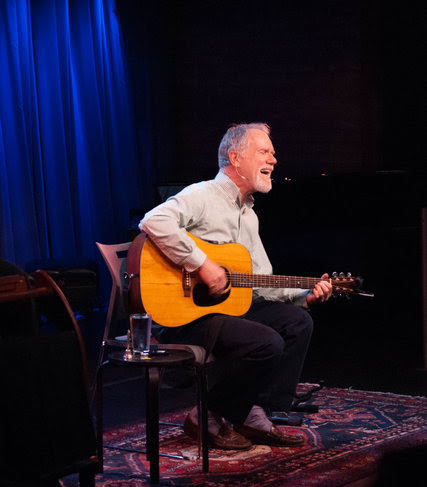 The first song Loudon Wainwright III ever wrote for his son, Rufus, is more than 40 years old by now, an address to his child in utero.

Its giddy playfulness is right there in the title, “Dilated to Meet You,” and when the elder Mr. Wainwright performed it on a ukulele Wednesday night at SubCulture in his new solo show, “Surviving Twin,” the passage of time made its last lines bittersweet: “We really think you’ll like it here. We hope that you like us.”

Every parent’s longing, right? Kind of breaks your heart. But “Surviving Twin” is a sentimentality-free zone, and as soon as the song was done, Mr. Wainwright jumped into an anecdote. “When we told my grandmother that her first great-grandson would be called not Loudon IV but rather Rufus, she said, ‘Rufus? Rufus? That’s a dog’s name!’ ” He paused, just long enough. “She was right, of course.”

It’s a funny moment, but there’s a sting to it, the aggression mixed right in. So it goes in “Surviving Twin,” a bristling, acerbic, ultimately affecting family album of a show, with father-son resentments, hostilities and resemblances laid out for all to see, alongside the love and self-loathing.

Directed by Daniel Stern, it’s billed as “a posthumous collaboration” between Mr. Wainwright, the singer-songwriter, and his father, Loudon Wainwright Jr., the Life magazine columnist, who died in 1988. There’s some masterful writing in those columns, interwoven here with Loudon III’s songs and a batch of Loudon Jr.’s letters from the 1940s, before Loudon III was born.

The trouble with posthumous collaboration, if you happen to be the dead half of the partnership, is that it’s up to the living half to give you your due. At 68, Mr. Wainwright seems to be trying to gain some understanding of his father and himself, but he doesn’t appear to have much sympathy for either of them.

Death hasn’t halted this son’s competition with his father, which may have something to do with the angry yet absent way he performed the early parts of the show Wednesday night. Then again, he may simply have been in a mood. He warmed into the performance, though not before he’d rendered one long, lovely piece of his father’s prose nearly lifeless.

But “Surviving Twin” becomes quite moving, precisely because the relationships it depicts are so far from the anodyne ideal. “If families didn’t break apart, I suppose there’d be no need for art,” Mr. Wainwright sings, and in the moment, that feels absolutely true. 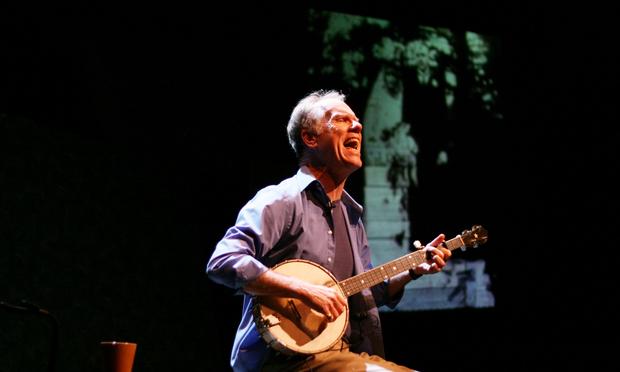 Loudo talks to NPR's John Schaefer about Surviving Twin and his last album, Haven't Got the Blues (Yet).


"Oddly enough," says Wainwright, "I feel closer to my father now — and he's been dead for over 25 years — than I ever have." 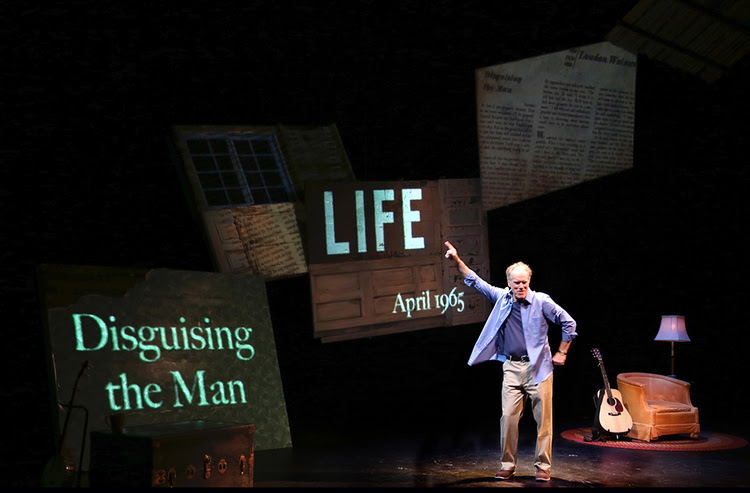 Loudon Wainwright III has always told stories in his songs, usually of the sardonically humorous and deeply personal variety. He mines both qualities to excellent effect in his one-man show, described as a "posthumous collaboration" with his father, famed Life Magazine columnist Loudon Wainwright Jr., whose "The View From Here" essays ran in the publication from 1963 until his death in 1988. Alternately poignant and bittersweet, Surviving Twin is both a moving homage and a pointed musical meditation on the complexities of familial relationships.

Directed by actor Daniel Stern, the piece is simple in its theatricality. Appearing on a nearly bare stage, the singer performs monologues composed of excerpts from his father's columns, interspersed with thematically related songs from throughout his career, in which he accompanies himself on guitar, banjo ukulele and piano. It also features video projections of decades of family photographs and home movies.

It's clear from the spoken-word segments that Wainwright has inherited his father's literary talent, one that has also been passed down to his own children, singer-songwriters Rufus andMartha Wainwright and Lucy Wainwright Roche.

He begins with the title song, from his 2001 album Last Man on Earth, in which he sings about his conflicted, near Oedipal relationship with his father: "But how can you murder someone/In a way that they don't die?/I didn't want to kill him/That would be suicide." That's followed by an excerpt from a column entitled "Life With — and Without Father," in which Wainwright Jr. comments about his relationship with his own father, and then the song "Half Fist," in which the singer reflects on his grandfather, "the first Loudon," who died four years before he was born.

"They say he was an SOB, who liked to smoke and drink/In the photos he looks handsome … trapped is what I think."

Wainwright III, who has no shortage of acting credits, does very well by the monologues, which are not merely recited but performed. One highlight is "Disguising the Man," in which his father describes buying his first tailored, Saville Row suit. The singer also plays the role of the tailor, gently guiding his father through the laborious fitting process, and then dons a sharp three-piece suit before casually revealing that "this is the actual suit that Mr. Perry made for my father … it's 50 years old."

Later, he delivers "Another Sort of Love Story," dating from 1971, in which his father talks about having to have his beloved old dog — half Irish setter and half golden retriever — put to sleep. That's followed by the new song "Man & Dog," a comedic reflection on owning a dog in the city.

Another piece, "Father's Day," about the pleasures and pains of fatherhood, is followed by the hilariously titled number "Dilated to Meet You," addressed by the singer to his then unborn son:

The piece is not without its flawed aspects: the correlations between the spoken and sung segments are not always resonant; the pacing sometimes drags despite its brief, 80-minute running time; and there is an inevitable air of self-indulgence. But at its best, Surviving Twin displays a moving love and respect, tinged with sharp-edged observations, from one generation for another. And with Father's Day just around the corner, it provides the perfect opportunity for some father/son bonding.

http://www.hollywoodreporter.com/review/surviving-twin-theater-review-801907
Posted by Frank Black at 10:43