The man in the picture is on fire with love. Flames surge and ripple around him. Dressed in nothing but a fine lawn undershirt, open almost to the waist, hair slicked back from his beautiful face in the heat, he is all ready for the beloved. A woman whose identity is revealed – if only we could make it out – in the miniature dangling from a chain round his neck, a portrait even smaller than this one. She gave herself to him, in private, and now he offers himself in return: a lover burning with passion.

Nicholas Hilliard’s Unknown Young Man Against a Background of Flames is a stupendous painting – overwhelmingly potent and erotic. Yet it is not quite three inches tall. An object made to be held in the hand, to be touched, examined, even kissed, it nonetheless has the full force of a life-size portrait, the lover so fully present as to appear immediately recognisable (a young Ciarán Hinds), his message conveyed with dramatic urgency. And Hilliard goes further, exploiting the diminutive scale as no conventional portraitist could. The flames are scattered with powdered gold so that when the picture is turned this way and that, the fire of love leaps into life. 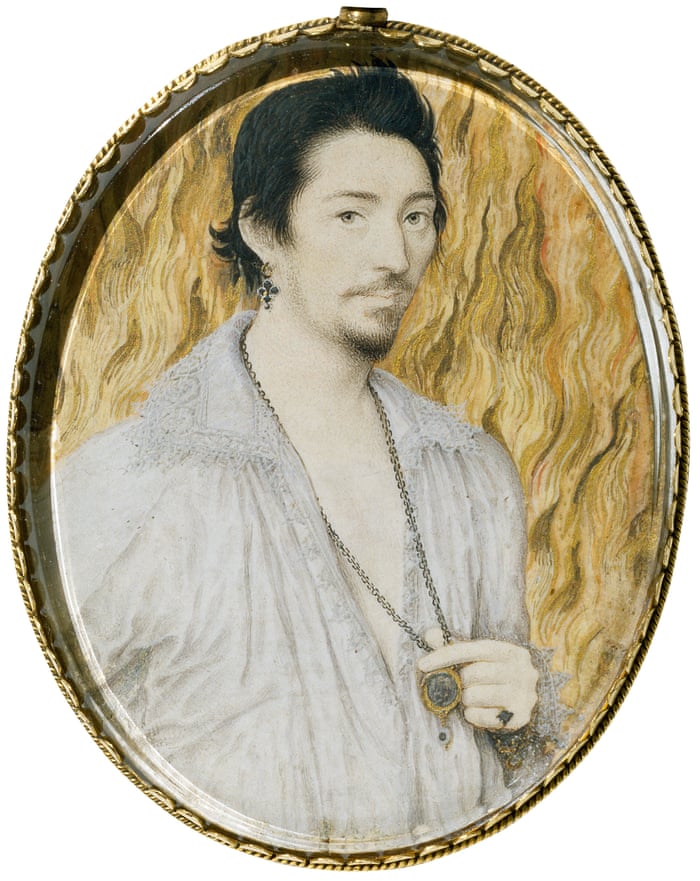 Described by him as “a thing apart from all other painting or drawing”, the portrait miniatures of Hilliard (1547-1619) and his sometime pupil Isaac Oliver (1565-1617) are not just a unique contribution to the evolution of British painting, but among the great works of European art. Hilliard was the first English artist to be “much admired”, a contemporary wrote, “amongst strangers”. Prized by Medicis, Hapsburgs and Bourbons, he was compared to Raphael. John Donne, homing in on the genius of his miniatures in comparison to enormous history paintings, wrote that “a hand, or eye/ By Hilliard drawn, is worth an history,/ By a worse painter made”.

The hand in a Hilliard is fractional, the eye practically subatomic. Naturally, this is what strikes first in this magnificent show, as you struggle to see how the miracle is achieved through the magnifying glass conveniently supplied. But enlargement turns out to explain nothing of the magic: the air of wayward distractedness in Sir Walter Raleigh’s brilliant blue eyes; the hopeful optimism in the teenage face of Henry, Prince of Wales, with his incipient moustache; the alarming steeliness of Robert Dudley, Earl of Leicester, favourite of Elizabeth I. 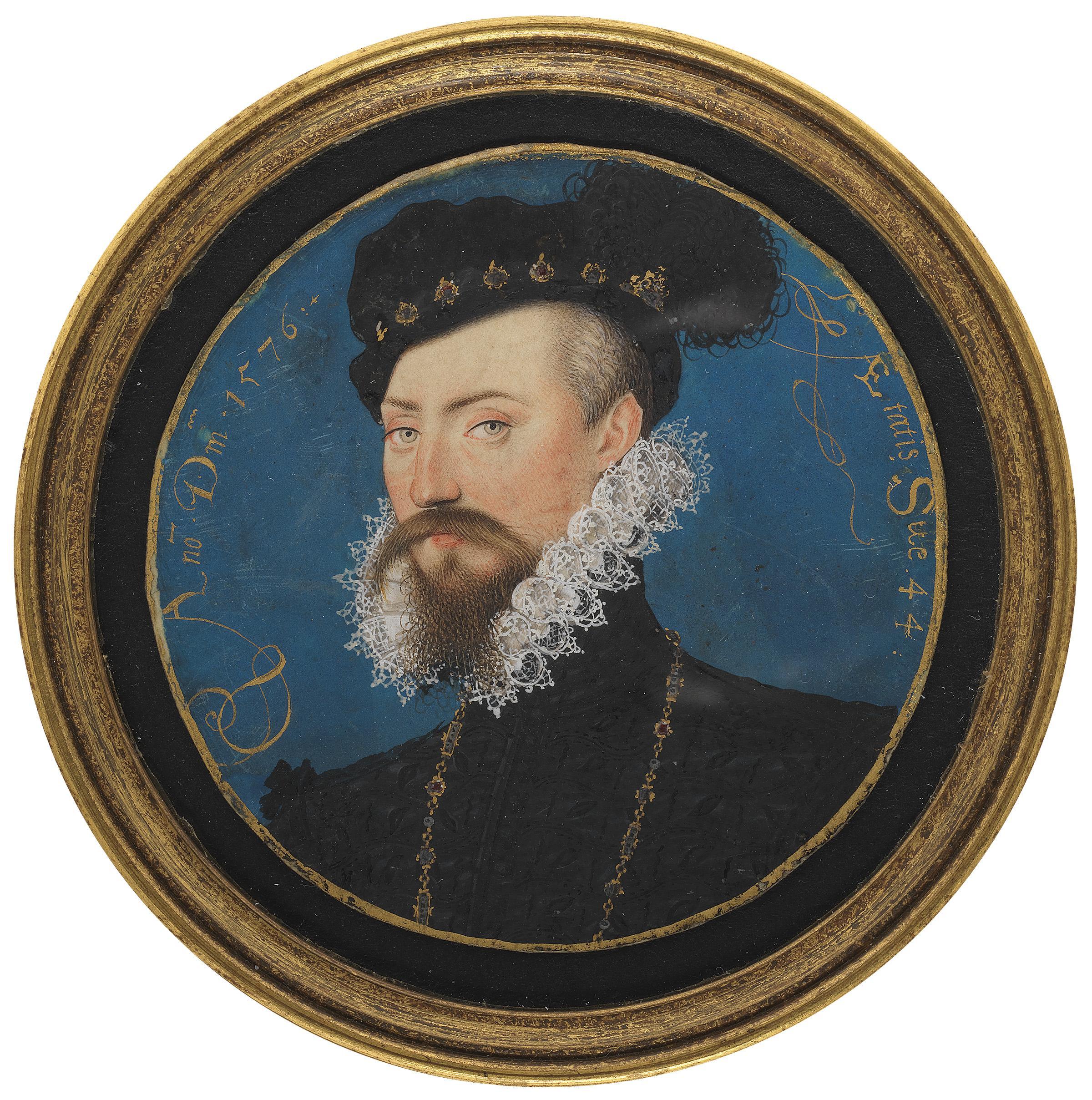 The queen’s appearance itself, so often painted as little more than a jewelled diagram, bodies forth with far greater plausibility in these miniatures. Hilliard, 30 years a court painter, particularly captures the curious contours of her egg-shaped head, the cavernous eye sockets and protuberant lower lip. Isaac Oliver went further, showing a deep crease in the forehead, thinning hair and a greater protuberance as Gloriana lost her teeth. 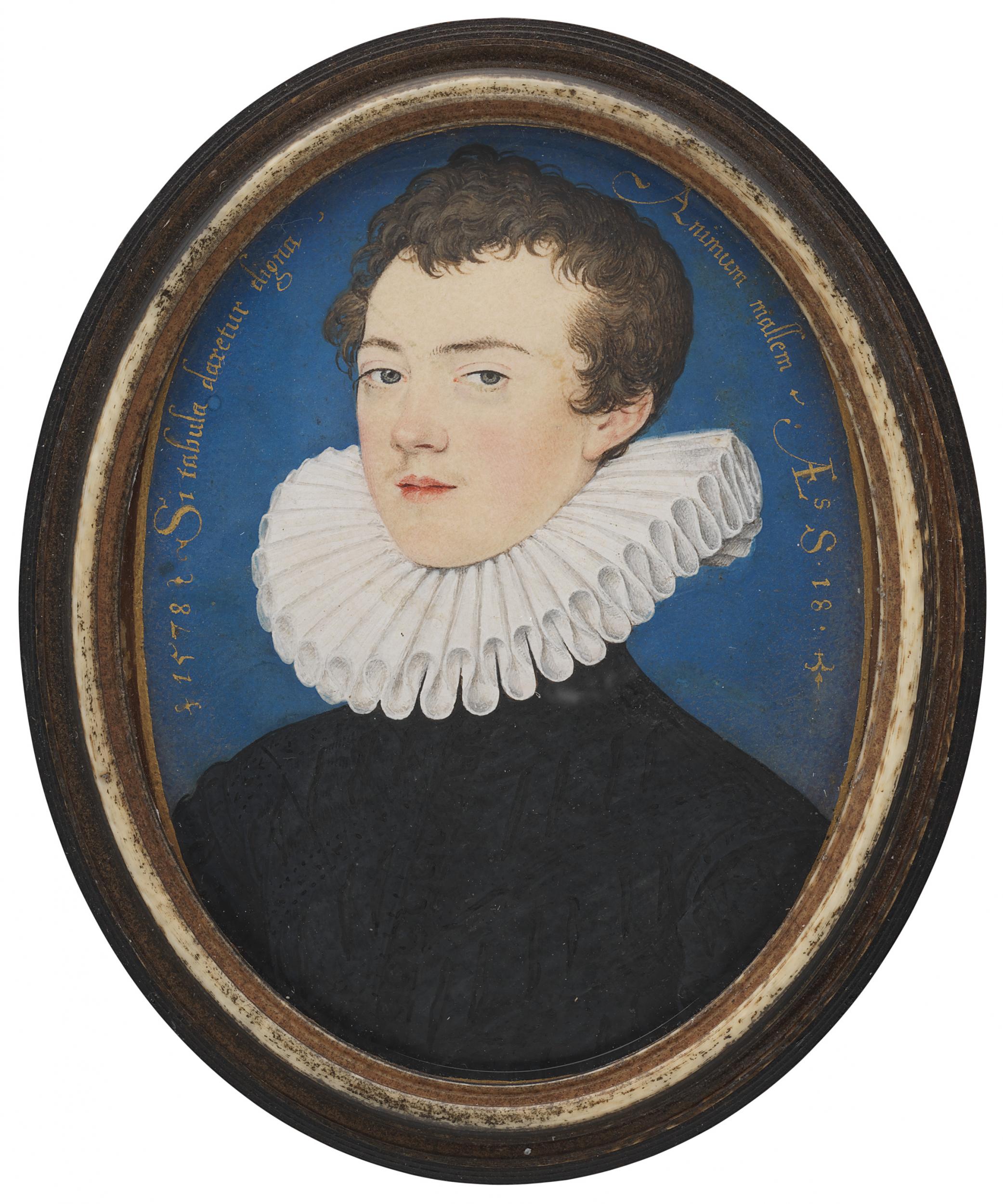 Sharp sight, close scrutiny; there is some irreducible connection between scale and observation in this art. Hilliard and Oliver are so much more acute than their contemporaries. It is not just that their portraits haven’t the usual stiffness of Elizabethan art, nor its superficial concern with power, but that they seem so probing in their contemplation.

Sir Francis Drake, veteran explorer, has weather-reddened cheeks and undeceived eyes. Francis Bacon, future philosopher and statesman, is already exhausted by his own midnight-oil precocity as a shrewd 17-year-old thinker. And if you did not know that Sir Philip Sidney’s sister Mary was herself a considerable writer, you might deduce it from her half-smiling face, quick with intelligent curiosity. 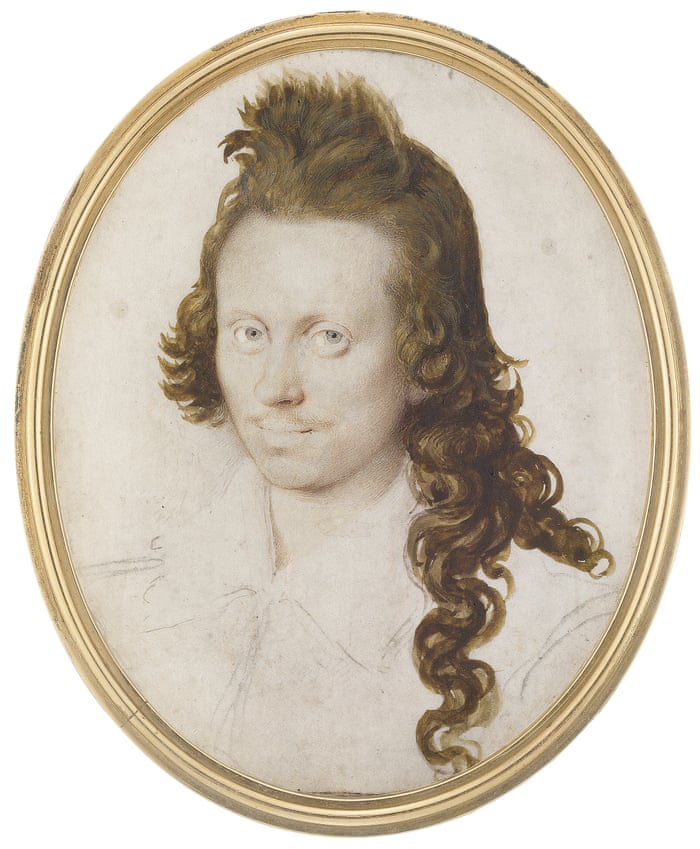 The Earl of Southampton, Shakespeare’s patron and (some say) lover, appears in a staggering image by Isaac Oliver, far more revealing than any of the many other likenesses painted during his lifetime. The notorious love lock descends almost to his navel, the high quiff appears to be held aloft with something like sugared water, and his amused round eyes catch yours with an expression of almost unnerving confidence. 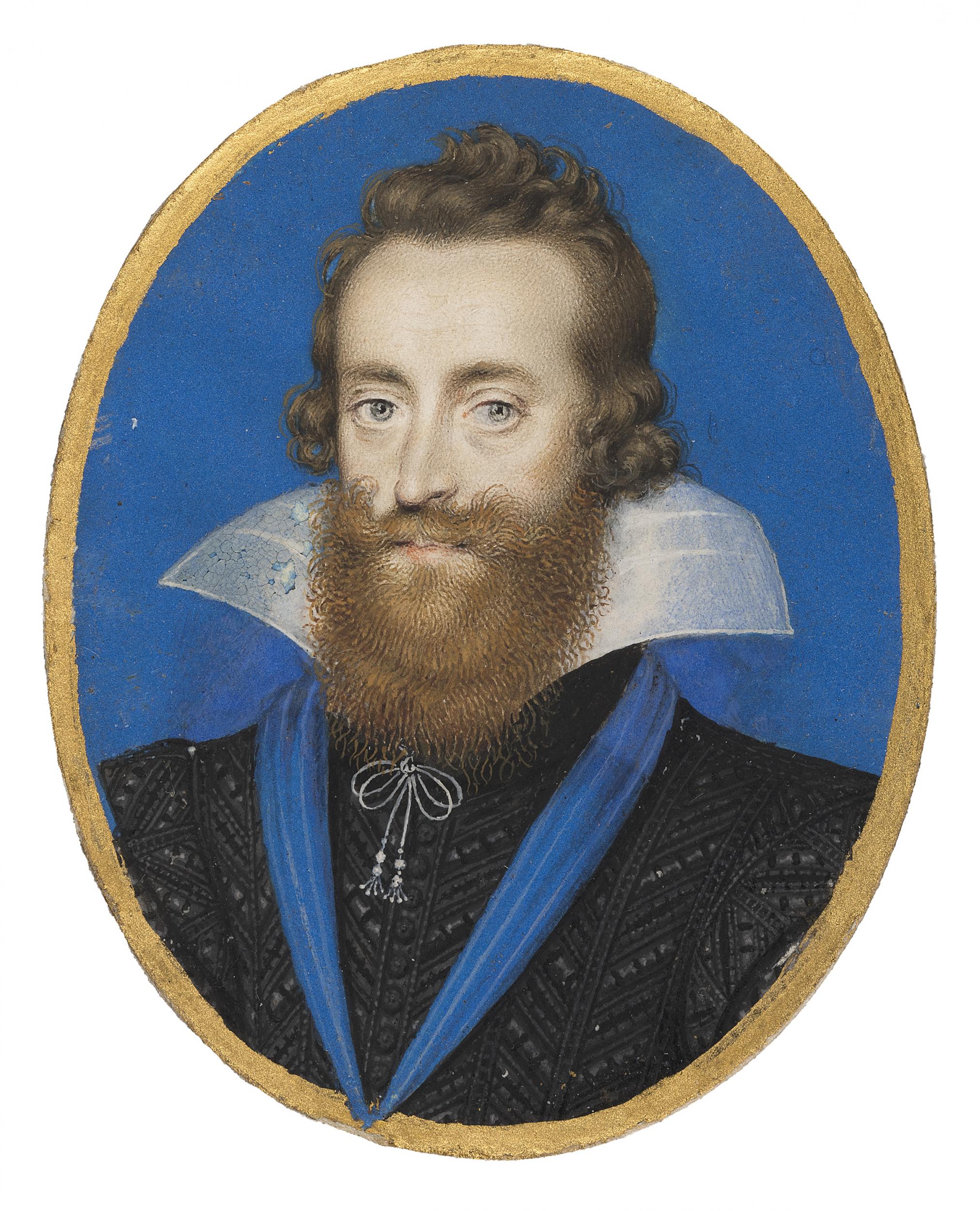 Ludovick Stuart, 2nd Duke of Lennox and Duke of Richmond 1574-1624, The Fitzwilliam Museum

How these miniatures are made is the subject of a short film and an excellent display at the National Portrait Gallery. Bright as enamel, they are, in fact, painted with something like modern watercolour – crushed pigment bound with gum – using humble squirrel-hair brushes. Colossal photographic magnifications show almost imperceptible stipplings and shadings: the single suave line by which Hilliard dashes off an eyelid; Oliver’s gift for a graduated blush. 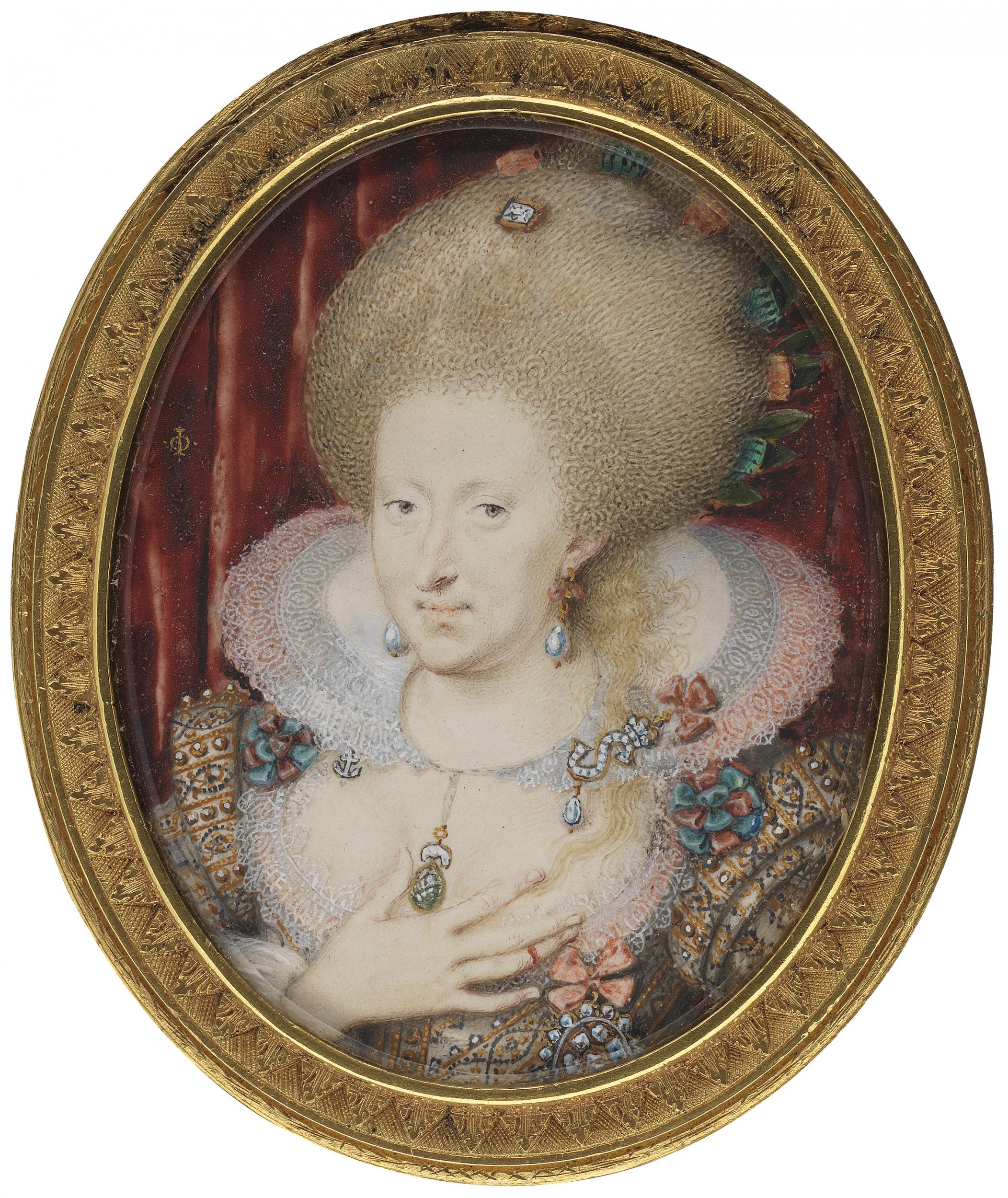 A steady hand was the merest requirement. These artists had to get a likeness down in two or three sittings lasting not much more than an hour – like Holbein or Van Dyck – but on a piece of vellum no bigger than a playing card. And cards were the commonest form of support; a portrait of Elizabeth I, in this show, has the Queen of Hearts glued to the back. There is wit in the miniaturist’s art.

And it is evident in the face of Hilliard himself, with all his questioning vitality. Sixteenth-century self-portraits are so rare in England that perhaps only three are known: two in oils and this far greater miniature, in which the young painter announces himself as an aristocrat. Exeter-born, London-trained as a jeweller, Hilliard saw the works of Holbein in England and Clouet in France (Elizabeth had trouble getting him home), and still he seems to have sprung fully formed from nowhere. 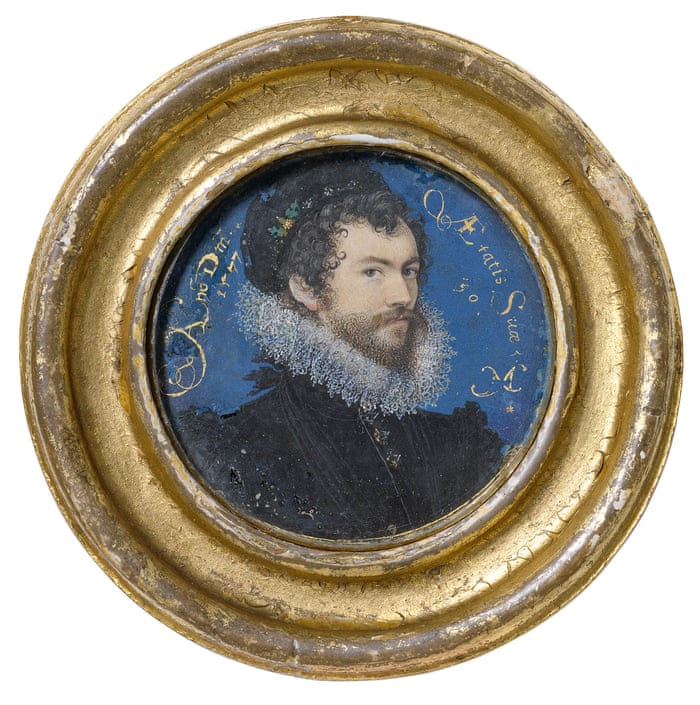 Oliver has speed, humour, open affection. His terrific portrait of the Browne brothers shows a trio of likely lads entwined like The Three Graces for a lark. His new young wife looks back at the painter with an equal degree of warmth. He appears more modern, continental, broader of stroke, better at perspective. Hilliard is more austere, yet also profound. 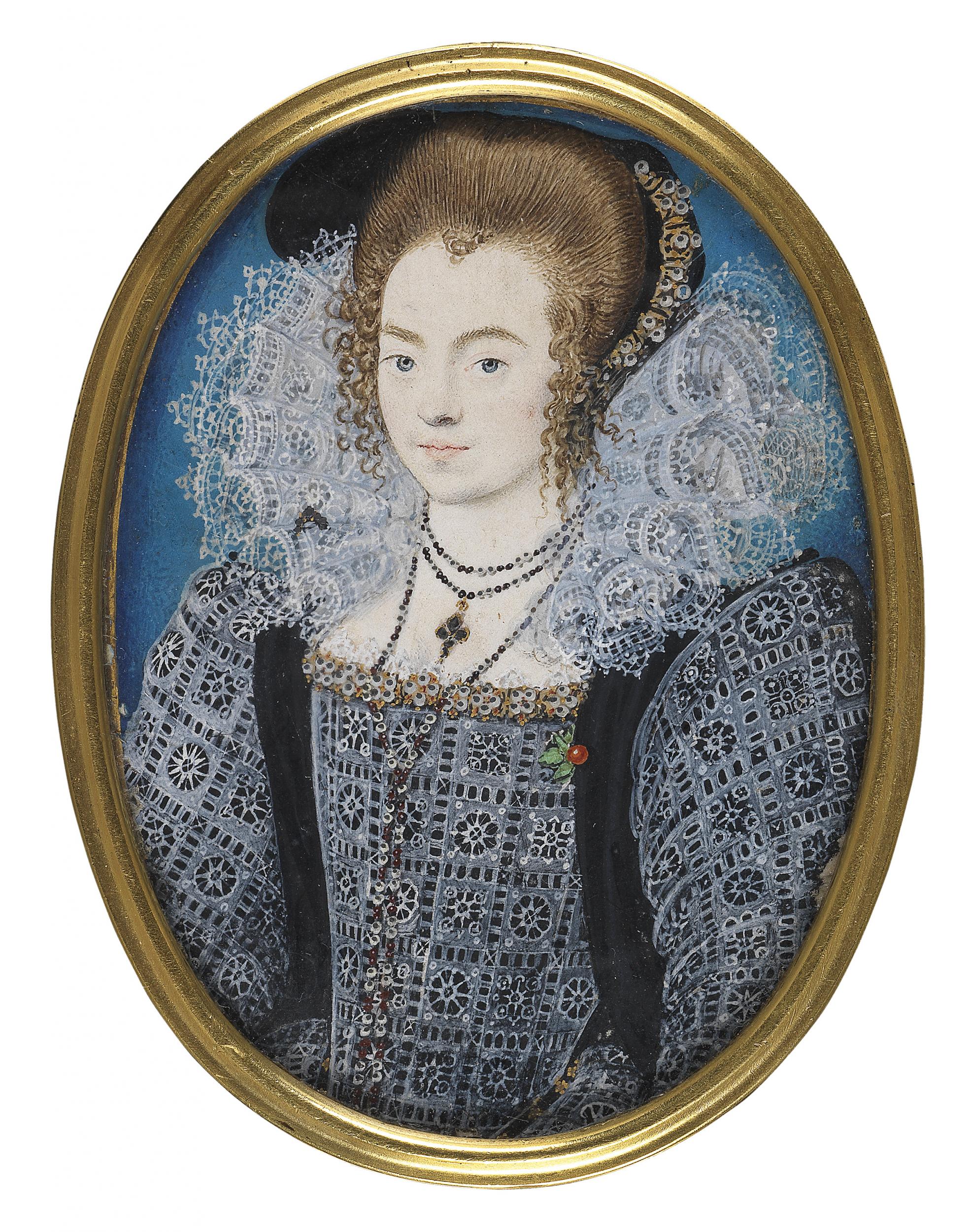 Hilliard wrote a treatise full of advice for fellow miniaturists. “Let your apparel be silk, such as sheddeth least dust or hairs.” Talk gently to keep your fidgety sitters (notably James I) from moving. Aim for the immediacy of a private encounter, and all “those lovely graces, witty smilings, and those stolen glances which suddenly like lightning pass”. For these images are unlike any other: intimate objects that may be kept in secret boxes or worn in lockets about the body, brought out for a moment and then hidden away; messages of love, to be passed from hand to hand. 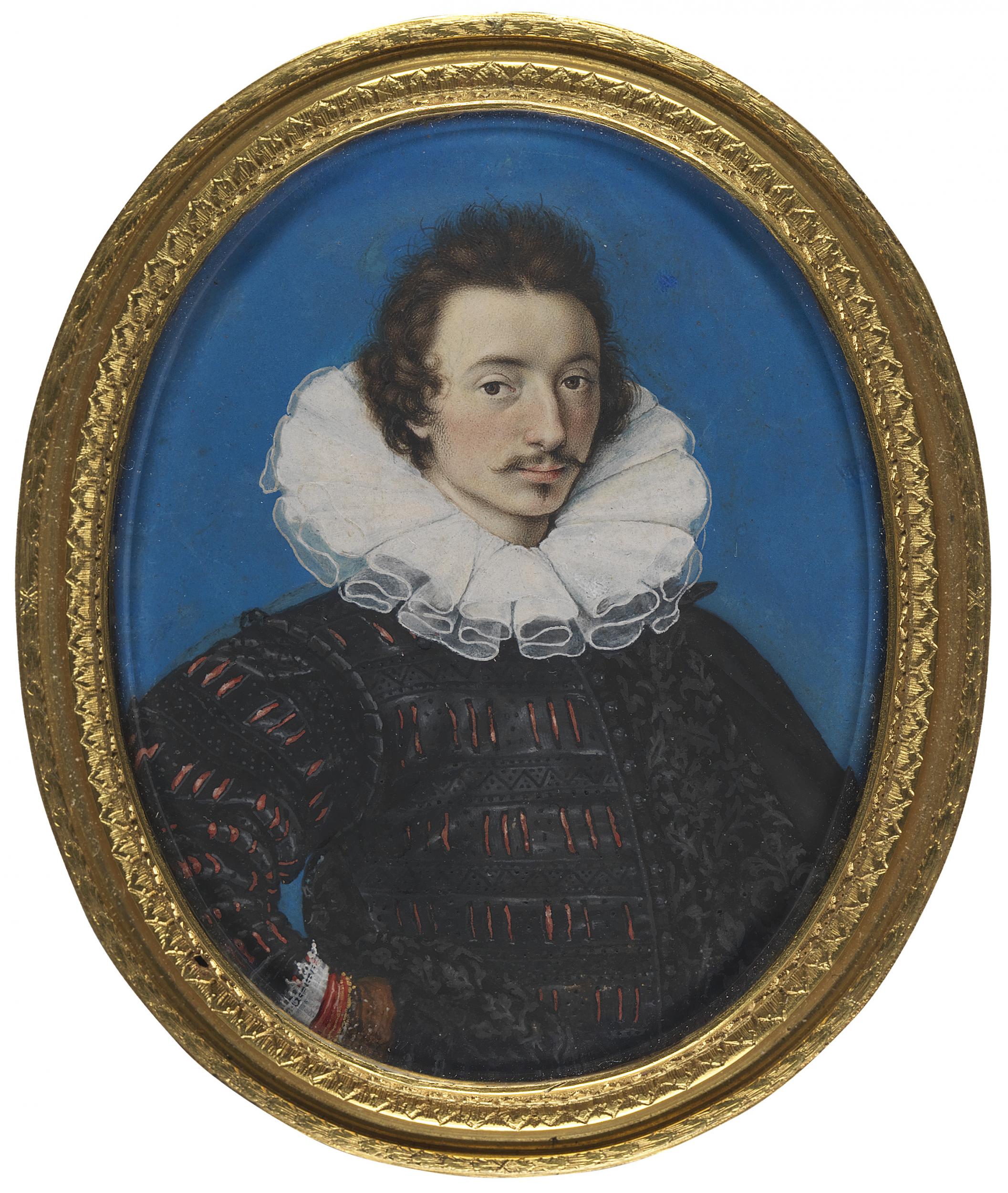 And this is nowhere more explicit than in Hilliard’s famously mysterious portrait of 1588, known as Man Clasping a Hand from a Cloud. The identity of the eponymous gentleman, with his pale eyes and fine golden tendrils, has never been established. Perhaps something in his black satin doublet and elaborate hat, trimmed with intricate silver lace, might have given a clue in his day. But descending from the transparent circles of cloud above is another hand cuffed with equally complicated lace. It might be male or female; certainly it is as slim and graceful as his own. 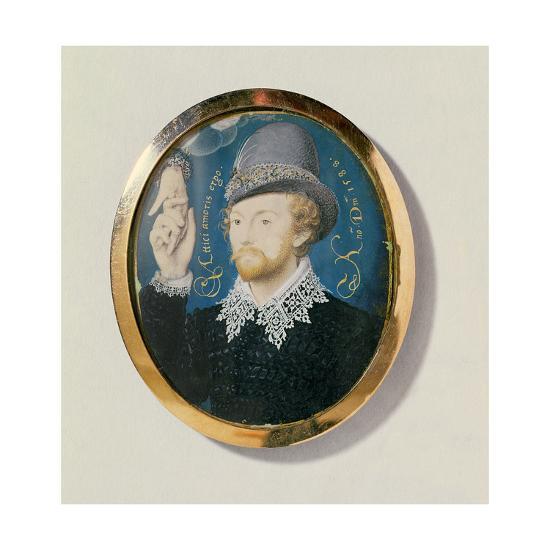 Man Clasping Hand from a Cloud by Hilliard, 1588

If Hilliard’s art draws you straight into the private lives of Elizabethans, this painting goes closer still to the sitter’s heart (quite literally, if it was meant to hang there). The gentleman clasps the hand of his beloved, who is perhaps dead and gone, but still looking down upon him from the afterlife, protecting him, accompanying him wherever he goes – like the miniature itself, a masterpiece as condensed as a sonnet.

● Elizabethan Treasures: Miniatures By Hilliard and Oliver is at National Portrait Gallery, London, until 19 May

https://www.npg.org.uk/whatson/elizabethan-treasures/exhibition/
Posted by Frank Black at 07:29