Orson Welles and Touch of Evil 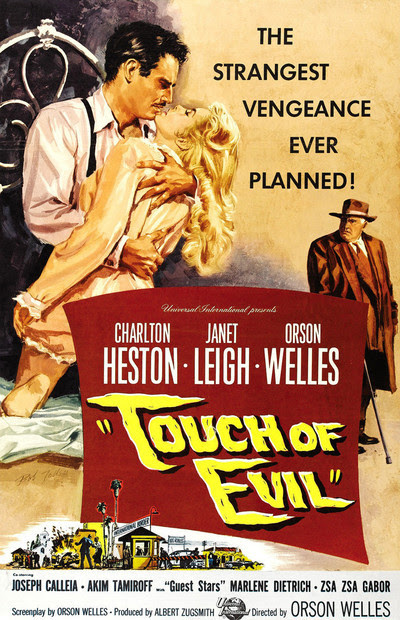 How Orson Welles shattered the Hollywood image
Big, grizzled, with spit and stubble, Orson Welles dismantled the notion of what a movie star should look like. As it returns to cinemas, Michael Newton celebrates his Touch of Evil, the last great film noir of Hollywood’s golden age

In Jonathan Swift’s Gulliver’s Travels, Gulliver finds himself in the kingdom of Brobdingnag, where the people are 60ft tall. Scale is everything; blown up to gigantic proportions the human face becomes rough, pitted, the seemingly immaculate skin unmasked as imperfect. In the 20th century, Brobdingnag transformed into the picture house, a place for the pygmy public to stare up at the great stars. However, far from seeming less perfect, the enlarged human face seemed more wonderful, smoothed-out by celluloid, unattainable. Yet still strangeness clung to these super-sized persons, those colossal faces.

Welles understood this, and so returned us to the Swiftian vision. In his movies, the human face that cinema loves and dwells on shows its potential for ugliness; blown up to the size of the cinema screen it looks not enchanted and godlike, but all too human and flawed. Time and again, the alienated gaze of his films confronts us with the astonishment of the human face, there in his use of closeups that come in too close. Somehow the angle of vision is off-kilter, and we see only the spit and stubble, the pockmarks and pores. This disabused image of people extends into Welles’s understanding of character. Unlike some Hollywood directors, he never lost sight of the blemishes in the human face and soul. He is one of the few film-makers of the American 1940s and 50s who is never kitsch. His films resist the Lilliputian proportions of a TV or a computer: they belong to the big screen.

Welles’s genius, too, was larger than life, a man with a talent always threatening to burst the bounds of the studio system it was supposed to flourish in. He was not only one of the most striking and inventive film-makers who have ever lived, he was also a curious example of the movie star, operating within mainstream cinema while simultaneously dismantling his audience’s conceptions of what a movie star might be. Just as Welles’s films began with words, with the things that his people say, so his presence rests in large part on the growling, rumbling cello tones of his voice. It is a curiously physical sound, one that summons up the body behind it. That feels apt, for in watching Welles’s work across more than 40 years, from Citizen Kane (1941) to F for Fake (1973), the metamorphosis of that body turns out to be where the attention lingers. On screen Welles embraced the collapse of his own handsomeness – the face’s wrinkles and carved-out lines, the grizzled hair, the ever-expanding waist. In Touch of Evil (1958), Marlene Dietrich fails to recognise Welles in the police detective, Hank Quinlan. Puzzled by the amazing degradation of that body, she lets him know, “You’re a mess, honey”, merely voicing what the audience was likely already thinking. Already in Citizen Kane, Welles had pictured his own ageing; he began his screen-acting career as an old young man, and he reached the summit of it, in Chimes at Midnight (1965), as a young old man, playing Falstaff, that corrupter of youth.

Following the abortive release of Kane and the mutilation by the studio of his next movie, The Magnificent Ambersons (1942), Welles’s career as a director was forever hampered in the US, while his life as an actor – and voice-over narrator - more or less flourished. For a while, he was both a studio problem and an authentic movie star; it delighted the gossip columnists that he was married to another star, the forces’ sweetheart, Rita Hayworth. Soon he fell away from being a leading man and launched into a lifetime of cameos and special appearances, the kind of actor who could salvage a film with a few good scenes. Yet in a clutch of movies – The Lady from Shanghai (1947), The Third Man (1949), Touch of Eviland his Shakespeare films, especially Chimes at Midnight, he is much more than that, being there what he had once been in Citizen Kane, an exemplary version of the compromised person, the perfect embodiment of our imperfection. 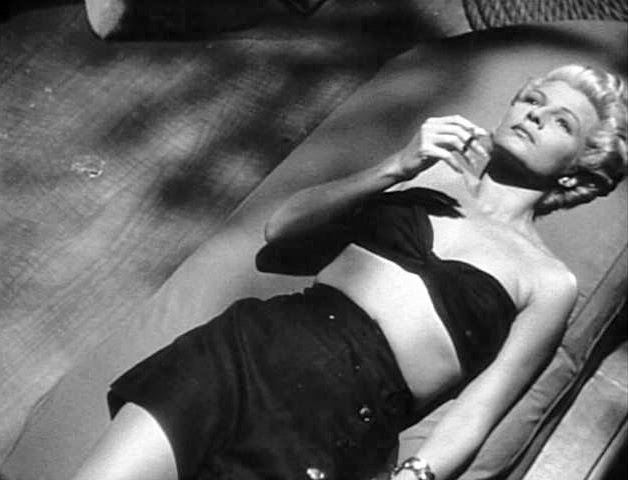 Directed by Welles as well as starring him, The Lady from Shanghai is a film noir composed of sweat and sleaze; it begins with a threatened gang-rape, takes us to a man who wants to be murdered and leaves us in a crazy, shattered realm where killing is just an expression of desire. The very inventiveness of the camera here makes the film seem sordid, trapping us inside a place of moral and visual distortion. Only a couple of years after Hiroshima and Nagasaki, the Bomb haunts this movie, lending an everyday story of marriage and murder an apocalyptic darkness. Watching the film, it becomes hard to shrug off the knowledge that people are incomprehensible, their motives obscure, their meaning occluded. At the end, it bewilderingly slips into using Mandarin, while Welles’s character, drugged, watches a Chinese opera, an art form naturally understood by the locals in the audience, but to him that is a baffling confusion. Everyone is ugly in this film, except the leads of course, and especially the sublime Hayworth, though her beauty (at Welles’s insistence – he made her cut off her long red hair) appears a concoction, a made-up peroxide blonde with sculpted eyebrows. As she moves among the drooling, ogling men, her skin looks smooth and clean – as though it has been carved from sugar icing. In this realm of confusion, Welles plays Michael O’Hara, a Hemingwayesque, independent man, a romantic dupe in a world where to be alive is to be in pain. Welles’s Irish accent is (to my British ears) an embarrassment of Dick van Dyke proportions, yet he here conveys as he could so well an injured sensibility, the pudgy naivety of a boy half-grown up into the life of the corrupt.

Though his movies tender a darkened sense of others, in this fabricated world Welles was himself both ringmaster and victim. As an actor, he was at his best playing saloon-bar Candides. Though he often played “villains”, he always brought to such roles a boyish joie de vivre that grants even the blackest characters a youthful unworldliness. He could find innocence in evil, and there is no better example of this than in his wonderful performance as Harry Lime in Carol Reed’s The Third Man (1949). 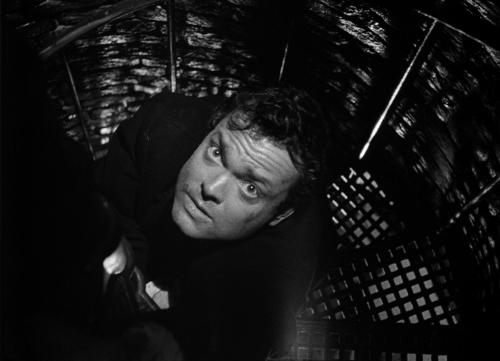 Lost inside that film, I can still imagine myself, just as I used to as an adolescent, as Holly Martins (played by Joseph Cotten), the feckless, foolish, well-meaning idiot that he is. And perhaps my entire romantic life has been coloured by my teenage admiration for Alida Valli as the elusive Anna. Yet I never dreamed for a moment that I could be Harry Lime, for between him and this viewer lay the unleapable chasm of charm. By some ineffable magic, Lime, like Welles, just makes everything seem such fun. Welles denied that cinema acting should be in essence understated, and indeed the keynote of all his performances is gusto. He was a man who couldn’t turn himself down. Though he never looks stagey and has none of that hitting-the-back-of-the-theatre impact that can make Laurence Olivier look overblown on film, he nonetheless fills the screen, simply by letting us share something of the energy and power that was part of who he was and part of how he performed himself to others.

After years away from Hollywood, Touch of Evil was Welles’s comeback film; in commercial terms, it didn’t work out, but as a movie it’s an amazing piece of work. While The Lady from Shanghai ushers us into strangeness, Touch of Evil places us inside a world of oppression, where bullies thrive and intimidation is the rule. It’s a noir that is genuinely black-hearted, the romantic colours of the genre blooming over only its two fading film stars, the worldly-wise Marlene Dietrich and Welles himself, playing the good bad cop, Hank Quinlan, a man who puts convictions and his hunches over the inconveniences of the law. It’s arguably Welles’s finest performance. He works wonders here; to take only one example, whenever anyone offers him some booze, as a reformed alcoholic he replies brusquely “I don’t drink”, until one time, when all is collapsing, he says it and then catches sight of the whisky glass he has just drained. Then comes the miracle of his performance: somehow Welles registers the jolt of the fact with an entirely blank face, signalling his own fall by apparently making no sign at all.

All Welles’s films feel delirious, replete with a weirdness that breaks up the standard Hollywood fare and shatters it into fragments, into a pattern of visionary shocks. In Touch of Evil, this hallucinatory intensity is especially strong; its beatnik thugs are out of a David Lynch nightmare, and the screen seems as drugged as its victimised heroine, played by Janet Leigh, who, as in Psycho, displays bad luck in choosing motels. Yet the drugs turn out to be not hallucinogens or narcotics, but sodium pentathol, the “truth drug” – much as Welles’s dark imaginings perhaps offer the unvarnished truth about things.

There is a touch of lament, an end-of-season feel about Touch of Evil, the last great film noir of Hollywood’s golden age. The movie contrasts the pianola (“it’s so old, it’s new”) with rock‘n’roll, and the faded glamour of the old stars, Dietrich and Welles, with the virile emptiness of the new guys, such as Charlton Heston. Old Hollywood was busy beginning to die, though maybe only Welles knew it then. From now on, his career lay back in Europe, and, in the 1960s and 70s, he became a great European art-house film director, still creating masterpieces.

Chief among them is his version of Shakespeare’s Henry IV plays, Falstaff: Chimes at Midnight. The film has so much that’s good – John Gielgud as Bolingbroke; one of the greatest, most brutal battle scenes of cinema – but in one respect it seems seriously deficient: it lacks laughter, and laughter is Falstaff’s essence. I believe that despite his humour and his humanity, Welles’s view of the world was too dark to bring out this element in the old fat knight. Yet he truly embodies other equally vital aspects of the character. In conversation with Peter Bogdanovich, Welles declared that everyone acts all the time, and that in each and every conversation we’re busy performing ourselves. Though this has its general application, and its Shakespearean resonances, it nonetheless feels less of a universal statement, more of a self-diagnosis. For Welles and Falstaff have much in common: both of them live as actors on the stage of everyday life, as self-dramatisers, as players. Watching the entertaining TV programme he made, Around the World With Orson Welles, you see just what a glorious flirt he was, how much he enjoyed acting the role of raconteur. Yet when he talks to a group of Chelsea Pensioners, he looks out of place, where the quiet dignity of the old men, the settled proprieties of their beliefs exposes their interviewer as a man betrayed by his own eloquence. Yet what eloquence it was! Welles is one of the few civilised voices in cinema, a Europeanised American, a preserver of urbane values. There’s a touch of Henry James about him, and of those wide-eyed cynics and sophisticated dreamers Hemingway and Fitzgerald. Talking to the Chelsea Pensioners, one mentions that they are officially “living in independent retirement”. “Great word, ‘independent’,” says one of the old soldiers. “Yes, it is,” says Welles. Everything about the worlds he summoned up in film and in his acting, the uniqueness and humanity of that sustained vision, shows that he meant it.