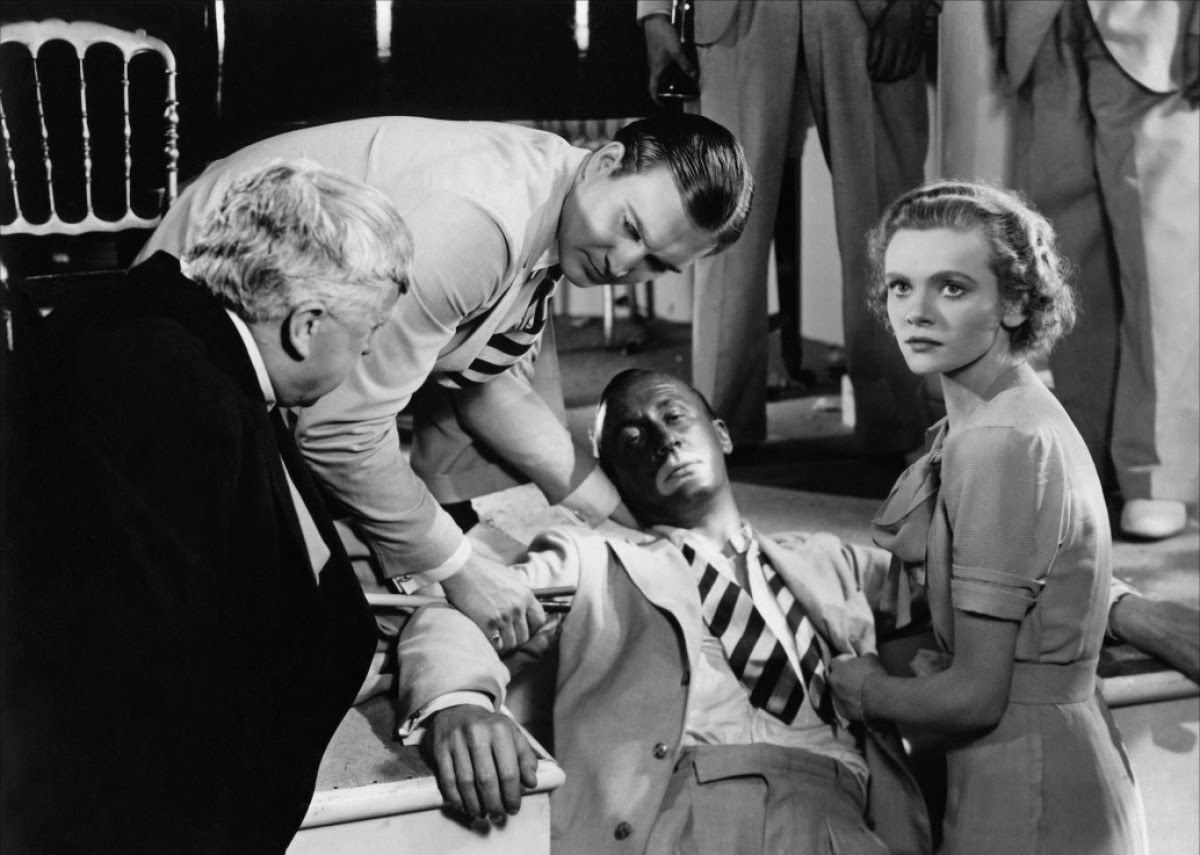 Nova Pilbeam, who has died aged 95, was celebrated in the 1930s as Britain’s leading child and teenage star on both stage and screen; yet her light guttered in the 1940s and thereafter she faded into total obscurity.

Thanks to DVD, however, she can still be seen at her peak in two films directed by Alfred Hitchcock. In The Man Who Knew Too Much (1934), made when she was 14, she is outstanding as a girl kidnapped by international terrorists in order to prevent her parents divulging vital information. Somehow Nova Pilbeam manages to be both precocious and charming, while in the last scene, when she is trapped on a roof with a killer, she convincingly portrays terror.

It must have been a daunting experience for a child suddenly to find herself sharing the screen with such established figures as Leslie Banks, Edna Best and Pierre Fresnay. The Man Who Knew Too Much was also the first English film of Peter Lorre, who had recently escaped from Nazi Germany, and had to learn his English lines syllable by syllable. Yet Nova Pilbeam did not seem a bit fazed by her sudden ascent to stardom. “Even at that time,” Hitchock remarked of her, “she had the intelligence of a fully grown woman. She had plenty of confidence and ideas of her own.”

In 1937 Hitchcock employed Nova Pilbeam again in Young and Innocent. In this film she took on a lead role as a chief constable’s daughter who finds herself helping a dashing young fellow (Derrick De Marney) being chased by the police for murder. Having begun the film as a distinctly bossy and self-sufficient girl, Nova Pilbeam convincingly transmogrifies, as the affair develops, into an emotionally vulnerable heroine. She never, though, quite conveys that the flames of her passion are white hot. In this respect her cut-glass 1930s accent hardly helps. As for her undoubted beauty , it is rather of the seemly than of the smouldering variety.

Nevertheless, it was a fine performance for a 17-year-old, in a film which is full of character and humour. In general Hitchcock directed according to a pre-ordained plan that did not encourage much individual scope in actors. Sensing, though, that too much instruction might take the edge off Nova Pilbeam’s youthful spirit, he spared her the rougher edges of his tongue.

The two of them got on well, and shared a strong affection for the dog which appeared in the film. Hitchcock actually extended the animal’s role, in order to keep it longer on the set.

He was incapable, however, of being entirely sweet with a leading actress. In one scene, in an old mine, Nova Pilbeam was dangled over a precipice for rather longer, she thought, than was strictly necessary. “I thought my arm would come out of its socket,” she recalled. At least, though, the hand to which she was desperately clinging belonged to her real-life admirer, the assistant director, and not, as appears in the film, to her co-star Derrick De Marney.


After Young and Innocent Nova Pilbeam seemed destined for a great screen career, but it somehow failed to materialise. She was considered for the lead role of Hitchcock’s next film, The Lady Vanishes (1938), but the part went to Margaret Lockwood; while the producer David Selznick wanted her to be the second Mrs de Winter in Rebecca (1940), but Hitchcock preferred Joan Fontaine.

Perhaps he decided that, for all Nova Pilbeam’s high competence as an actress, this decidedly English girl, whose feet were so very much on the ground, did not quite possess the necessary romantic allure. Was there not a touch of woodenness where intensity and passion were required?

In truth, Nova Pilbeam had probably been flung too early into cinematic stardom. It did not help, either, that Gaumont-British – the studio to which she was contracted – went bankrupt during the making of Young and Innocent. Though she would appear in several more films over the next 11 years, it became increasingly evident that she would, after all, never become a major figure in cinema.

Nova Margery Pilbeam was born in Wimbledon on November 15 1919 and named after her maternal grandmother, who hailed from Nova Scotia. Her father, Arnold Pilbeam, was stage manager for Sir Nigel Playfair at the Lyric Theatre, Hammersmith.

Educated privately in Wimbledon and Blackheath, Nova spoke both French and German by the age of 14. She made her first professional appearance aged 12 at the Savoy as Marigold, the first character to appear in Toad of Toad Hall. In 1933 she was in Nigel Playfair’s production of a play about the poet Francis Thompson, which transferred to the West End. This was followed by a stint at the Shaftesbury Theatre as the daughter of the American anti-slavery campaigner John Brown in Gallows Glorious.

At 14, Nova Pilbeam made her film debut in Little Friend (1934), as a neurotic but perceptive girl who senses that there is something wrong with her parents’ marriage. Critics heaped praise on this performance, contrasting her acting expertise with her diminutive figure. The Gaumont-British studio immediately signed her up on a seven-year contract, and presented her to Alfred Hitchcock.

While making The Man Who Knew Too Much, she met Penrose (“Pen”) Tennyson, the great-grandson of the poet, and Hitchcock’s assistant director. They would marry in October 1939 when she was still only 19.

Meanwhile Nova Pilbeam had gained James Barrie’s approval to play Peter Pan at the Palladium in 1935-36. Later in 1936 The Daily Telegraph’s critic, W A Darlington, bestowed high praise on her performance of Rosalind in an open-air production of As You Like It by the Oxford University Dramatic Society .

Soon afterwards she returned to the West End as a rather unconvincing Bolivian girl in The Lady of La Paz. Darlington wrote of “a very good attempt at something which is beyond her”. In the cinema she enjoyed another success as Lady Jane Grey in Tudor Rose (1936), which won her a medal from Film Weekly.

In 1939, two years after Young and Innocent, she finally returned to the screen in Cheer Boys Cheer, which has been seen as a precursor of the post-war Ealing comedies, playing a brewer’s daughter who falls in love with the son of her father’s business rival. Shortly after her marriage to Pen Tennyson, she appeared as Viola in a production of Twelfth Night in Oxford.

She was next seen in the cinema in Pastor Hall (1940), inspired by the life of Martin Niemöller, who had been incarcerated by the Nazis. In fact the film had been made before the war, with Nova Pilbeam in the role of Niemöller’s daughter, only to be shamefully shelved for fear of offending the Third Reich.

Meanwhile Nova Pilbeam’s husband, Pen Tennyson, had made Convoy (1940), the first film to convince the government of the value of the cinema as wartime propaganda. When he was commissioned into the Navy, Nova Pilbeam helped him to learn the Morse code by signalling decidedly un-nautical messages.

On July 7 1941 Pen Tennyson sent her a telegram from Scotland, where he was making films for the Navy: “Will be with you tomorrow – cheers.” An hour later he died in a aeroplane crash. To distract herself from her grief Nova Pilbeam returned to the studios to make Banana Ridge (1941) with Robertson Hare, from an Aldwych farce. She had always, however, preferred the stage to film, and after Tennyson’s death played only minor parts on screen.

Following a cameo appearance in the wartime propaganda film Next of Kin (1942), in 1943 Nova Pilbeam undertook four lead roles for the Old Vic Company, then on wartime exile from London in Liverpool. She was Nina in The Seagull; stepped out of character to play Belle, the peroxide-blonde prostitute in Eugene O’Neill’s comedy Ah, Wilderness; and took on Juliet opposite Laurence Payne’s Romeo. She also acted the title roles in Shirley and Susannah and the Elders.

Back in the West End, she supported Sonia Dresdel in This Was a Woman, which ran for several months. The next year she joined the Dundee Repertory Theatre, and in 1946 appeared as Tracy Lord in The Philadelphia Story at Windsor, where her father was now the theatre’s business manager.

Her final West End appearance, early in 1950, was in Toni Block’s Flowers for the Living. At the end of that year she married Alexander Hamilton Whyte, who worked in radio. She was still acting in 1951, but after the birth of her daughter, Sarah Jane, in 1952, withdrew completely and permanently into private life, apparently without any regrets.

Alexander Whyte died in 1972. For many years Nova Pilbeam lived with Sarah Jane in Highgate, where she tended her garden and declined various requests for interviews. She would, however, happily sign autographs if approached on the street.

For a time she was an unlikely muse for the artist and Warhol acolyte Duncan Hannah, who painted her over and over again but who never got to meet his heroine. “In my head she is always 19,” Hannah said in 2007. “I don’t know what it would be like to meet her now – I have pieced her together from those bits of celluloid.”

http://www.telegraph.co.uk/news/obituaries/11755749/Nova-Pilbeam-actress-obituary.html
Posted by Frank Black at 20:45