Lines Off by Hugo Williams - review 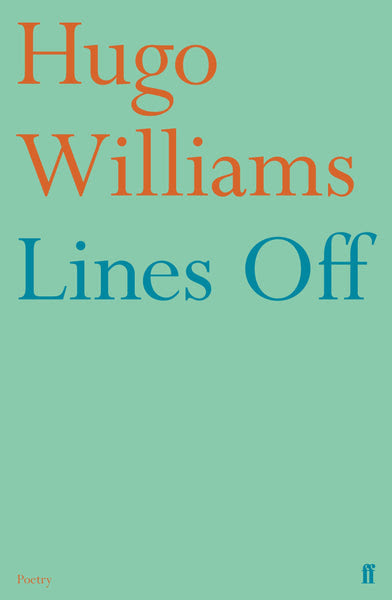 Lines Off by Hugo Williams review – fascinating reflections on body and mind
Inspired by a spell in hospital, Hugo Williams confronts the body in crisis with irresistible style

Hugo Williams’s “lines off” – a stage direction – were written during a period in which he had dialysis, followed by a kidney transplant. Hospitals are dramas in themselves – operating theatres appropriately named. In Transplant 2014, the surgeon is poised to give “the performance of a lifetime” (and let us not forget, Williams once worked as a theatre critic). But sickness and the surgeon’s knife do not necessarily make great poetry. What matters is Williams’s own writerly performance, his ability to rally while undergoing the trials of Job. It is the gallantry of his writing that moves. The raffish intelligence that makes all his poetry a pleasure to read does not desert him in extremis. There is – thank the NHS – never any sense of his being diminished on the page.

His old style cooperates with his new predicament even if hospital is not his preferred habitat. His gloom as he casts himself a has-been is offset by the doctor’s disbelief (in The Check-Up) that he has survived:

“Oh yes, we thought he was a goner,”
the doctor tells his student nurse.
She looks at me admiringly,
imagining me dead. I take a little bow.

Readers – particularly older ones – will be tickled by his sense of the body as a docile soldier, continuing to oblige

There are not many openings for dandies on hospital wards, but there is reason to swank a little about a faithful servant in Dear Arm. Readers – particularly older ones – will be tickled by and recognise Williams’s sense of the body as a docile soldier, continuing to oblige. But the body is not always compliant. And if performance is the thing, what happens when you “dry”?

What is fascinating about this collection is Williams’s curiosity about the body in crisis. The most impressive poems are about what happens when the mind temporarily unfastens itself. In My Absence describes this state as another country (from whose bourne this particular traveller has returned). It is vertiginous, alpine and avalanche-rich:

I’m buried alive
in an abstract expression
of blizzards and ghosts,
blubbing, terrified, lost,
as I try but fail to exist.

The schoolboy’s word “blubbing” tempers our pity and underscores a resolve never to take himself too seriously, not to let what Patrick White once called “luxurious self-pity” rule. But if sickness is a landscape to be navigated – and Williams has a generous sense of its metaphorical scope – its precise geography repeatedly eludes him. And in Fall Zone (Royal Free Hospital), bad weather spreads to his notebooks, which have by now become a territory in themselves, assailed by “a blizzard of crossings-out”.

In Carphology, there is irresistible comedy in the account of how the human need for purpose translates to the hospital bed:

Since we are here, we reason,
we might as well get on
with collecting bits of fluff
from our hospital blankets
and placing them in piles
against a rainy day.

And several autobiographical pieces would serve well for that rainy day. These are beguiling poems that look back at childhood, sepia set pieces from the mind’s family album (My War, Tea-time). But they lack the urgent strangeness of the hospital poems. Williams has a gift for making poetry read as effortlessly as conversation – a huge accomplishment. And the final poem, The Half-Open Door, is so simple it barely exists, beautifully balanced between the pedestrian and profound. If it has a metaphorical implication, it is light as a coat slung over an arm:

Hat or umbrella?
Raincoat or windbreaker?
It’s hard to be sure
when the sun is shining
and rain is falling
from a clear blue sky.

How many times, dear arm,
have you put yourself in danger
for my sake? How many times
have you found your way home
through the dark, or saved me from falling?
I didn’t have to ask you twice.
Poor arm! I broke you once.
I burnt you once. More than once
I cursed your weakness
at arm-wrestling and swimming,
but I was proud of your tan
when I rolled up my sleeve at school.
You aren’t so handsome now,
but you soldier on, one of the faithful
in my band of volunteers,
my noble standard bearer
in the war within a war,
the daily clash of purposes.
Dear arm, hold still for me now,
while I make you suffer once more.
Be brave, while the surgeon
creates an “access fistula”
that will wash my blood for me.
It seems you must save my life as usual.

https://www.theguardian.com/books/2019/jul/09/lines-off-hugo-williams-review?CMP=twt_books_b-gdnbooks
Posted by Frank Black at 07:08