Lloyd Bridges, father of FNB heroes Beau and Jeff, is the star of this 1950 sci-fi movie that, along with Destination Moon, helped kick off the sci-fi film craze of the 50s.

This was originally meant to be a 3D film in colour but due to technical problems, Warner Brothers went with wide-screen black and white; however, the titles were in colour on a black and white background to grab the audience from the start.

The crew of a spaceship are dispatched one by one by a mysterious creature that has boarded the craft. This is believed to be one of the films that inspired the plot of Alien. Marshall Thompson may be more familiar from the TV series Daktari.

The old 'nuclear testing disturbs monstrous creature' plot. Rare starring role for Kenneth Tobey who had also been the lead in The Thing from Another World(1951). 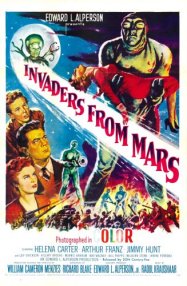 A classic of the genre; however, director William Cameron Menzies had seen better days, including Things to Come and The Thief of Bagdad, Duel in the Sun, for which he was one of several uncredited directors.

Supposedly inspired by the successful rerelease of King Kong in 1952; in turn, the story featuring a creature unsettled by a nuclear blast allegedly inspired many other films like Them! and Godzilla. The dinosaur bones were the same set from Bringing Up Baby!

This is more like it. Strange guys from outer space and a girl wearing a tight red sweater over breasts that look like a relief map of the Andes... Look at those rouged lips and staring eyes that we're familiar with from countless other posters!

Classic poster that has many of the key points of the genre: Giant crab grabs sexy blonde girl who isn't wearing much. A real Corman B-movie!

This is the re-titled 1954 Toho Studio production Gojira with added footage of Raymond Burr as an American reporter. It was cobbled together by Jewell Enterprises in 1956, even though the original had been released in the US in 1955, though largely to cinemas that catered for Japanese-American audiences. To confuse matters further, the Burr version was released in Japan in 1958 and was a hit!

Made in 3D but rarely shown in that format because the craze was dying down. Herbert Marshall is a long way from The Enchanted Cottage and his work with Hitchcock...

Another stone cold classic. The first remake, directed by Philip Kaufman in 1978 is also good and features the director and star of the first version, Don Siegel and Kevin McCarthy, in small roles. Avoid the later Body Snatchers, loosely based on this one and directed by the man who brought the world Bad Lieutenant, one of the most unintentionally funny films I've seen.