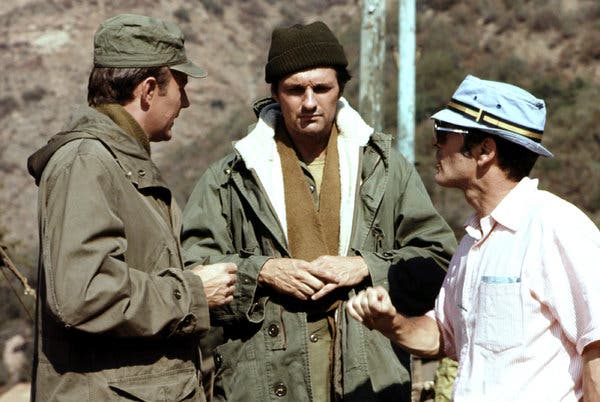 Gene Reynolds, 96, an Architect of ‘M*A*S*H,’ Is Dead
He also helped bring another acclaimed series, “Lou Grant,” to television.

Gene Reynolds, an Emmy-winning producer and director who was a force behind two of the most acclaimed television series of the 1970s and early ’80s, “M*A*S*H” and “Lou Grant,” died on Monday in Burbank, Calif. He was 96.

He wife, Ann Sweeny Reynolds, said the cause was heart failure.

Mr. Reynolds started his prolific career on the performing side of the camera, appearing in some 80 films and television shows, beginning when he was a child. He developed an unusual sort of specialty: playing the younger versions of characters played by top film stars of the 1930s.

Mr. Reynolds racked up dozens more TV and film acting credits, including more than 40 in the 1950s, but by the end of that decade he had shifted his focus to directing and, soon after that, to producing.

In the 1960s, he directed numerous episodes of television comedies, including “Hogan’s Heroes” and “F Troop,” both of which found humor and absurdity in military settings. That experience served him well in 1972, when, at the instigation of the producer William Self, he helped Larry Gelbart develop “M*A*S*H,” the sitcom about an Army hospital during the Korean War. (Robert Altman’s film, based on Richard Hooker’s novel, had come out two years earlier.)

The series, addressing serious themes with a mix of slapstick and dark humor, is still considered one of the finest in television history. Its final episode, in 1983, set a ratings record. By then, though, Mr. Reynolds had moved on and already had another acclaimed series to his credit: “Lou Grant,” which he helped create in 1977, the year he left “M*A*S*H.” The show, about a fictional newspaper, with Ed Asner as the title character, twice won the Emmy Award for outstanding drama series.

Mr. Reynolds directed episodes of each of those series (including the first episodes of both), winning two Emmys himself for outstanding direction of a comedy for “M*A*S*H.” He won six Emmys in all, including one for “M*A*S*H” for best comedy series and one for an earlier show he developed, “Room 222,” which was named outstanding new series of 1969-70.

One of the most memorable moments of “M*A*S*H” that he directed was not a specific episode, but the opening sequence, which shows two helicopters landing at the medical unit, presumably with casualties aboard. Mr. Reynolds had wanted a shot of nurses running to help. Several assistant directors tried but failed to get the effect he was after, as the actresses were “just kind of trotting along,” as Mr. Reynolds put it in an oral history recorded for the Directors Guild of America (of which he was president from 1993 to 1997).

He took over and gave the women a simple direction.

The resulting shot, which shows five determined women racing straight at the camera, is among the show’s signature images.

Eugene Reynolds Blumenthal was born on April 4, 1923, in Cleveland and grew up in Detroit. His father, Frank, was a businessman who later went into real estate, and his mother, Maude (Schwab) Blumenthal, was a model before becoming a homemaker.

“I was a very energetic child,” Mr. Reynolds said in an interview for the book “Growing Up on the Set: Interviews With 39 Former Child Actors of Classic Film and Television” (2002), by Tom Goldrup and Jim Goldrup, “and my mother mistook that for talent.”

She took him to an acting group for children, and soon he was appearing in radio commercials and amateur plays. After the family moved to California when he was about 11, he began working as an extra in TV shows and movies. One of his first roles was in the 1934 Laurel and Hardy film “Babes in Toyland.”

He appeared in movies with other child and teenage stars, including Shirley Temple, Mickey Rooney and Judy Garland. He set aside his film career when World War II broke out, enlisting in the Naval Reserve Officers Training Corps and serving on ships including the destroyer-minesweeper the Zane.

“Herman Wouk was the senior watch officer,” Mr. Reynolds recalled in “Growing Up on the Set,” “and he would get up every morning very early and would write.” In 1951, of course, Wouk published his Pulitzer Prize-winning novel, “The Caine Mutiny,” which drew on his experiences on that ship.

After the war ended in 1945 Mr. Reynolds earned a degree in history at the University of California, Los Angeles, and resumed acting. He landed few leading roles, though, and became frustrated with his career progress. Soon he was directing episodes of some of the most popular series of the 1960s, including “Leave It to Beaver,” “The Andy Griffith Show” and “My Three Sons.”

Among his biggest television successes before “M*A*S*H” was “Room 222,” a comedy-drama about a black teacher, for which Mr. Reynolds served as executive producer. It ran for more than 100 episodes and tackled subjects including prejudice, drugs and dropouts.

“It was a tumultuous time, and I think we took advantage of it,” he said in an oral history for the Television Academy Foundation, “but unfortunately ABC looked at numbers and said, ‘This could be funnier.’” He was shown the door, right when Mr. Self was looking for someone to bring “M*A*S*H” to television.

Mr. Reynolds’s first marriage, to Bonnie Jones, an actress, ended in divorce. He and his wife, also an actress, married in 1979 and lived in Los Angeles. In addition to her, he is survived by a son, Andrew.

“M*A*S*H” is a classic example of ensemble acting, and members of the cast often credited Mr. Reynolds with the chemistry that made the show work.

“It started when Gene Reynolds was producing the series,” Mike Farrell, who starred in the show for most of its run alongside Alan Alda, Loretta Swit and others, told The Boston Globe in 1979. After a table read of the week’s script, he said, Mr. Reynolds would invite the cast members to offer suggestions.

“This is unheard-of in television,” Mr. Farrell said. “On most shows they not only don’t care what the actors think, they would prefer actors who don’t think.”