Philip Larkin behind (and in front of) the camera 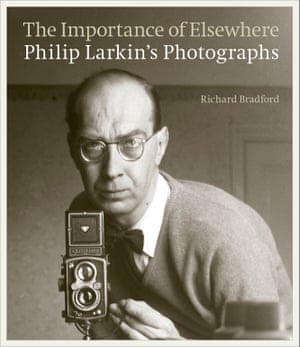 Larkin with his camera. He used photography to sharpen his connection with ‘that fuller and more sensitive response to life as it appears from day to day’ towards which he was also striving in his poetry. In photography, as in poetry, his aim was, ‘to construct a ... device that would preserve an experience indefinitely by reproducing it.’ 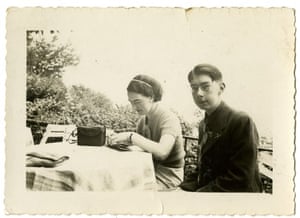 Philip Larkin aged 14, with his sister Kitty, during one of the family’s trips to Germany, in 1936. Larkin didn’t say much about the political situation they would have encountered there, but he wrote that their father, Sydney, “liked jolly singing in beer cellars, three-four times to accordians…” 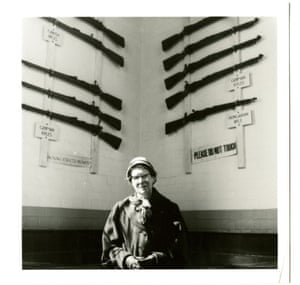 Larkin’s mother Eva. The poet wrote to Monica in 1954: “you must never come back ... till she is dead and gone if you want a quiet life, which suggests that some morbidly humorous intent went into his carefully posed photograph in a museum of wartime memorabilia near Loughborough. 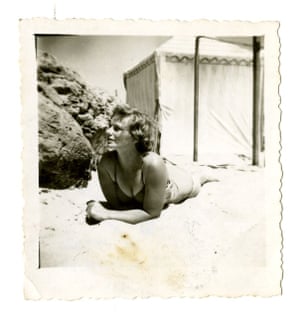 Hilly Kilmarnock, sunbathing in Swansea, at the time when she was married to Kingsley Amis. She wrote to Larkin in 1950: “I’m sick to death of all the men I love and admire going off with other women, usually much better looking than me. There’s Kingsley with Barbara and Terry … I’ve got a weekend off in April, when I shall be going to London. I dream that I’m meeting you there, and that we’ll have loads to drink and then go to bed together, but alas, only a dream.” 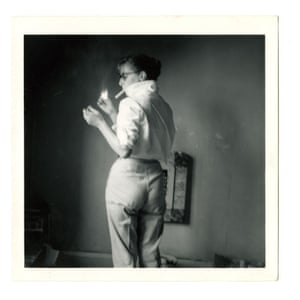 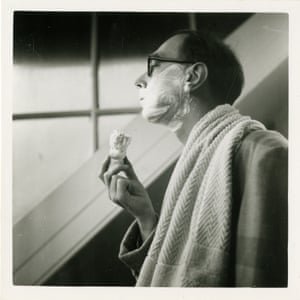 This self-portrait is one of four taken on the same day in 1957, as if to record a day in Larkin’s life. The others show him reading the newspaper over breakfast in his dressing gown, smartly dressed for work, and back at his flat in the early evening in casual clothes. 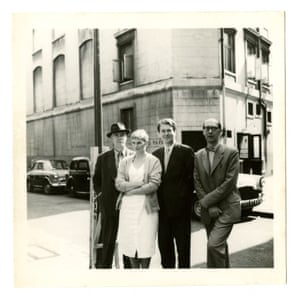 Larkin (right) with Hilly and Kingsley Amis and Anthony Powell (left) after a lunch at the Ivy in London in 1958. Though Powell came from a different era and class, he admired the new generation’s apparent commitment to elegant readability. Larkin wrote of Powell, that he was charming and funny, “at least he never says anything really funny, but he’s full of droll anecdotes and laughs a lot, so one imagines he’s funny. He dresses in a country style and has a big red spotty handkerchief to wipe the tears of laughter away with.” 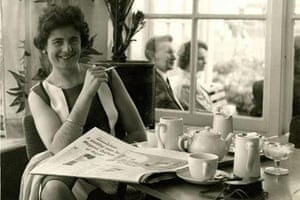 The writer Maeve Brennan at breakfast in a hotel in Hornsea where she had spent the night with Larkin in 1963. Brennan was the subject of his unfinished poem The Dance, about a university social evening she had persuaded him to attend against his will at Hull. He wrote: “Chuckles from the drains/ decide me suddenly: Ring for a car right now. But doing so// Needs pennies, and in making for the bar/ for change I see your lot are waving, till/ I have to cross and smile and stay and share/ Instead of walking out.’ 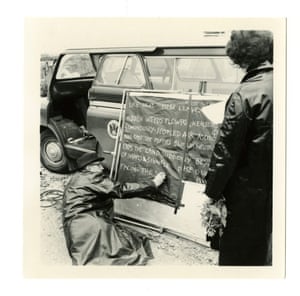 When The Whitsun Weddings was published in 1964, John Betjeman wrote in The Listener that Larkin had become ‘the John Clare of the estates’. Here Betjeman chalks up he final stanza of Larkin’s poem, Here, for a BBC film portraying the poet in the industrialised landscape north of Hull: ‘Loneliness clarifies. Here silence stands /Like heat. Here leaves unnoticed thicken,/ Hidden weeds flower, neglected waters quicken...Here is unfenced existence:/ Facing the sun, untalkative, out of reach.’ 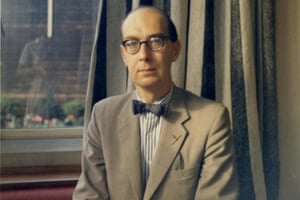 Larkin in Scotland, photographed by Monica, whose reflection is visible in the window pane. Although the barn-like church in the background with its strident cross is unlike the gently decaying buildings that informed his poem, Church Going, this carefully composed image reiterates Larkin and Monica’s interest in the vestiges of faith.

http://www.theguardian.com/books/gallery/2015/nov/24/the-photography-of-philip-larkin-in-pictures
Posted by Frank Black at 07:31