Bill Murray at The Baltic, Gateshead 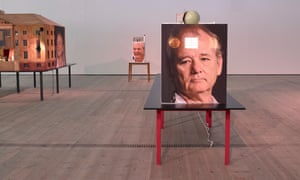 ‘I’m interested in his Murrayness': Bill Murray exhibition opens in Gateshead
Artist Brian Griffiths says it was Hollywood star’s attitude that inspired him to create the show at the Baltic centre for contemporary art

A20-metre image of Bill Murray looks out over the river Tyne; inside the Baltic centre for contemporary art the actor is everywhere for an exhibition he probably knows little about.

“I’m interested in his Murrayness,” explains Brian Griffiths, responsible for the show, Bill Murray: A Story of Distance, Size and Sincerity, which imagines the pastimes of the Hollywood actor.

Using Murray as his muse, the artist has created a sculptural show with objects scaled both up and down as a way of exploring how we experience and measure things.

Outside the Gateshead gallery is the Murray banner; inside Griffiths has created a Murray-inspired fantasy landscape of model houses and imagined Murray activities involving a miniature whisky bar, a helicopter and a grand piano.

“He is very good material,” says Griffiths who is known for using found objects, among which Murray could be counted.

Griffiths says it was Murray’s attitude that inspired the show. It is “Bill the global superstar, the guy-next-door, the anti-brand brand, the irrepressible Lothario, the lovable gruff, the wise cracker, the emotionally brittle, the lost man, the free-wheeling guy, the uncle you-never-had, the dignified clown, the droll philosopher and the hopeful.”

It opens to the public on Friday, although the huge photograph of Murray taking a photograph of photographers at the Cannes film festival was placed on the riverside front of the Baltic on Monday and has been a popular selfie background all week.

Inside there are pictures of both a smiling and a serious Murray everywhere you look, along with nine model houses installed on tables, including a Los Angeles beach house, a faded art deco mansion and an ocean adventure dome.

If visitors put their ear close to one window they might hear classical music coming out of the clock radio. “It is a fantasy landscape,” says Griffiths. “I would call it a metaphysical adventure story with Bill. For me, Bill is an object in the show and an image in the show... we all know Bill. He has to some extent become my leading man.” 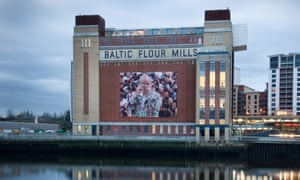 The show is also an exploration of scales and sizes, so it is a huge room with a big star and small houses into which visitors can peer as if they were giants. On the mezzanine level, people can look through a graphoscope at the ant-like visitors down below.

Similarly Murray is a big, Hollywood star who is very unlike a big star. He is known for his films - among them Ghostbusters, Groundhog Day and Lost in Translation - and for his eccentricities. He reportedly has no agent or manager which makes it tricky for people to send him scripts.

Griffiths says: “The ambition is that scales, points of view and sizes are all in flux. In the end you have to measure up to the works. I’m fascinated by how scale and size works generally.”

He has tried to make contact with Murray but does not know if he was successful. “He is difficult to get hold of ... he seems to live a very particular life.”

The actor’s eccentricities have inspired a website that documents incidences of him just turning up to things. Whether he makes it to Gateshead remains to be seen.

• Bill Murray: A Story of Distance, Size and Sincerity is at the Baltic centre for contemporary art from 20 November to 28 February 2016

A complex assemblage of these architectural models, light, everyday objects and a documented performance of Bill Murray creates a metaphysical adventure story and a fantasy caricature complete with whisky minibar, grand piano and helicopter.

BILL MURRAY: a story of distance, size and sincerity is an exhibition that enjoys and considers the effects of small, miniature, big, gigantic, the scaled up and scaled down, detail and overview. It is an exhibition that questions how one experiences and measures things. It encourages comparisons and differences, instabilities and slipperiness and attempts to use exaggeration as a means of revelation. This exhibition strives for both intimacy and grandeur, to present production and consumption and hopes for imaginative flight from humble objects.

Griffiths has also reproduced an image of Bill Murray at Cannes Film Festival as a 20 metre-long banner, which will appear on BALTIC’s north facade for the duration of the exhibition, playing once more with degrees of scale.

Since the early 1990s Brian Griffiths has been making sculptures and installations with overblown theatricality and pathos. He uses found and made objects to consider our complex relationships with the material and social world; how we use objects to make meaning, to make and re-make ourselves, to organise our anxieties and affections, to sublimate our fears and shape our fantasies.

Bill Murray is always authentic. He is consistently ‘BILL MURRAY’. His singularity breaks into irreducible ambiguities and contradictions – Bill the global superstar, the guy-next-door, anti-brand brand, irrepressible lothario, dignified clown and droll philosopher. This exhibition takes these and many other characteristics as an approach, turning them into a fantasy caricature and a poetic tableau of scaled down architecture and collections.
http://www.balticmill.com/whats-on/brian-griffiths
Posted by Frank Black at 07:34