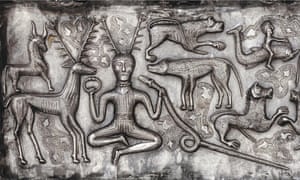 An inner plate from the Gundestrup cauldron, c150-50BC

He towers above you with his slit of a mouth and his alien frown, eight feet of glowering blond sandstone. The nose is a wedge, the eyes deep shadows and the brows conjured in a single fierce shelf. One arm is before, the other behind, and it draws you into a mystery. For this horned figure is not one man but two: the statue is Janus-faced.

He looks like nothing on earth, this frightening man with two faces (or was he a god?). Certainly he does not look Celtic. So it is only right that the British Museum’s staggering new blockbuster should open with this 2,000-year-old statue, found in a German field. For it turns out that the Celts are not quite what we thought. We may associate the word “Celtic” specifically with Scotland, Ireland, Wales, Cornwall, the Isle of Man and Brittany, but the name was first used around 500BC by the ancient Greeks, who used it to describe people living all over northern Europe. 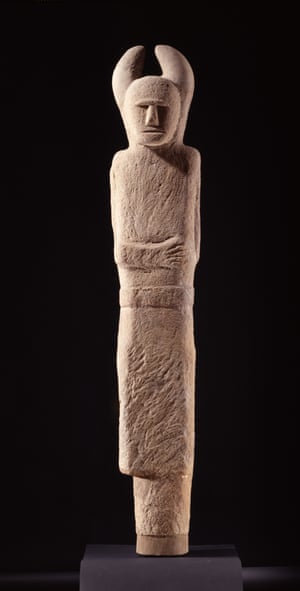 Two-faced sandstone figure from Holzgerlingen, Germany, c500-400BC
So it is the sculptor who made the dragon-hinged jug in this show around 400BC in France, and the jeweller who twisted gold into shining bracelets in Germany around the same time. It is the soldier in what is now Bulgaria, whose chariot was fitted with owl-eyed human faces, and all the people who supped from a massive silver cauldron, a bull and a woman warrior at its base, found in a Danish peat bog in 1891.

But do not imagine that this show is some dry revisionist project. From the very start it does what the British Museum does best, which is to unfold our human history through objects. And no matter how improbably vast this new Celtic diaspora may sound, no visitor could fail to see that there is something (perhaps the only thing) that unites so many peoples over more than a millennium – namely, their art. 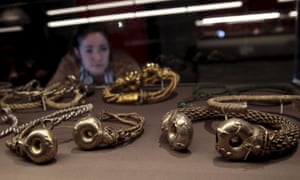 Torcs from the Snettisham hoard on display at the British Museum as part of the Celts: Art and Identity exhibition


Celtic art is the plait, the knot, the twist, weave and twine; it is the double-headed man or critter. It is ringed crosses, wavy lines, weird animals and serpentine forms; it is the swirling, the ambiguous and the abstract.

Slab of grey sandstone with a cross on one side. From Monifieth, Angus, Scotland, c. AD 800–900. National Museums Scotland


And what an astoundingly strange aesthetic this is. Anyone who has been to Iona and walked from the sea’s edge up to the Celtic cross where pilgrims stopped to pray 1,000 years ago will know the shock of it – the sandstone cross, sheer and knotted, rises high to the sky yet is wafer thin. Like Daniel Burnham’s Flatiron building in New York, so narrow, so fragile, you cannot imagine how it stays upright. 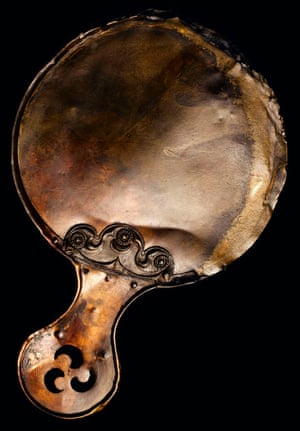 
A bronze shield – long, rectangular, undulating like an art nouveau panel – bears the outline figure of a boar. But this is no squat hog; its legs are prodigiously elongated and as elegant as the twining tendrils on nearby flagons. It is pure Charles Rennie Mackintosh.

Why describe a boar this way? Why depict a horned snake, a cat swallowing its own tail or a dragon with two heads? There is a profound anti-naturalism in Celtic art that insists on exaggeration, that tells you that this is a wild world of visions, myths and fantasies. What could be stranger than the bronze lynchpin that shows three legs whirling like a Catherine wheel, prefiguring the Isle of Man flag a millennium in advance?

There are doubles everywhere – two-faced men, two-headed serpents, two-sided mirrors etched with swaying Celtic triangles. A stone cross from Shetland is carved with early Christian figures, but also a pair of nightmarish hybrids, half-human, half-bird; they could be straight out of Goya’s Caprichos. 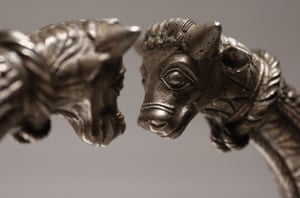 The organisers (from the British Museum’s exceptional generation of young curators) are surely right to suggest that these objects are all that remain of lost myths. Consider the immense Gundestrup cauldron, with its reliefs of a female warrior jumping like some Twyla Tharp dancer, a giant dipping another warrior in a smaller cauldron and a helmet taking flight in a bird’s claws. You follow the stories frame by frame, like a graphic novel.

The Celts left no writing – amazing fact – so now imagine, the curators urge, what the intricacies of their lines might have meant. The horned helmet thrown into the Thames near Waterloo 2,000 years ago has a showstopping form – a heavy-metal jester’s hat – but is also minutely inscribed with scrolling incisions and swirls; surely some kind of pictographic language. 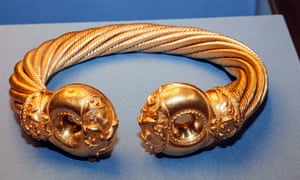 
It would be hard to overstate the abstract beauty of many treasures. The most exquisite piece of jewellery I’ve ever seen is in Celts – a twisting ribbon of bright gold fashioned into a necklace, so light it could blow away like a leaf. The double-helix twists look so easily made – but they were not. The mystery of their method was only recently deduced by a contemporary goldsmith, who worked out that the gold may have been beaten around the horns of a young animal to get these seashell whorls. And if this sounds magical, another torc here is somehow gilded with mercury. 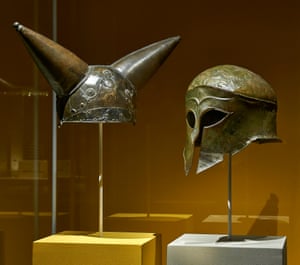 A horned helmet from the Thames, 200-50 BC alongside a bronze Greek helmet, south-western Greece, around 460BC

Abstraction predominates (you have to look hard for the hidden faces, sometimes no more than an eye or miniscule mouth). A golden snake bracelet from Pompeii, highly realistic, is shown next to a Celtic bracelet from the same era found near Inverness. Its spiral may suggest a coiled snake too, but it tends towards a pure geometry of form, its grave weight a symbol and measure of status. 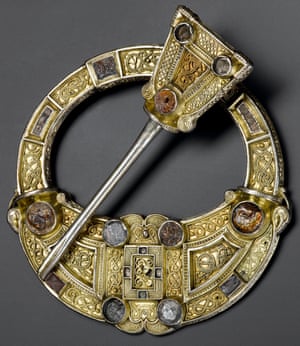 
What makes this show so exceptional is not just its prodigious range – 2,500 years of art – but its passionate curiosity. Every object, juxtaposition and wall text is presented to inspire new ideas. A sealed bronze canister in a glass case might be meaningless to modern eyes. But here you learn that it was found in a grave, suspended from the belt of a young woman. X-rays show nothing inside. Perhaps it contained a spirit, or had magical powers, or once rattled with dried seeds to make music. The curators’ suggestions are vivid, and yet they allow the object to retain its mystery.

Two enigmatic bronze spoons, shallow and flat, one drilled with a hole, were found carefully buried near a spring. Perhaps people dripped water through the hole from one spoon to the other; perhaps the pattern of droplets predicted the future. Who knows? To see them in this show, in all their strangeness, is to be immediately there by the Cumbrian spring, 2,000 years ago.

Celts is at the British Museum, London until 31 January 2016

http://www.britishmuseum.org/whats_on/exhibitions/celts.aspx
Posted by Frank Black at 08:12