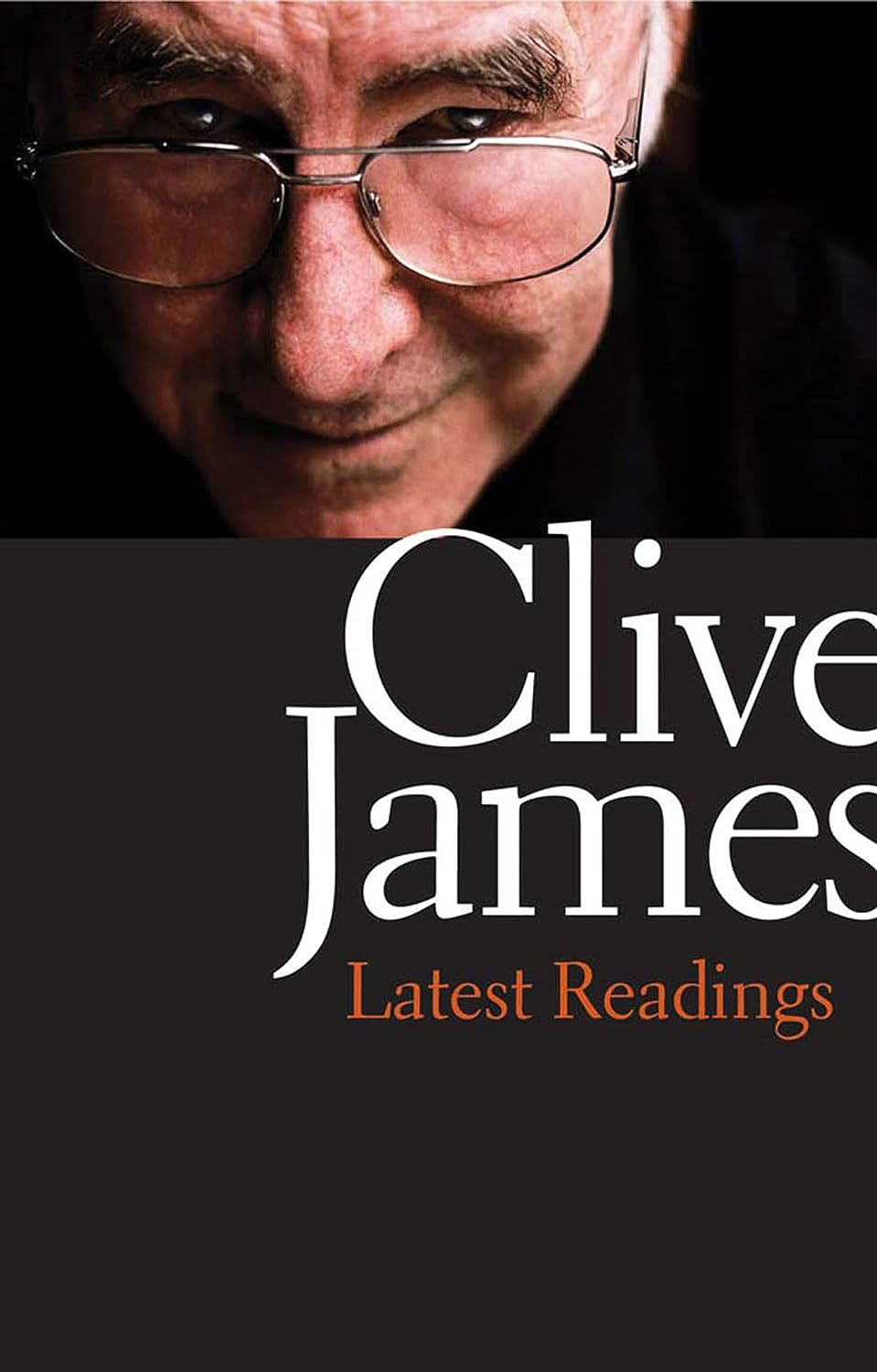 When Aussie polymath Clive James was diagnosed with terminal leukaemia in 2010, he could have been forgiven for bringing down the curtain on a long and glittering literary career. Instead, his unwanted contract with the Grim Reaper sparked a highly prolific second creative life. New volumes of verse, literary criticism, a translation of Dante's Divine Comedy and a poetry handbook have appeared with almost indecent haste since his diagnosis, forcing James to make a running joke of his undelivered demise. The shadow of mortality has spurred James on to continue lighting up the page, including this year's acclaimed death-haunted collection, Sentenced To Life. The newest instalment in this unexpected autumnal harvest is Latest Readings, a hymn to the pleasures, passions and obsessions of reading and collecting books. But just as importantly, James the bibliophile connects a love of reading with the larger issues of life itself, noting how 'Being book crazy is an aspect of love, and therefore scarcely rational at all.'

Latest Readings - a title surely punning on medical as well as literary concerns, especially as the book is dedicated 'To my doctors and nurses at Addenbrooke's Hospital, Cambridge, UK' - rarely reads like a valedictory book. Rather, it is a typically Jamesian collection, light on its feet, various and erudite, and packed with his trademark epigrammatic literary skills. A late love letter to favourite books and authors, old and recently discovered, it is also partly a homage to Hugh's bookstall in Cambridge, where the ailing James still trundles to replenish his already overstuffed shelves. But devotion to literature has been the guiding principle of a writer born in 1939 in Kogarah, suburban Sydney, later immortalising his early life in the bestselling Unreliable Memoirs (1980.) Arriving in England in the early 1960s, James initially endured the life of the penniless poet, before his intellectual life blossomed at Cambridge University, where he took a second degree and also developed a taste for performance as part of the Cambridge Footlights. The patronage of such inspired literary editors as Karl Miller and Ian Hamilton furthered the career of the ambitious Australian, James becoming part of the talented coterie of writers associated with Hamilton's The Review and the later and more lavish The New Review. Embracing high and low culture, James' early critical prose style was rambunctious, possessing an almost rock 'n' roll swagger. (Recalling an early 1960s reading by the urbane American poet Richard Wilbur, James wrote in The Review in 1971: 'Into the pocket of high pressure created by this performance strode Wilbur, the epitome of cool. It was all there: the Ivy League hair-cut, the candy-stripe jacket, the full burnished image of the Amherst phi beta. Riding his audience like the Silver Surfer, he took European Culture out of his pocket and laid it right on us. We were stoned.') Collecting his energetic early criticism in his first book, The Metropolitan Critic (1974), James was an unstuffy intellectual who seemed to know as much about Wittgenstein as Diana Ross and the Supremes, delighting in working in all available cultural registers, often irritating conventional academics into the bargain with his blatant disregard for aesthetic boundaries.

Clive James first made a big splash with the wider public when he was appointed TV critic for The Observer in 1972. During his decade-long tenure, James reinvented the art of TV criticism, attracting a huge weekly readership with his funny, sparkling descriptions of everyone from tennis star Bjorn Borg ('Borg runs a taut ship. He likes his headband tight too, to bring his eyes closer together') to Henry Kissinger ('All Kissinger could do was fall back on his old trick, or drick, of substituting, or subsdiduding, 'd' for 't.' His line on Vietnam was familiar. 'We inherided a dragedy.') Collected in two volumes, as Visions Before Midnight and The Crystal Bucket, James followed up his writing about TV to making it, becoming one of the most familiar talking heads on British television in the 1980s and 90s. Whether sending his idiosyncratic televisual 'Postcards' from exotic, far-flung locations of the world, cherry picking the weirdest Japanese game shows or interviewing everyone from the Spice Girls to Frank Sinatra, James' TV shows were distinguished by his trademark razor-sharp wit. But there were some who eventually questioned whether James was squandering his considerable literary talents on telly trivia and he eventually withdrew from the charms of the gogglebox. Returning to writing in earnest - which, in truth, he had never abandoned - James entered his mature second creative phase. This included launching his own dedicated website (clivejames.com) and resuming his songwriting relationship with Pete Atkin, for whom he had supplied lyrics since the late 1960s. Although never troubling the charts, the string of albums the duo produced in the 1970s represented one of the Australian's most serious creative endeavours. Spurred on by a website called Midnight Voices, supported by long-term fans, James and Atkin picked up the pieces of their words and music partnership in several late career albums, including 2015's The Colours of the Night, which, given the parlous state of James' health, represents what Atkin calls the 'natural end' of their long songwriting marriage.

Latest Readings is the result of Yale University Press asking James to 'compose a little book' about his recent reading. It is indeed a little book, but one packing a considerable critical punch, betraying few signs of its author's poor health. Illuminated by his epigrammatic gift, the brief chapters read like witty philosophical meditations on the books and writers which have meant the most to James, both old and new, ranging from Osbert Lancaster to Evelyn Waugh and from Patrick O'Brian to Olivia Manning. The favoured books are reconsidered through the prism of time and experience.

A central presence is Joseph Conrad, a touchstone for the ailing Australian for more than half a century: 'Time felt precious and I would have preferred to spend less of it with him, but he wouldn't let me go.' Revisiting Lord Jim for the first time since he was an English student at Sydney University, the older writer recognises the historical resonances he had missed in Conrad as an undergraduate, as he lies on his sweat-soaked hospital bed: 'An international historical picture is exactly what it exemplifies.' He reconsiders Hemingway, another lifelong favourite, the mature critic highlighting the imperfections in The Sun Also Rises. While recalling with fondness Hemingway's sharp narrative details - 'the chestnut trees of Paris, the running of the bulls in Pamplona' - such youthful admiration is tempered with an awareness of the American's stylistic shortcomings, including repetitious dialogue and characters merging into one. Overstatement was, James feels, a cardinal sin in Hemingway, as 'he habitually trod on the accelerator instead of the brake.'

Diverting off the literary path, James' study of movie books is evidence of his critical amplitude. He reveals he is 'always reading' My Indecision Is Final by Jake Eberts and Terry Ilott. A chastening analysis of Britain's failure to develop a Hollywood-style film industry, James feels the book underlines the necessity of balancing art and commercial nous, concluding that Britain has plenty of the former and not enough of the latter. For James, other kinds of lessons are contained in Steven Bach's Final Cut, about the making of director Michael Cimino's 'pretentious fiasco' Heaven's Gate. A hideously expensive western that ruined United Artists, James draws parallels between its delusional director and the self-inventions of Hemingway. Heaven's Gate was 'all lessons,' the most significant being the ability of critics to hail a formless movie a masterpiece. Similarly, books about World War 11 offer James more scope to brood on the lessons of history, much as he did in his ambitious, almost 900-page book of biographical portraits Cultural Amnesia (2007.) Never afraid to name-drop or shy about revealing his multi-lingual erudition, James is also given to pithy pen portraits of the great and good of history, speculating that although wartime Britain would not have survived without Churchill, 'the war would have been lost if he had been left to himself.' He even accuses Hitler of intellectual oneupmanship, questioning the Fuhrer's claim of carrying all five volumes of Schopenhauer's collected works in his knapsack during his time in the trenches. (Naturally, James has those same five weighty volumes on the bookshelves of his Cambridge home.)

In a touching coda, James momentarily dispenses with high literary concerns for the nitty gritty of serious illness. Recalling the night his catheter bag broke, flooding the hospital floor with 'amber piss,' James sings the praises of the nurse who came to his aid: 'I can only hope that the sum total of my writings has been as useful to the world as her kindness, but I doubt that this is so.' Left with one good eye after several cataract operations, James now reads his beloved books under the twin pressures of terminal illness and limited time. Composing the inscription for an imaginary plaque in his memory, James writes: 'He loved the written word, and told the young.' Latest Readings is a late-career gem from a writer continuing to rage against the dying of the light.

http://www.thelondonmagazine.org/tlm-current-issue/?issue=october-november-2015
Posted by Frank Black at 07:21