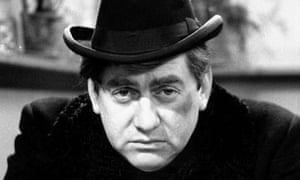 H-H-H-Happy H-H-H-Halloween!
from all the FNB, past, present and future...

The Stories of MR James

A large portion of my childhood was spent in the car, driving between my parents’ houses. To enliven these journeys, my father bought a sizeable collection of story tapes. As a consequence, my sister and I know Three Men in a Boat andThe Wind in the Willows almost by heart. But the one we listened to most often didn’t involve benign picnics by the Thames. The Stories of MR James, read by Michael Hordern, was about a different kind of England: misty, haunted, malevolent.

James was a medievalist and provost of King’s College, Cambridge. His stories are populated by dons and curates, people who potter into country churches and take tea in their rooms after games of golf. After acquiring an object – a bone whistle, perhaps, or a painting that has caught their fancy at a county auction – they become subject to disquieting phenomena: small, unpleasant disturbances in the fabric of reality.

To this day, I still find it hard to read “Casting the Runes”, in which Mr Edward Dunning, engaged in research at the British Museum, is cursed by Mr Karswell, a petulant occultist from Warwickshire. The haunting proceeds incrementally, delicately, deliciously, building towards a night of horror. The lights go out in Mr Dunning’s house. When he slips his hand under the pillow to check the time, he encounters not his own familiar watch, but “a mouth, with teeth, and with hair about it, and, he declares, not the mouth of a human being”.

It’s this tenebrous quality, this paralysing vagueness, that makes James’s stories so lingeringly disturbing. He understood that the half-glimpsed thing is far more frightening than anything encountered in full light. The writhing sheets in “Oh, Whistle, and I’ll Come to You, My Lad”; the moving figure that emerges from a print of a country house in “The Mezzotint”: these slippery, malevolent objects have the capacity to unnerve me still.

Listening to the tape while driving at dusk through Hampshire, Buckinghamshire, the marsh country of Essex, it was easy to feel that James had found a way to tap the strangeness of the English countryside, with its crumbling houses, its blighted ash trees and deserted beaches. Even now, in a different millennium, that odd, uncanny power still abides, both in the land and in the stories that came out of it.

Out of our many Halloween favourites, I think this year calls for the return of the Bonzos:

A moonlit clearing in a dark forest; a deserted house; a traveller who comes to knock at the door and calls out “Is there anybody there?” The setting is eerie enough, but slowly a deeper and more disturbing strangeness settles. A bird flies up out of the turret and the sills are fringed with leaves. It is a long time since this was a place of human habitation, and yet the house seems to hold its breath as the traveller strikes upon the door. The sound does not echo into emptiness. The air is “stirred and shaken” by the knocking and the cry of the man who seeks entry, but no one responds. There is “only a host of phantom listeners” there. They possess the house. They have never left it, even though green things tangle at the windows and birds build their nests in empty rooms. Like the house, they wait and listen and do not answer “that voice from the world of men”.

At around the 15th line, gooseflesh rises on my arms. It always happens: it makes no difference that I know what’s coming, or that I’ve read the poem dozens of times. The presence of the listeners is so palpable that figures begin to take shape in the imagination. They are there, and not there. They are summoned up, but they will not answer.

Throughout the poem it is the traveller who acts and speaks, but the listeners who lie at the heart of the mystery. There are no stanza breaks: it is all one poem, wrapping itself around the reader like an incantation. Read it on Halloween, and see what comes.

‘Is there anybody there?’ said the Traveller,
Knocking on the moonlit door;
And his horse in the silence champed the grasses
Of the forest’s ferny floor:
And a bird flew up out of the turret,
Above the Traveller’s head:
And he smote upon the door again a second time;
‘Is there anybody there?’ he said.
But no one descended to the Traveller;
No head from the leaf-fringed sill
Leaned over and looked into his grey eyes,
Where he stood perplexed and still.
But only a host of phantom listeners
That dwelt in the lone house then
Stood listening in the quiet of the moonlight
To that voice from the world of men:
Stood thronging the faint moonbeams on the dark stair,
That goes down to the empty hall,
Hearkening in an air stirred and shaken
By the lonely Traveller’s call.
And he felt in his heart their strangeness,
Their stillness answering his cry,
While his horse moved, cropping the dark turf,
’Neath the starred and leafy sky;
For he suddenly smote on the door, even
Louder, and lifted his head:—
‘Tell them I came, and no one answered,
That I kept my word,’ he said.
Never the least stir made the listeners,
Though every word he spake
Fell echoing through the shadowiness of the still house
From the one man left awake:
Ay, they heard his foot upon the stirrup,
And the sound of iron on stone,
And how the silence surged softly backward,
When the plunging hoofs were gone. 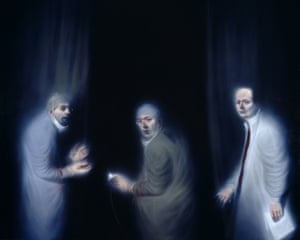 In traditional Scotland, Halloween or Samhain was the Celtic festival when this world and the otherworld were at their closest; the boundary between could be crossed. A sinister time. It was possible to foretell the future. The dead could walk.

It seems to me that Ken Currie’s eerie and brilliant portrait Three Oncologistsoccupies this very Celtic space. It’s an official portrait, commissioned in 2002 by the National Galleries of Scotland. The three men depicted (it would have to be three, like the weird sisters) are Professor RJ Steele, Professor Sir Alfred Cuschieri and Professor Sir David P Lane, all then of the department of surgery and molecular oncology at Ninewells Hospital, Dundee.

It’s a portrait, but far from flattering. Nowhere are the pomp and curly wigs of earlier portraits of surgeons and physicians. Currie’s painting reaches back into another cultural tradition. The three men are lit with a ghoulish inner light; they seem to be haunting the threshold between life and death. They are shown poised to move through a curtain, which is the black cloth of the theatre, the operating theatre, the veil between worlds. This curtain appears also to radiate from the figures, like an aura or ectoplasm. Like mediums, they can move back and forth into that place which is for most of us, an otherworld.

Furthermore, they hold their tools or means: Steele raises his gloved and bloodstained hands, Cuschieri holds a surgeon’s implement, Lane carries a paper. Whose sentence is written there?

Currie's three men are lit with a ghoulish inner light; they seem to be haunting the threshold between life and deathKathleen Jamie

Though it was painted in 2002, I believe the chill of this work lingers from the 19th century, when the medical colleges procured bodies to dissect without asking enough questions, when that demand was satisfied by body-snatching and even murder, as in those committed in Edinburgh by Burke and Hare. The surgery and science that saves us today is built on these misdeeds – Currie’s painting seems to acknowledge that horror. The medics themselves are pallid, corpse-like, but human, all look hunched, raddled, interrupted in their task. Are they slightly guilty? Is what they are doing transgressive? “Spooky” is not the word; there is a greater fear here, that of the unseen patient.

As we grow more able to say the word “cancer” out loud and more of us survive it, thanks in no small part to our surgeons and physicians, this painting will become a historical record of an emotional state, as well as honouring three esteemed medics. But it will still send a shiver down the spine. 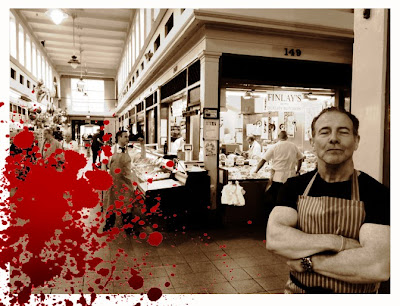 Jimmy Giblets: The Butcher of Old Newcastle
A macabre story from our own fair city:

The earliest thing that scared the bejesus out of me was intended to put Jesus into me. It was a Christian motivational film screened at my local church in Boronia, Australia, circa 1969. I must’ve been about nine and let me tell you, nine-year-old boys are not hot on allegory. In this movie, Jesus Christ was a clown. A Ronald McDonald-style clown, in a carnival. Clowns and carnivals are creepy as hell for a start, but the concept of this film (its title, unlike its imagery, did not get branded on my brain) was that the clown was compelled to take on the suffering of everyone else in the circus. So, in the act where the magician saws the lady in half, Pierrot Jesus takes her place, whereupon his mute paroxysms of pain indicate that he’s getting cut for real. In another scene, he’s in a barrel, contorted with agony as somebody thrusts a sword through slits in the wood. I’ve blanked out the rest, but I have an inkling that the climax involved a fatal fall from the trapeze. Jeez! The things we inflict on innocent children …

I’m not actually that easy to scare. Horror movies in which monsters pursue hyperventilating victims to rip out their entrails don’t faze me. I rate the special effects on a scale of 1 to 10, assigning 8½ to commendably exuberant eruptions of innards. But there’s one horror movie which has haunted me for more than four decades: Crowhaven Farm. I’m just one of a worldwide coterie of people who were enduringly spooked by this obscure made-for-TV flick when they chanced upon it in the early 1970s. Meeting a fellow Crowhaven Farm survivor is a deeply affirming experience. So it got you, too?

By modern standards, the film is tame. No eyeballs are punctured, no skulls explode. An unhappily married couple move to an isolated farm in Massachusetts. The plot unfolds in a succession of low-key, unsettling events. The neighbours are friendly and welcoming and (of course) have been waiting for this couple since the 1600s. By the time the wife is out in a field, pinioned under a large wooden plank while her Puritan neighbours pile rocks on top, the awareness dawns that you will never get over how creeped out you are at this moment.