Nicholas Parsons, who has died aged 96, entertained the public during eight decades as a versatile actor, straight man for top television comedians and, most famously, as a quizmaster, notably of BBC Radio 4’s Just a Minute, which he chaired enthusiastically and with scarcely a break for more than 50 years.

In the show, which requires contestants to speak for 60 seconds on a given topic “without hesitation, repetition or deviation”, the persona he chose to project, honed to perfection during a career that began in the 1940s, was that of a quibbling pedant from the professional classes who felt he had to treat his unruly panellists with lofty asperity. “My manner can best be described as laborious, rather pompous,” he admitted disarmingly.

In reality he was, of course, as keen to get laughs at all costs as his charges, even – perhaps especially – if that meant robbing him of his dignity. For many years the show had the same panellists – Derek Nimmo, Kenneth Williams, Clement Freud and Peter Jones. Later regulars included Gyles Brandreth, Pam Ayres, Stephen Fry, Julian Clary, Sue Perkins, Graham Norton and Paul Merton. Only Parsons remained a constant. His longevity became the subject of much banter in recent years; an exchange on the topic “Oliver Cromwell” gives a flavour.

Merton: “To be honest, he was doing the warm-up to Charles I’s execution.”

Norton: “He’s still got the bladder on a stick!”

What the panel could not rob him of, however, was his control and quick-wittedness. Having spent a lifetime in comedy, Parsons never failed to marvel at the show’s format. “The essence of comedy,” he told the Oldie in 2017, “is that you pause for effect, you repeat for emphasis, and you deviate to surprise. Yet these three things are exactly what you can’t do in Just a Minute. And it’s a comedy show, played for laughs.”

In many ways, the testily humorous chairman was just another character role for a performer who spent the first 20 years of his career mostly as a jobbing actor, often specialising in dialects. For the BBC Radio Drama Company in the 50s, in various productions he was an Italian waiter, a Greek seaman, an Egyptian camel-herder, a Scottish gillie, a Welsh miner, a Croatian freedom-fighter and a London taxi-driver, among many others.

Parsons was born in Grantham, Lincolnshire, the middle child of a doctor, Paul, and a former nurse, Nell (nee Maggs). He attended the kindergarten of Kesteven and Grantham school for girls, where Margaret Roberts, later Thatcher, was a pupil, and, after his father joined a medical practice in London, went to Colet Court prep school and then St Paul’s senior school.

School days were not particularly happy. He was dyslexic (then undiagnosed) and, while left-handed, was instructed by his mother to write with his right. “This can create a disturbance in the mind because one part of the brain controls your actions on the left, and another the right,” he wrote in a memoir in 2010. “If this is forcibly disrupted, it can result in difficulties in speech.”

In Parsons’s case it led to a life-long offstage stammer. Though highly intelligent, he struggled at school and compensated in two ways. He became a class clown to deflect from his hesitant progress in lessons, and because of his reading problem he developed a prodigious memory. All through his television career he never used an autocue because he could not read it. He simply remembered everything.

Although he wanted to be an actor from an early age, his parents were extremely unenthusiastic, his mother commenting: “Someone like you, Nicholas, will just end up as an alcoholic or some kind of pervert.” So when he left school he got a job as an engineering apprentice at a factory making marine pumps on Clydebank near Glasgow.

In the five years he was there he spent two six-month periods studying engineering at the University of Glasgow and also developed a variety act, impersonating film stars, which was successful and came to the attention of the impresario Carroll Levis, who used him on his radio show.

In 1944 Parsons applied to join the merchant navy but within a few days of being accepted was taken seriously ill with pleurisy and spent five months in hospital. At one point the family was told his chances of survival were 50-50. After his recovery he returned to work and qualified as a mechanical engineer, performing as an entertainer in the evenings, and when the second world war ended he became a full-time professional actor with the grudging support of his parents.

He made his West End stage debut in The Hasty Heart at the Aldwych in 1945, then played the lead in a tour of Arsenic and Old Lace. He was in rep in various towns for two years and also played supporting roles in many British films. He continued to perfect his comedy act for variety and cabaret, and in 1952 became resident comedian at the Windmill theatre.

Parsons was ubiquitous on radio and television in the 50s, and there was a breakthrough, in terms of public recognition, when he became straight man for the character comedian Arthur Haynes for 10 years in several ITV series written mostly by Johnny Speight.

Haynes usually played a wily and contemptuous tramp, and Parsons “Mr Nicholarse”, the authority figure dealing with him. The partnership broke up in 1966 and Parsons returned to the stage before working as foil for Benny Hill in more ITV shows from 1968 to 1971. He became a popular personality in his own right as quizmaster of Anglia Television’s Sale of the Century (1971-83) – “and now, from Norwich, it’s the quiz of the week”.

Parsons had been chairman of Just a Minute, devised by Ian Messiter, since the first broadcast in 1967. In 2017, as the show’s 50th anniversary approached, he concluded that: “It’s the fun that keeps it going.”

Parsons was appointed OBE in 2004 and CBE 10 years later. He served as rector at the University of St Andrews from 1988 to 1991, wrote two volumes of autobiography and performed his one-man show at the Edinburgh festival and around Britain for many years.

He is survived by his wife, Annie Reynolds, whom he married in 1995, and by two children, Suzy and Justin, from his first marriage, to the actor Denise Bryer, which ended in divorce.
Advertisement 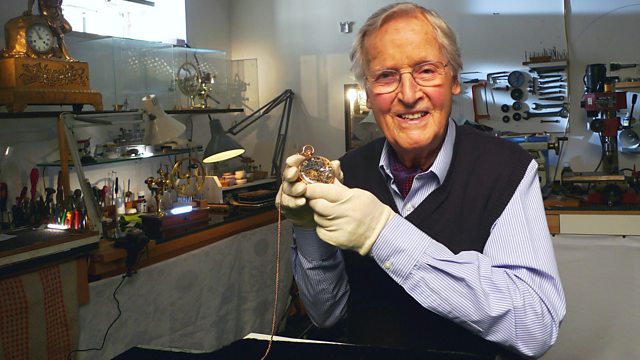 The Incredible Story of Marie Antoinette's Watch with Nicholas Parsons

Nicholas Parsons, Just a Minute host and stalwart of the entertainment world, explores his life-long enthusiasm for clocks when he goes in search of the most valuable and famous watch in the world.

The so-called Marie Antoinette, once the target of one of the biggest museum heists in history, was the masterpiece made by 18th-century genius Nicholas Breguet for that doomed queen.

Tracing the enthralling story of Breguet's rise to fame, Parsons visits Paris and Versailles, and the vaults of today's multimillion-pound Breguet business. Exploring the innovative and dazzling work of the master watchmaker, Parsons unravels the mystery behind the creation of his most precious and most brilliant work.

Parsons then heads to Israel to discover how, in the 1980s, the world's most expensive watch was stolen in a daring heist and went missing for over 20 years.

Revealing a little-known side of one of our favourite TV and radio hosts, the film offers a glimpse into Parsons's own private clock collection while also telling an enthralling tale of scientific invention, doomed decadence and daring robbery