Artemisia Gentileschi's Saint Catherine of Alexandria in The National Gallery 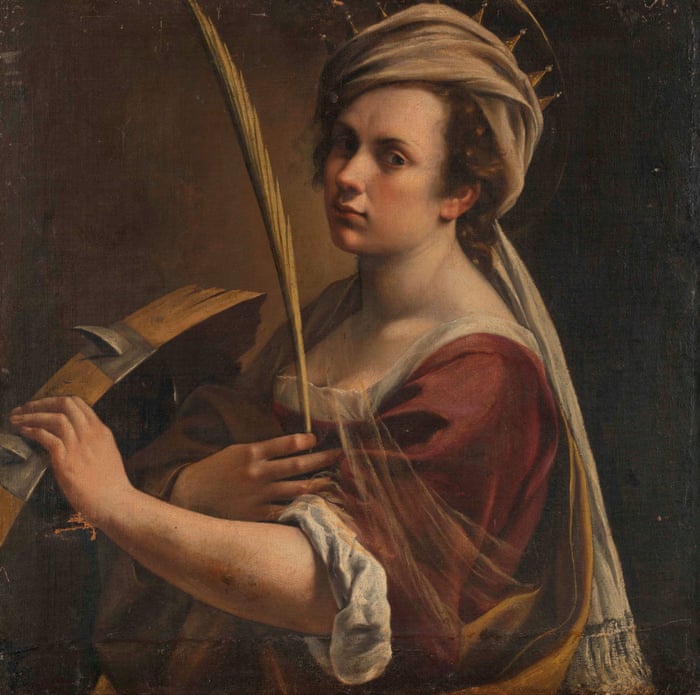 Self-Portrait as Saint Catherine of Alexandria

National Gallery buys Artemisia Gentileschi masterpiece for £3.6m
The 17th-century painter’s self-portrait, which alludes to her rape trial, is only the 20th work by a woman to enter a collection of more than 2,300 European paintings

They tried to break her on a wheel, but she survived. This is how the great female 17th-century painter Artemisia Gentileschi portrays herself in a sensational, newly uncovered masterpiece that has just been bought by the National Gallery for £3.6m – a record for her work.

Self-Portrait as Saint Catherine of Alexandria is a stunning collision of art and reality that sends a raw and intimate message straight from the 1600s to us. Her eyes look away, as if thinking of a painful memory, yet there is a calm in her monumental pose. She’s got the strong, muscular arms Artemisia always gave the women in her paintings and as she ponders the past, the fingers of her left hand rest on a shattered wooden wheel with vicious metal spikes embedded in its rim.

Just a few years before she painted this self-portrait, those fingers were deliberately crushed in a courtroom in Rome, when an 18-year-old Gentileschi was publicly subjected to a thumbscrew-like torture called the sibille. Cords were twisted round her fingers then pulled tight, supposedly to ensure her evidence at the trial of the man who raped her was honest.

When I saw the painting in the National Gallery’s skylit conservation workshop earlier this week, the atmosphere was intense. I was the first person from outside the gallery, since it acquired the work, to encounter the spellbinding record of her pain and courage. Just weeks ago, I had written in the Guardian about why the National Gallery urgently needs an example of this great artist’s work, so they had invited me to “come and see her”.

There’s something very special about seeing a great work of art on an easel, unframed, still with patches of surface dirt and the odd minor abrasion that will be carefully fixed before it goes on public view next year.

The painting was discovered in 2017. For centuries it had been owned by a French family, its authorship forgotten, but last December it was auctioned in Paris and bought by a London dealer. Letizia Treves, the National Gallery’s curator of baroque art, knew the museum had to have it.

This is a historic moment for the gallery. Only a tiny proportion of the art it displays is by female artists. Gentileschi’s painting has just become the 20th work by a woman to enter its collection of more than 2,300 European paintings created between the middle ages and the era of Cézanne.

As we contemplate Gentileschi’s gaze in the hidden studio, it is obvious I am not the only one who finds this an emotional moment. Treves points out the palm that Gentileschi is holding in her right hand, the symbol of her victory through martyrdom. But does this palm, wonders Treves, look like a paint brush? If so, it adds yet another autobiographical layer. They tried to break her on the wheel, but she survived to become a painter.

Larry Keith, the National Gallery’s head of conservation, who is going to restore the painting over the next six to nine months before it goes on show in 2019, points to a small patch he has already cleaned. There’s a lot of deep, subtle shadow there, he explains, that will give the painting a powerful “sculptural” quality once the remains of bad restorations and varnishes are removed.

Gentileschi was born in Rome in 1593, the daughter of the painter Orazio Gentileschi. Having an artist for a father was about the only way women could get access to the training expected of artists in Renaissance and baroque Europe. Artemisia grew up in the heart of a thrilling and radical artistic subculture. Her father was a close friend of the hard-living, hard-painting Caravaggio, whose sensual, stark art blew apart convention at the end of the 1500s. As a child, Artemisia must have met Caravaggio many times. Her paintings – including this one – make plain her devotion to his art. 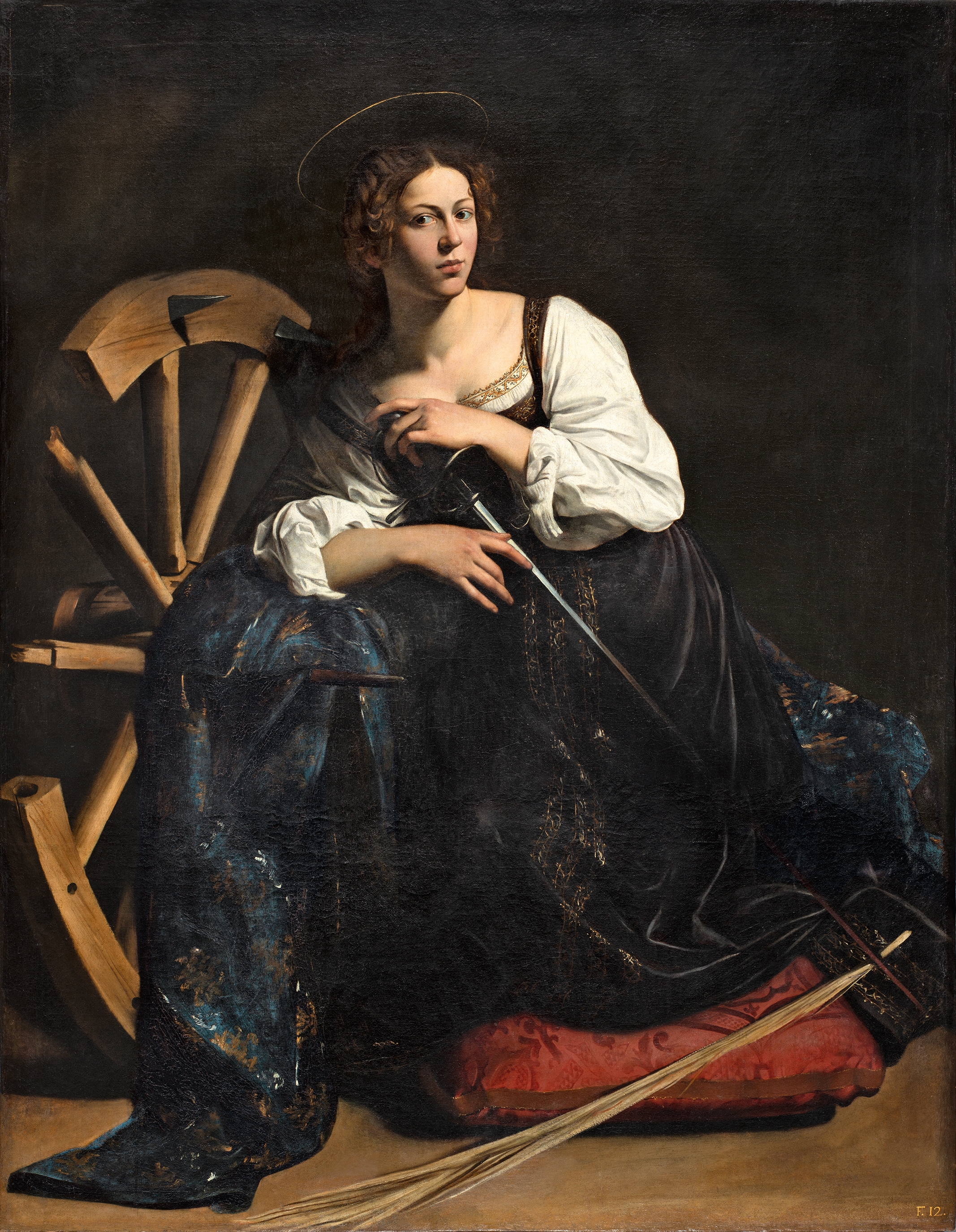 Treves looks forward to seeing this painting hanging next to Caravaggio’s masterpieces in a few months time. It shares his raw passion for life. I see it as a dialogue with his Saint Catherine in Madrid’s Thyssen Collection. In both, there is a still, contemplative mood. Yet when you look at the sword Caravaggio’s model holds, or the spikes next to Gentileschi’s fingers, the threat of violence hangs there like a bad memory.

Gentileschi’s access to training as a painter came at a terrible price. Agostino Tassi, the painter friend her father hired as an art teacher, made ever-more menacing advances that culminated in rape. As the father of a “dishonoured” 18- year-old daughter, Orazio brought charges.

The resulting trial was a cause célèbre as witness after witness attested to Tassi’s bad character – it seemed he had previously murdered his wife. The facts of his attack on Gentileschi were clearly established, not least by her own eloquent account, where she told how she nearly stabbed him to death. Yet Tassi walked away because the Pope, for whom he was painting frescoes, protected him. It was Gentileschi’s name that was tarnished.

Gentileschi poses with the wheel, adopting the iconography of Catherine of Alexandria that had been long established by artists like Raphael (whose version is also in the National Gallery). The wheel is a symbol of suffering overcome, a reminder of violence endured. 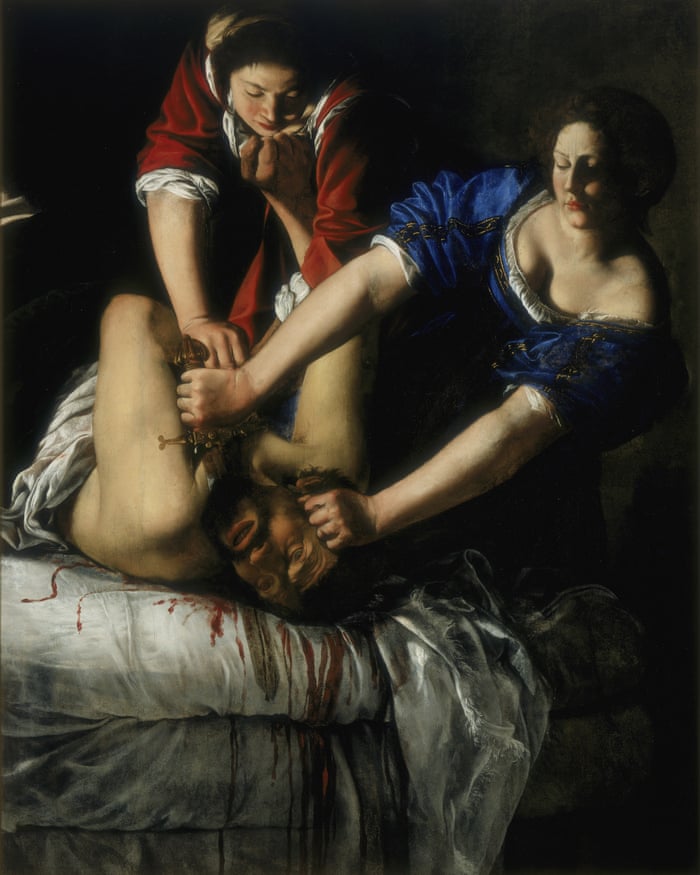 For us it looks like a direct allusion to her ordeal of rape, torture and humiliation. It would have had that meaning for its first audience, too. The 1612 trial made Gentileschi notorious. She painted this testimony in Florence, where she rebuilt her life and career under the patronage of the Grand Duke of Tuscany. Her gory painting Judith Slaying Holofernes, which can still be seen in Florence’s Uffizi Gallery, seems to fantasise revenge in its gruesome vision of a bearded man who has just woken to find one muscular woman pinioning him on his blood-spattered bed while another is halfway through hacking his head off.

No one in Gentileschi’s circles in around 1616 could be unaware of her widely publicised story. Self-Portrait as Saint Catherine is perhaps her most explicitly autobiographical work. Her famous Self-Portrait as the Allegory of Painting, in the Royal Collection, depicts her from the side as she energetically goes to work. In the former she looks out, and we are drawn deep into her sensitive face. 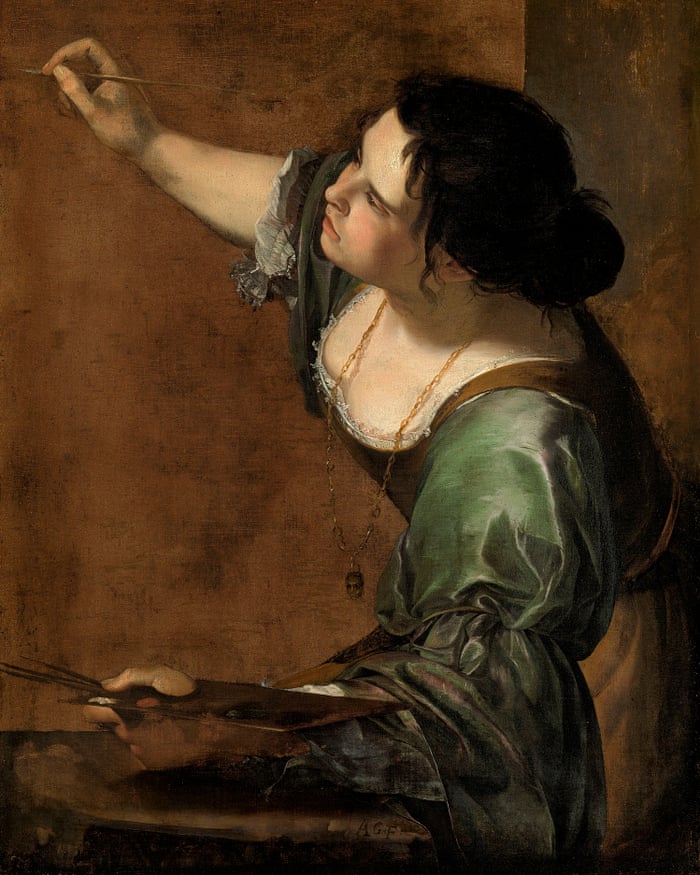 Self-Portrait as the Allegory of Painting

Artemisia is worth 10 average Old Masters. The combination of her brutalised early life and Caravaggio’s lesson that art and life are the same thing drove her to paint from a previously obscured female perspective. When she painted Judith killing Holofernes or the creepy elders spying on Susanna, she brought a personal point of view to these biblical themes. In her hands, they become studies of gender and power. She put her experience of the violent and unquestioned misogyny of her age, which meant that an 18-year-old aspiring artist was considered fodder for a sexual predator, into art that was honoured and admired by fans from the Medici to England’s Charles I.

In Self-Portrait as Saint Catherine of Alexandria she has truly survived. She stands by the broken wheel and defies its spikes. She proclaims her triumphant entry into a male-only profession.

Four hundred years on, that triumph is finally complete. Her vision will blaze in the National Gallery next to works by her father Orazio and her creative godfather Caravaggio. This gallery may still have pitifully few paintings by women but it matters hugely that one of them is by this truly great artist. This is one of the most important purchases the National Gallery has ever made.