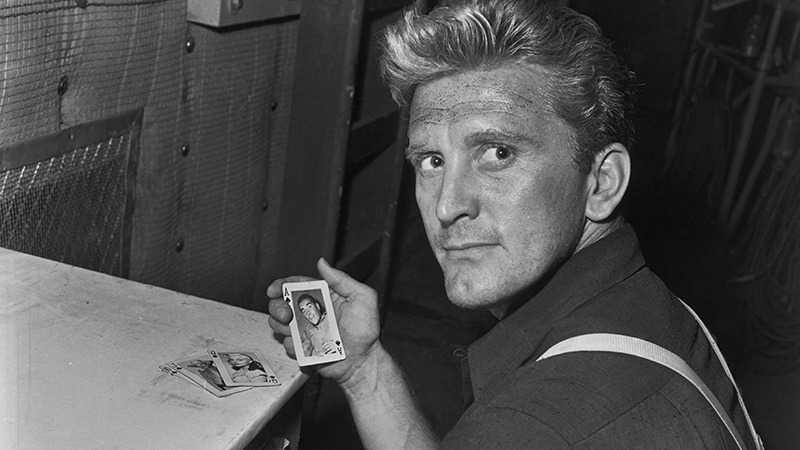 I am Kirk Douglas! The lust for life of a screen legend at 100

Hero, villain, painter, warrior, boxer, soldier, rebel. As he celebrates his centenary year, Hollywood veteran Kirk Douglas can look back on a career that has spanned decades and expressed itself in a spectrum of characters and genres so broad that it is hard to think of another actor who could hope to match it. With his chiseled looks and distinctive delivery, Douglas built his reputation as a masculine action man, however his subtlety and nuance allowed him to transcend these tough guy roles to take on far richer subjects. With the BFI running an extensive retrospective of Douglas's films, BRIAN MORTON reflects on the life and legacy a true legend of the silver screen.

Drama students used to be taught that the so-called Bad Quartos were probably pirated editions of Shakespeare dictated by disgruntled minor actors who had got their own parts down pat but could only make a hash of the great speeches. Kirk Douglas was never like that, in the sense of never seriously disgruntled, never other than word-perfect right across the script, and never, ever minor.

It’s a playful coincidence that the 400th anniversary of the death of our greatest playwright should also mark the coming centenary of our greatest living screen presence, who despite cheating death in a plane crash, surviving a devastating stroke and suffering multiple onscreen mutilations – an eye in The Vikings, an ear in the Van Gogh biopic Lust For Life, crucifixion in Spartacus – celebrates his 100th birthday in early December.

Douglas was a perfectionist on set, and seldom out of character off it when he was in production.

Not only did he master his own parts, with their shifting motivations, ambiguities and contradictions, he insisted on knowing everyone else’s, frequently going head-to-head with such notorious micro-managers as Stanleys Kubrick and Kramer.

The Scottish actor and former intelligence officer James Donald played Theo Van Gogh to Douglas’s Vincent and co-starred as Egbert in The Vikings.

Donald told my father that Douglas was the most exacting and sometimes exhausting man he’d ever seen before or behind a camera. And yet Douglas always preferred the former.

Even allowing for a heyday when directors and players were as rigidly stratified as officers and men in a POW camp (Donald is best known as the senior Brit in The Great Escape) Douglas’s sheer personal authority and knowledge of the business would surely have allowed him to make pictures of his own should the desire have arisen.

That it did not leaves us with an unanswerable question about how this most commanding but also adaptable of actors – qualities inherited by his much-underrated son Michael – would have framed a drama.

On the surface, Douglas himself seems all about action, his sheer physicality matched by a voice that grinds like a tank track. And yet what is remarkable about his body of work, taken entire, is how delicate and nuanced much of it is.

He said once that being an immigrant in America was to be born an actor; adopting roles was a survival strategy

The relationship between Douglas and the relentlessly one-dimensional Anthony Quinn as Gauguin (or rather Zorba the Painter) in Lust For Life has a curiously feminine quality, which nowadays would have been seized on and foregrounded as bromance and gay subtext but which remains just a shimmer over Vincente Minnelli’s scenario.

Where does this come from? Norman Mailer, another bruiser who in real life exuded a rough courtliness, said that he had spent his early adult years trying to escape from the nice Jewish boy from Brooklyn that he had been.

Douglas grew up even further out of town, in Amsterdam, mid-New York State. He started out as Issur Danielovich, later Izzy Demsky, and only became Kirk Douglas, not for Hollywood but in order to avoid anti-semitism in the US Navy.

Where Fanny Mailer was the major influence on the future writer, so the tough, Yiddish-speaking Bryna Danielovich (and six sisters) were the primary shaping force in Douglas’s life.

Even when he treats woman badly on screen, one senses that he at least understands them, individually and collectively, and that somehow makes his roughness better, and subtly worse. When he formed a production company, Douglas didn’t name it Longship or Gladiator, but Bryna, after his mother.

He studied at the American Academy of Dramatic Arts in New York but showed no particular desire to be Hamlet or Anthony, not when there were, as he put it, American stories to tell, and not when a camera allowed him to inflect even the most macho speech with glimmers of subtlety and humour.

He said once that being an immigrant in America was to be born an actor; adopting roles was a survival strategy.

He called his first venture into autobiography The Ragman’s Son, which was both literally true – Herschel Danielovich took a cart round the streets, calling for cast-offs – but also symbolically appropriate, because Douglas picked up voices, gestures, confrontations, flirtations at the same time.

He broke through as an actor with his screen debut, opposite Barbara Stanwyck. It happened in 1946, making this year another kind of Douglas anniversary, 70 years in the film business.

Movie reference books like to dismiss The Strange Loves of Martha Ivers as an exception, even an aberration, in the Douglas canon, given that he plays a weak and pliant man whose life is governed by a demanding older woman.

On the surface, that’s true, but that early performance remains a key text and perhaps tells a deep psychological truth about one of Hollywood’s most enduring tough men: that everyone has, and possibly fears as well as loves, a mother.

“She taught me how to be a man”, he said, but wouldn’t elaborate. He’d already said enough and Kirk Douglas has never been known to waste a word.

The BFI's Kirk Douglas retrospective runs from 3 September to 4 October 2016.

http://www.bbc.co.uk/programmes/articles/5xSk9HwMN0g1cn0Xy63hVXY/i-am-kirk-douglas-the-lust-for-life-of-a-screen-legend-at-100
Posted by Frank Black at 09:54