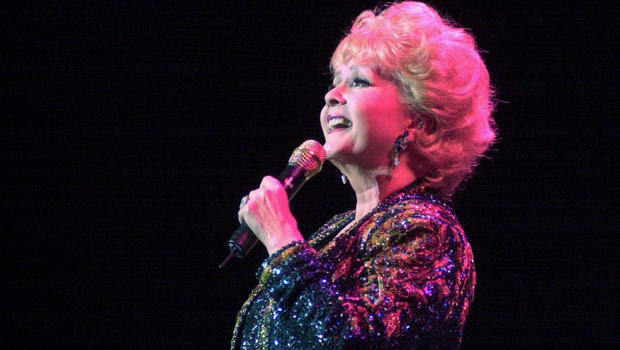 Debbie Reynolds obituary
The Singin’ in the Rain actor, who rose to fame with her youthful exuberance in 1950s musicals, had a prolific and ambitious career and resilience to match

When Debbie Reynolds, wearing a skimpy pink flapper’s dress, burst out of an enormous cake at a Hollywood party in Singin’ in the Rain (1952), she simultaneously burst into screen stardom.

In fact, it was the sixth film appearance of Reynolds, who has died aged 84, but her first starring role. The casting of the inexperienced 19-year-old was a risk taken by Gene Kelly and Stanley Donen, the co-directors of the classic MGM musical about the early days of talkies. The gamble paid off, but not without some sweat and strain.

“There were times when Debbie was more interested in playing the French horn somewhere in the San Fernando Valley or attending a Girl Scout meeting,” Kelly recalled. “She didn’t realise she was a movie star all of a sudden.” Reynolds herself admitted later: “I was so confused. It seemed dumb to me ... reporting to the studio at 6am, six days a week and shooting till midnight. I didn’t know anything about show business.

“I learned a lot from Gene,” she added. “He is a perfectionist and a disciplinarian – the most exacting director I’ve ever worked for … Every so often, he would yell at me and make me cry. But it took a lot of patience for him to work with someone who had never danced before. It’s amazing that I could keep up with him and Donald O’Connor. This little girl from Burbank sure had a lot of spirit.”

She was born Mary Frances Reynolds in El Paso, Texas. Her father was a railroad mechanic and carpenter, who lost his job at the height of the Great Depression. After living from hand to mouth for a while, the family moved to Burbank, California when her father got a job with the Southern Pacific railroad. While at high school, Reynolds entered and won the Miss Burbank beauty contest. One of the requirements was “talent”, which she fulfilled by lip-syncing to a record of Betty Hutton singing I’m a Square in the Social Circle, which earned the 16-year-old a Warner Bros contract. (It was Jack Warner who gave her the name of Debbie.) But after a bit part in the Bette Davis comedy June Bride (1948), and playing June Haver’s bubbly young sister in The Daughter of Rosie O’Grady (1950), she took up a contract with MGM where she flourished, on and off, throughout the 50s and early 60s.

Prior to Singin’ in the Rain, Reynolds was noticed, in what amounted to a cameo, lip-syncing I Wanna Be Loved By You to singer Helen Kane’s voice in Three Little Words (1950). In Two Weeks with Love (1950), as a younger sister again, this time Jane Powell’s, the cute 5 ft 2in Reynolds stopped the show with 6ft 3in Carleton Carpenter in two numbers: Abba Dabba Honeymoon and Row, Row, Row, with her nifty tap dancing belying her statements of never having danced before Singin’ in the Rain.


Reynolds’s lively opening Charleston number in the latter film has her singing and dancing All I Do Is Dream of You with a dozen other chorus girls; she keeps up brilliantly with Kelly and O’Connor in the cheery matinal greeting Good Mornin’, danced and sung around a living room – even though during some of the more challenging steps, she stands by and lets the two men dance around her – and she is touching in the lyrical duet You Were Meant For Me with Kelly, who switches on coloured lights and a gentle wind machine on a sound stage to create a make-believe atmosphere.

In the plot, silent screen star Lina Lamont (Jean Hagen, unforgettable) has a risibly squeaky voice for sound movies and, unknown to the public, is dubbed by Kathy Selden (Reynolds). In reality, however, Debbie’s singing voice was dubbed by the uncredited Betty Royce, and Jean Hagen herself provided the speaking voice for Debbie dubbing her on screen because Reynolds was then handicapped by what Donen called “that terrible western noise”.*

An effervescent Reynolds went on to star in a series of charming youthful musicals, this time using her own pleasant singing voice. I Love Melvin (1953) was one of the best, with Reynolds paired again with Donald O’Connor. The film opens with A Lady Loves, a musical dream sequence in which Debbie sees herself as a big movie star courted by Robert Taylor. This gives her a chance to be classy, in a tongue-in-cheek manner. Later she features in a witty acrobatic number entitled Saturday Afternoon Before the Game in which she is dressed as a ball being tossed around by a football team.

There followed The Affairs of Dobie Gillis, Give a Girl a Break (both 1953), Susan Slept Here, Athena (both 1954), Hit the Deck and The Tender Trap (both 1955). In the latter, a romantic comedy, Frank Sinatra is a confirmed bachelor and Reynolds is determined to trap him into marriage. In the same year, 23-year-old Reynolds married 27-year-old crooner Eddie Fisher. They became the darlings of the fan magazines, and co-starred in Bundle of Joy (1956), a feeble musical remake of the 1939 Ginger Rogers-David Niven comedy, which capitalised on their personalities as a happy young couple and the rumours of her pregnancy. (Reynolds gave birth to Carrie Fisher in October 1956.)

Meanwhile with the film musical in a moribund state, Reynolds showed that she could get by in straight acting roles, the first proof being in The Catered Affair (1956), a slice of Hollywood realism, with Reynolds as the daughter of working-class parents Bette Davis and Ernest Borgnine. This failed at the box office unlike Tammy and the Bachelor (1957), which was one of Reynolds’s greatest successes, the theme song of which (“I hear the cottonwoods whisp’rin’ above, Tammy! Tammy! Tammy’s in love!”) remained high in the hit parade for months. This entertaining piece of whimsy provided Reynolds as a backwoods girl in love with a wealthy man (Leslie Nielsen) with what was an archetypal role – a naive girl thrust into a sophisticated world … and triumphing.

In 1957, Eddie and Debbie were best man and matron of honour at the wedding in Acapulco of Fisher’s lifelong friend, impresario Mike Todd to Elizabeth Taylor. A little over a year later, Todd was killed in a plane crash, and Taylor sought solace in Fisher’s arms, causing a huge Hollywood scandal. Taylor who had been cast as the Grieving Widow, now found herself in the role of the Vamp, while Reynolds was widely and sympathetically portrayed as the Wronged Woman. However, the outraged moralistic public was unaware that the Fisher-Reynolds marriage was already in tatters although they continued to play America’s sweethearts in public, mainly because Debbie was pregnant with their son Todd (named after Mike) and they were worried that divorce would damage their popularity ratings. But divorce was inevitable and, on 12 May, 1959, Taylor, who had converted to Judaism when she married Todd, married Fisher at a synagogue in Las Vegas.

Despite being the divorced mother of two small children, Reynolds was never more active. In 1959, she was among the top 10 Hollywood box-office stars and appeared four movies that year: The Mating Game, Say One For Me, The Gazebo and It Started with a Kiss. None were world-beaters, but they got by on her effortless charm.

In November 1960, Reynolds married millionaire shoe-store magnate Harry Karl, and pursued her career with added vigour, though her roles hardly varied, whether she was playing Fred Astaire’s nubile daughter in The Pleasure of His Company or a feisty young widow with two children in The Second Time Around (both 1961) or a pioneer woman in the sprawling Cinerama Western How the West Was Won (1962), in which she is the only character who makes it through from the first reel to the last, ageing from 16 to 90.

In The Unsinkable Molly Brown (1964), for which she was Oscar-nominated. Reynolds throws herself around energetically in the title role of the backwoods girl (shades of Tammy, but with added robustness) who enters high society and survives the Titanic, displaying everything she had learned from past musicals, especially in the dance numbers Belly Up to the Bar, Boys and I Ain’t Down Yet.

After playing a man resurrected as a woman in the tiresome Goodbye Charlie (1964), the title role in The Singing Nun (1966), the mawkish biopic of the guitar-strumming Belgian nun who composed the hit song Dominique, she finally managed to bid farewell to her ingenue “tomboy” persona and portray a mature adult in Divorce American Style (1967). A rare Hollywood comedy with teeth, it cast Reynolds and Dick Van Dyke against type as a squabbling couple, who utter not a word as they prepare for bed in the best sequence. “That was a really hard part to get,” Reynolds commented. “The producer didn’t want me. He didn’t think I could play an ordinary married woman. I think he thought I had to be all ‘diva’d up’ and in a musical.”

When, Reynolds, now pushing 35, saw her film career gradually slowing to a virtual halt, she reinvented herself as a cabaret performer, appearing most frequently on stage in Las Vegas. Reynolds also shifted her attention to US television starting with 18 episodes of The Debbie Reynolds Show (1969-1970), a sitcom resembling I Love Lucy, in which she played a suburban housewife with ambitions to become a newspaper reporter. She continued to appear regularly on TV for the next four decades. What’s The Matter with Helen? (1971), a campy murder tale set in 1930s Hollywood in which Reynolds and Shelley Winters run a school for budding Shirley Temples, would be her last feature film for 20 years.

By the early 1970s, her marriage to Harry Karl was heading for the rocks, mainly because of his infidelities but also because he had gambled away both their fortunes. Luckily, Reynolds was still bankable and, immediately after her divorce in 1973, she made her Broadway debut in a revival of the 1919 musical hit Irene. The show, which ran for 18 months, gained Reynolds a Tony nomination, and was the first of several stage musicals she would appear in over the years: Annie Get Your Gun, The Unsinkable Molly Brown and Woman of the Year among them.

Reynolds returned to the big screen in the 90s, where she showed that she had lost none of her comic timing playing a number of sweet-voiced monster mums, having eerily maintained her kewpie-doll looks. These included Albert Brooks’s Mother (1996), her first leading film role for 27 years, In & Out (1997) and Zack and Reba (1998), as well as appearing in 10 episodes of Will and Grace on TV, portraying Grace’s mother, a would-be star whose propensity for breaking out into show tunes and impressions dismays her daughter. Reynolds was also known as Princess Leia’s mother, after Carrie Fisher found fame in the Star Wars movies.

Aside from performing, Reynolds had many other interests. In 1991, she bought a hotel and casino in Las Vegas, where she displayed part of her extensive collection of vintage Hollywood props, sets and costumes. But after her third marriage to real-estate developer Richard Hamlett ended, she was forced to declare bankruptcy in 1997. She later reopened her museum in Hollywood. Reynolds was also an indefatigable fund-raiser for The Thalians (a charitable organisation that provides mental health services from pediatrics to geriatrics in Los Angeles). She is survived by her son, Todd Fisher.

* No. Betty Noyes supplied Reynolds' singing voice and Jean Hagen only provided Reynolds' voice when she was supposed to be dubbing Lina Lamont...
Posted by Frank Black at 10:00

Labels: Fuck the fella in the brite nitegown...