Eric Rohmer: everyday miracles of a New Wave master
Meeting for drinks. Going to the beach. Family dinners. Eric Rohmer was a visionary who dealt in the down-to-earth, argues Michael Newton, as the BFI prepares to celebrate the French director

It's Christmas Eve, and a warm, beautiful woman asks a man to join her in bed. They met for the first time that evening. While they have been talking in her room, the snow has fallen. In another room, her young daughter sleeps. Only days ago, the man has decided that he will marry a young woman he has seen at mass, a complete stranger to him. He won’t weaken now, won’t complicate things. But there they are snowed in together; he cannot get home. He says “No”, and attempts to sleep in the armchair across from her bed. Realising his silliness, he compromises; he pads across the space between them, and lies down beside her, chastely on the outside of her white fur blanket. At the turning of the year, at the height of the 1960s, and Performance and Bob & Carol & Ted & Alice, in France, this is how they spend the night.

“Idiot,” the woman murmurs, drowsily. And we both completely agree with her, and yet cannot help but admire the man’s clumsy, life-denying rigour; but most of all we’re lost in that moment, in that room, with those lives, in that midwinter stillness of snow.

About 25 years ago when I first saw this scene in Eric Rohmer’s My Night with Maud (Ma Nuit Chez Maud) (1969), I knew that I had found (along with Hitchcock, Lubitsch and Michael Powell) the film-maker for me. Not everyone shares this enthusiasm. In Arthur Penn’s Night Moves (1975), Susan Clark invites her private-eye husband Gene Hackman to watch a Rohmer film with her.

“I don’t think so,” Hackman drawls. “I saw a Rohmer film once; it was kind of like watching paint dry.” It may not be the most fresh-minted putdown, but for many it was a sentiment to which their bosoms returned an echo. Most people know that Rohmer is very French, very chilly, very flat and very static. However, what most people know is entirely wrong. He explores situations of universal interest with warmth, an openness to visual beauty and, at times, a feel for suspense that shows his debt to Hitchcock. The accusation that he’s “literary” and that his films are “talky” is truer – but to me, the passion, the observational intelligence, the humour of those conversations is bliss. Rohmer comprehends the beauty of the almost.

Eric Rohmer was actually named Maurice Schérer; he took his pseudonymous first name from the silent movie director Stroheim and his surname from the creator of Fu-Manchu. After working as a teacher and in a university, Rohmer’s passion for film led, around the beginning of the 1950s, to a stint as a film critic, working at the magazine Cahiers du Cinéma alongside his cinéphile friends – Claude Chabrol, Jacques Rivette, Jean-Luc Godard and François Truffaut. For all of them, the real aim was to make movies. Together they transformed film criticism, and, from around 1959, as the directors of the French New Wave rejuvenated French – and indeed world – cinema. Over the next 50 years, Rohmer produced around 26 feature films, many of them part of three series: the Six Moral Tales; in the 1980s, six Comedies and Proverbs; and through the 1990s, Tales of the Four Seasons. His last film appeared in 2007; he was then 87 years old.

His first great success was those Six Moral Tales, which possibly remain his best work. There’s a tendency in British life to confuse “moral” with “moralistic”. Rohmer’s later use of the word “proverbs”, too, might carry a bad odour, suggesting words of wisdom that merely settle everything. But watching Rohmer’s films is never like that. The light is clear, but we’re still bewildered, amazed; they refuse neatness, solutions elude us, and we slip past the definitive things. What is perhaps really meant by “moral” in these six wonderful films is that they explore how their characters engage with life, respond to experiences, relate to others, love, desire and believe. The fault of the sometimes maddeningly irritating central male figures is that they do so according to a scheme.

Rohmer asserted: “Truth isn’t found in assertions.” In The Collector (La Collectionneuse) (1967), having been apparently derailed by events the hero pronounces: “I come back to my theory.” In that line is the key to all the moral tales, to many other of Rohmer’s films, and (this British writer suspects) to much of French culture. In these films, everyone has their theory of love, and if they believe that one cannot have a theory of love, well, then that’s their theory. According to their theories, all the various heroes have decided on the woman they want; they then immediately face distraction from another woman they might, if they let themselves, want more. They are forced to face the chasm in their own policy; these are films that often end with a man fleeing.

For all its vein of dandiacal puritanism, with its crop-topped heroine and its mop-topped young men, Rohmer’s first success La Collectionneuse looks hip, even groovy, and might have misled audiences into believing that Rohmer would be a modish film-maker. Sixties scenester Zouzou as Chloé in Love in the Afternoon (L’Amour l’après-midi) (1972) cannot help but look anything but stylish. But after that movie, his characters never look ahead of fashion again; one nagging, though minor weakness of the Comedies and Proverbs films is how they force us to revisit the horrors of 80s fashion.

The best of the series are probably The Aviator’s Wife (La Femme de l’aviateur) (1981) and The Green Ray (Le Rayon Vert) (1986). The first is a film in the vein of Hitchcock (and Rohmer even makes a Hitchcock-style cameo appearance in it). Its premise is that as films require plot, so people similarly need a purpose, something on their mind, an end that they really want to achieve. As one character says, “Personally, I like life when it’s most like a novel.” Graced with such purpose, the middle of the film proceeds like an off-beat detective thriller, a sweet centre of flirtation and intention, but it is bracketed by dissonance, dispute and aimlessness. Described like that, it may sound like an essay, but it’s a delight, Rohmer’s cousin to Woody Allen’s Manhattan Murder Mystery.

The fun in The Aviator’s Wife is a quality not often associated with Rohmer. In her elegy for Robert Lowell, Elizabeth Bishop wrote, “‘Fun’ – it always seemed to leave you at a loss.’ Rohmer’s films are full of people similarly left at such a loss. For them, a holiday is an existential crisis. This can be seen most clearly in The Green Ray, in the case of lonely singleton Delphine (played brilliantly by Marie Rivière), a woman desperate to find someone with whom she can go on holiday. While it is tempting to say The Green Ray is Bridget Jones’s Diary without the jokes (or the calories), actually Rohmer’s movie is, on occasion, horribly funny. (In the course of events Delphine encounters an assortment of the least attractive men ever to be immortalised on film – Rohmer was as interested in pick-ups as Andy Warhol.) The film moves seamlessly between documentary-like scenes (a cab driver discusses his lifetime of holidays), aching comedy, and moments of a strangely yearning symbolism.

People persist in asking Delphine, “Why are you crying?” She spends much of the film running from people. She’s a difficult person, perhaps – one of dozens in Rohmer’s films. They are all engaged in defining themselves, but are also constantly being defined by others. They know, or seek to know, how they love, who they love. Delphine is less articulate than Rohmer’s other central characters. She cannot express what makes her different, but nor can she help being so. It’s not easy being green. (We even see her having one of those self-justifying conversations that vegetarians regularly had to endure at dinner parties in the 1980s.)

What’s most interesting about The Green Ray is that an easily-missed tendency in all his contemporary films suddenly becomes manifest. Early in his career, Rohmer had said, “Everything is a miracle”. Like A Winter’s Tale (Conte d’Hiver) (1992) after it, The Green Ray offers the viewer marvels that stretch our ability to credit them. His films – and particularly these two films – affirm coincidence, just as Rohmer himself liked to leave room for happy accident in the making of his films. They allow a space for correspondences, for a magic of the everyday; they are seeing things.

What’s so striking is that this visionary sense occurs in the most down-to-earth, mundane environment. With the exception of his fine historical films, Rohmer’s movies are rooted in the lives we all live, which most films ignore: sitting on buses, waiting for trains, meeting friends for drinks, family dinners, going to work. He’s the Balzac of cinema, constructing a large, human comedy based on rootedness in a social realm and designed to explore experiences and conflicts that are as old as the human race itself. Balzac wrote novels, where Rohmer fabricated tales – small fables of life, limited but suggestive of farther visions.

The Romance of Astrea and Celadon (2007)

After making films exploring the France of his lifetime, as well as works set in Romantic Germany, revolutionary Paris and Arthurian legend, Rohmer closed his career with a work set in Arcadia. If there was ever a “late work” in cinema, akin to Verdi’s Falstaff or Shakespeare’s last plays, then it’s Rohmer’s The Romance of Astrea and Celadon (Les Amours d’Astrée et de Céladon) (2007). Based on Honoré d’Urfé’s early 17th-century pastoral romance, it should be absurd. The style falls between an Oxbridge fresher’s production of Milton’s Comus, a New Age nativity play and an eisteddfod. It is also an extraordinary film, high among Rohmer’s achievements. 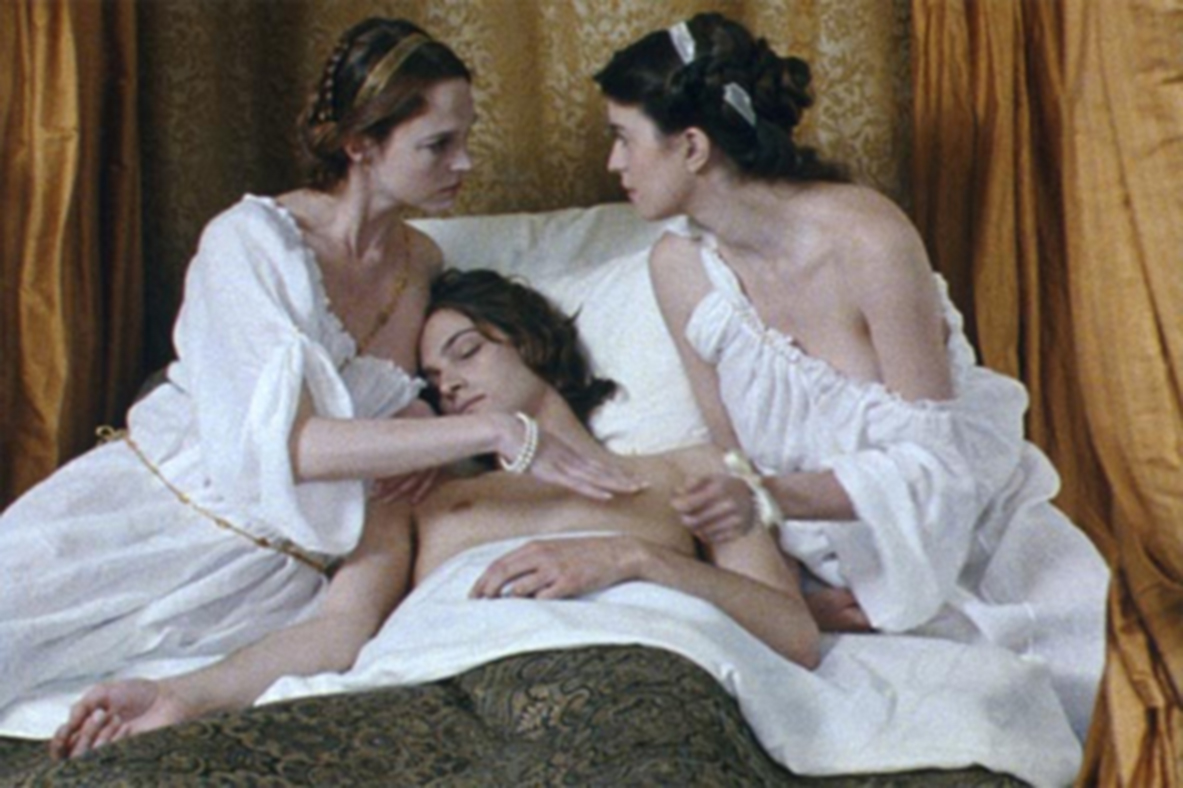 The Romance of Astrea and Celadon (2007)

http://www.theguardian.com/film/2014/dec/26/eric-rohmer-everyday-miracles-new-wave-master
Posted by Frank Black at 11:40