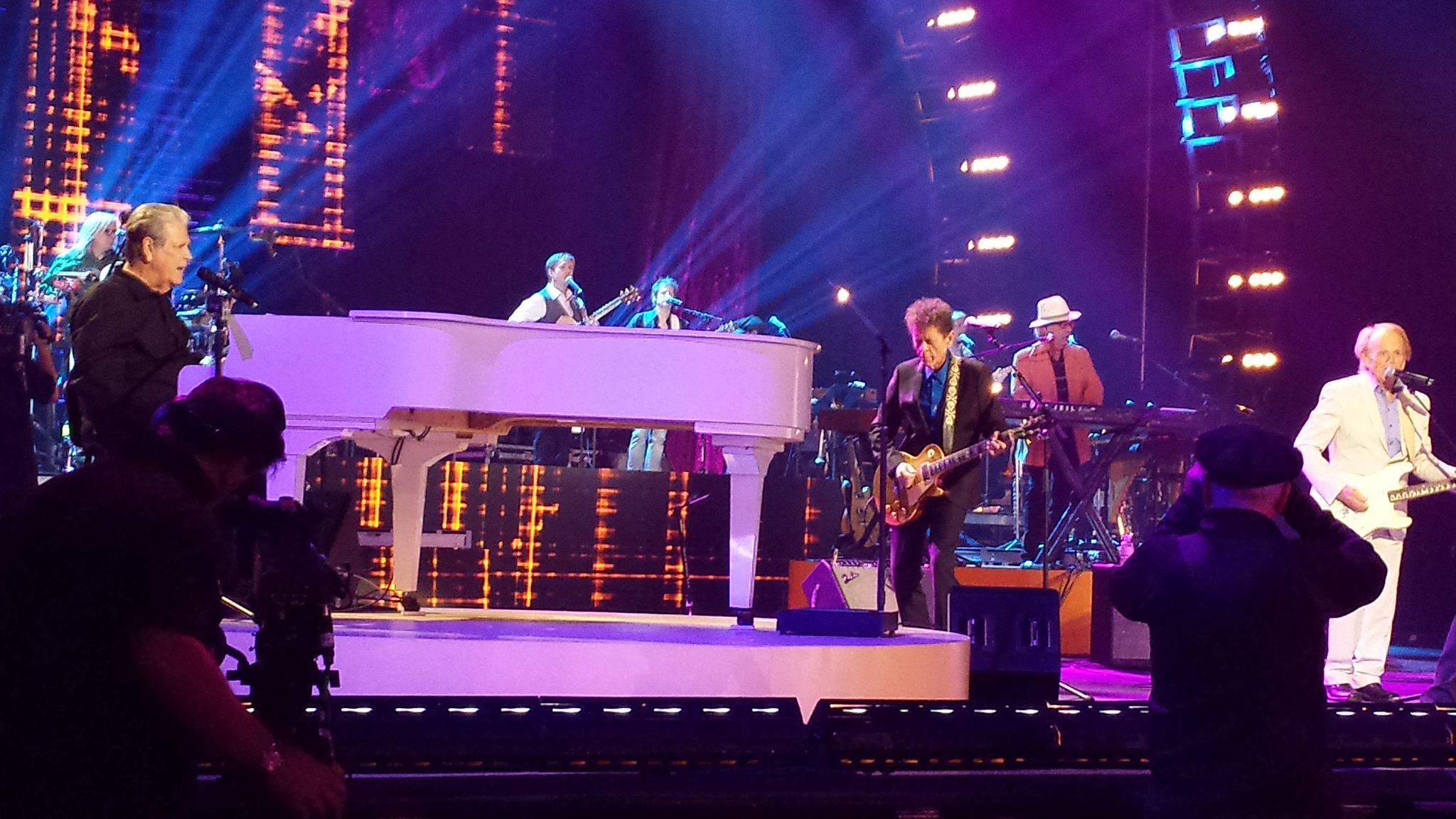 Does Brian Wilson really need an introduction? The Beach Boys founder is undoubtedly one of the most important figures in the history of music and certainly one of my favorite songwriters. Way back before I discovered punk or even started grade school, I wore out cassette copies of the Beach Boys’ greatest hits, which I can attribute to my undying love of a good vocal harmony.

As my musical tastes expanded, I came to realize that Wilson hugely influenced some of my favorite bands, including The Ramones, The Queers, Teenage Bottlerocket and Bomb the Music Industry. So, I didn’t even hesitate when the opportunity came to finally see the man live, picking up tickets to see Wilson and friends at the old Phantom Theatre in the Venetian the instant they went on sale.

The show kicked off with “Our Prayer/Heroes and Villains” right into “Sloop John B.,” pretty much the best opening one-two punch I can imagine. These songs represent the pinnacle of Wilson’s work,SMiLE and Pet Sounds respectively. The energy in the room started unusually low during those first few minutes, depleted after a delayed start and a prolonged instructional session on how to act for the camera, as this show was being filmed for broadcast on PBS next year. Many in the audience were understandably frustrated, as compared to many “for broadcast” shows, tickets were not free.

But things turned around as soon as these songs were played, and the band sounded exquisite, hitting all the harmonies like the pros they are. I’m more accustomed to seeing a few guys playing in a bar, so it was pretty nuts seeing 15 different people on stage at once, all gelling together so well, even with special guests who were not a part of Wilson’s regular tour package.

Those guests were a big part of the show, which was billed as “Brian Wilson and Friends.” Wilson and Beach Boys co-founder Al Jardine brought out 1970s era Beach Boys members Blondie Chaplin and Ricky Fataar to play songs like “Sail On, Sailor” and “Wild Honey,” while The Four Freshman’s Brian Eichenberger was brought out to sing lead on “She Knows Me Too Well.” Jazz Trumpeter and composer Mark Isham also joined the band during this time, lending his brass to instrumental “Don’t Talk (Put Your Head on My Shoulder).” This portion of the show was affectionately referred to as the “deep cuts” segment and was a great slice of history.

Since Wilson was using the night to promote his upcoming album No Pier Pressure, one that features a bevy of modern pop stars taking the microphone, he had some of those singers on hand to perform the songs live. The initial announcement that he would be working with modern acts was met with mixed reaction online, but the guy who was willing to give up lead vocals on a perfect track like “God Only Knows” 50 years ago should probably be trusted to know who is best to sing his songs.

Sebu Simonian of indie pop duo Capital Cities came out and sang new song “Runaway Dancer,” an upbeat, dancey tune. I’m not familiar with Simonian’s band but I was enthralled with his confidence and happy go lucky stage presence. He really impressed me when it came time for his Beach Boys tune, one of my all-time favorite songs “Don’t Worry Baby.” Simonian really knows how to work a crowd, making his way to the edge of the stage to goad the audience into boogying a little harder, something that’s pretty hard not to do with the pepped up tempo of this live version. Sebu’s joy on stage was infectious – I can’t imagine anyone seeing his performance and not leaving with a face splitting grin.

But as great as Simonian’s performance was, it was former The Format and current fun. frontman Nate Ruess who shined brightest. Fans of Ruess are going to love “Saturday Night on Hollywood Boulevard,” a breezy track with indie pop leanings that reminds me a lot of Ruess tracks like “Oceans” and “All the Pretty Girls.” The song sounded great live but it was Ruess’ fantastic rendition of “God Only Knows” that really wowed the audience. He seemed understandably nervous (can you imagine the pressure of performing one of the best songs ever written a Game Gear’s length away from the man who wrote it?) but ended up nailing it, receiving a huge standing ovation at the end. He may not have had Sebu’s swagger, but he more than made up for it with pure vocal power. As someone who has followed Ruess’ work since the first Format album, it was surreal and awesome to see him on a show like this, and he seemed excited and humbled by the whole thing.

The guests appearances were great, but the biggest reactions of the night came from the regular set of hits. If people didn’t know that they should be dancing, those instructions came with “Dance Dance Dance” from 1964’s Today! letting you know three times (complete with projected images of mod dancers behind the band). The hits just kept coming, with the prerequisite cover of The Crystals’ “Then I Kissed Her” (introduced as Wilson’s favorite song by Jardine), Pet Sounds opener “Wouldn’t It Be Nice” and Beach Boys staple “Good Vibrations,” a song that didn’t need the producer’s cue to get everyone to stand and sing along. Wilson’s songs have a timeless, fun quality that meant the people dancing also spanned several generations, all equally enthused by the performance.

The show was almost the complete personification of fun, though I really would have liked to hear a little more from the man himself between songs. Outside of a few minor introductions, Wilson was mostly content to let the music – and Al Jardine – speak for him (Jardine took on the role of announcer for the bulk of the night). The show’s ending after “Fun Fun Fun” was a bit abrupt, with Wilson being helped off stage immediately after the last note played off, the rest of the band bowed and things were done. But Wilson’s influence combined with the timeless quality of his songs probably means he’s said what he needs to say at this point and there’s nothing wrong with letting your songs do the talking, especially when they’re some of the all-time greats.

http://www.punksinvegas.com/review-brian-wilson-friends-feat-al-jardine-nate-ruess-blondie-chaplin-december-12-2014-venetian-theatre/
Posted by Frank Black at 07:29