Woody Allen - Now where did I leave that oxygen tank? 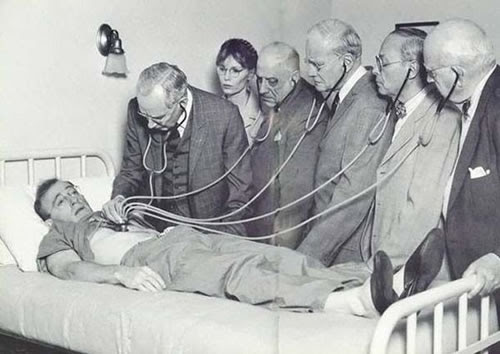 Now, Where Did I Leave That Oxygen Tank?

How my wife was able to transmute the ingredients of an award-winning recipe for chocolate brownies into twelve perfect squares of granite was a feat that only medieval alchemists could appreciate. Biting into one, I heard my tooth make the same sound Krakatoa made as it vanished, and I soon found myself in the waiting room of my dentist’s office, where I sought distraction from the treble yelping of some poor candy junkie in the chair as his molar was excavated by the latest Black & Decker equipment. Wolfing down my third Xanax, I noticed a remarkable tidbit in the pages of USA Today telling me that up to six thousand surgical patients a year leave operating rooms with sponges, forceps, and other tools mistakenly left inside them.

Creatively blocked, as I had been since the Times critic wrote a column about my last play, comparing it to typhus, I seized upon this tabloid nugget as a viable starting point for a Broadway pastiche that might just rake in the spinach required to subsidize the dementia I have planned for my golden years.

In it, the curtain rises on our protagonist, Miles Goatley, an exuberant young man of twenty-six who makes a meagre living selling meagres. Exactly what meagres are I feel will come to me while I flesh out the characters and sluice in the main themes. Suffice it to say that Goatley is in love with the succulent and raven-tressed Palestrina, whose Mediterranean beauty is of the type that lures sailors to their doom. It might serve us to have a chorus of doomed sailors in tiers upstage who can help with the exposition and keep the story moving. I’ve found that, particularly in my more complex writing, any device explaining the plot as we go along produces a calming effect on the more embittered ticket-buyers.

Although Palestrina loves Goatley, her father, an Old World Armenian rug dealer, Mr. Tatterdemalian, wants his daughter to marry one of her own kind, namely, Larry Fallopian, New York’s hottest art dealer. Fallopian is based on the real-life Murray Vegitarian, whose reputation as a gallery owner was made when he got a record price for a Marie Laurencin watercolor of two lesbians koshering a chicken. Goatley tries courting Palestrina by standing under her window and serenading her. Unfortunately, his instrument is the triangle, and the sound irritates her father, who cannot resist dropping a cinder block on his head. Vowing to become a success, Goatley forms an acting group that performs avant-garde plays written in palindromes, but the group peters out as the members start dying off from starvation.

Act I ends with the chorus warning against worship of the bitch goddess success and explaining why men with immense wealth will always prefer a well-endowed blond lap dancer to a less comely type whose strong points might be punctuality or a clear handwriting.

In Act II we meet the crackerjack surgeon Henry Postpistle and his promiscuous wife, Vendetta. Postpistle has learned to live with his wife’s peccadillos but only because he does not know what peccadillos are, as she has convinced him that they’re Mexican food. Meantime, he has sought romantic succor with Ingrid Shtick-Fleish, a baroness who comes from a once great family of German munitions makers who retooled their factories after the war and now manufacture only peashooters. She and her brother Rudolph stand to inherit a fortune when their father dies, but he has been in a coma for thirty-six years, and, while Rudolph refuses to pull the plug, Ingrid tries casually to kick it out of the wall each time she visits. Postpistle would love to run off with Ingrid, but a divorce would ruin him financially, because the baroness is used to jewels, yachts, and Beluga, and once struck him across the face with her riding crop when he dared suggest that she fill her blini with red eggs.

Meanwhile, Goatley asks for Palestrina’s hand in marriage; she accepts, but when he learns it is only her hand she is giving him, while the rest of her body goes to Larry Fallopian, he swallows a cyanide capsule he has been carrying around for two years, anxious to use it before the expiration date runs out. He keels over, clutching his abdomen, and is rushed to Our Lady of Perpetual Whining Hospital, where, near death, he calls out for one final glimpse of Palestrina—or, if she’s unavailable, any co-ed in a thong willing to do jumping jacks. An immediate operation is required, and Dr. Postpistle receives an emergency phone call to come to the hospital at the very moment he is about to make love to Ingrid Shtick-Fleish. He puts down his spray can of whipped cream and rushes off.

At the hospital, he has slipped into an operating gown when his nurse, Miss Waxtrap, bursts in breathlessly to inform him that he’s just won the New York Lottery, worth three hundred and sixty million dollars, which means that she and Postpistle can now finally go off together, something he’s always promised. My thinking here is that an affair between Nurse Waxtrap and the doctor gives us an excellent subplot, with rich potential for emotional fireworks, especially if we make her a secret agent for the Mossad.

Suddenly wealthy beyond the dreams of Croesus, Postpistle phones his lawyer, Murray Sinkhole, and has him serve Vendetta with divorce papers, charging reckless weight gain and claiming that, while he vowed at the altar to stick by her through sickness and health, for richer or poorer, for better or worse, the rabbi never mentioned fat.

Ecstatic at the prospect of a new life, Postpistle races through the operation, saves Goatley, and surprises the baroness at her penthouse with a million-dollar diamond the size of a doorknob; when she points out that it actually is a doorknob, he realizes he has overpaid. Impressed by his new net worth, the baroness surrenders to him, and all that remains is for Postpistle to claim his lottery ticket, rent a Gulfstream, and sky with her to the Caribbean island where they first met. The baroness had been vacationing there with her then husband, the British Lord Sir Gornischt Helfin. Diving off the rocks one day, she hit her head, and Postpistle, the hastily summoned surgeon, suggested amputating it. Instead, the couple started a conversation and began having an affair under her husband’s nose but found there was not enough room under his nose to stretch out, although it was the only shady spot on the island. Now, two years later, Postpistle is rich enough to take her as his bride.

But what’s this? Postpistle is at sixes and sevens because he can’t find the lottery ticket. Frantically he searches his trousers. Where did he put it? Suddenly it hits him: rather than leave the precious billet in his locker while he was in the operating theatre, he had it clutched in the palm of his left hand, secure under the tight surgical glove. Then, like as many as six thousand doctors who yearly leave remnants inside their patients during operations, he’d absent-mindedly left his glove inside Goatley, along with the Powerball prize. In a frenzy he races to the hospital and prepares to open up Goatley again, telling him that when he did the operation he left his cell phone inside and is expecting an important call.

Goatley, suspicious, checks his X-rays and spots the lottery ticket, the rubber glove, and a photo of Ann Corio he swallowed years ago. He offers to split the prize money, and Postpistle starts the operation.

Now we come to the climax, the moment of moral indecision. Postpistle realizes that if Goatley were not to survive the operation the money would be his alone. Bearing that in mind, he places a live hand grenade inside Goatley and sews him up again. Reproachfully, the chorus curses Postpistle, reminding him that the Hippocratic Oath forbids the use of explosives in treating any illness except hives. Stricken with remorse (and here I’m thinking of Postpistle’s conscience perched on his shoulder, urging him to obey his better nature, although we’d need a very tiny actor), the doctor removes the grenade before it goes off, and Goatley survives. Finally, just when all seems well, Fate, that capricious chess master, brings his queen into play: Postpistle discovers that Nurse Waxtrap has misread the lottery numbers and the ticket is worthless. The baroness drops Postpistle, saying that she will always love him but right now wants a restraining order. In an epiphany, the doctor realizes that it’s Nurse Waxtrap who truly cares for him. They marry and become a famous husband-and-wife operating team. Also a great ballroom-dancing team, whose specialty is doing the merengue while performing kidney transplants.

Goatley, under the spell of all the anesthetic, dreams at last of what meagres could be used for and lives to market them, making millions and wedding Palestrina. Of course, there are some loose ends, and I have yet to solve the problem of what he has decided the meagres actually do, but a few weeks on a Caribbean island might be just the thing to tickle my muse, particularly if my muse is wearing a thong and willing to do jumping jacks.