Jacques Tati - The School for Postmen 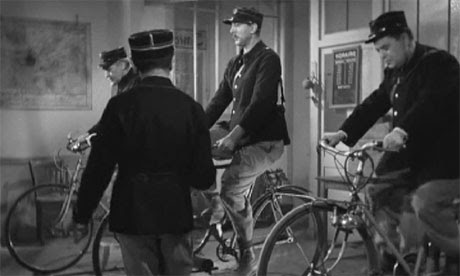 Timing is everything: why Tati's The School for Postmen delivers

Jacques Tati's 16-minute short film from 1947, L'École des Facteurs, or The School for Postmen, is all about a wacky postman on a bike, and it's sort of a prototype. In some ways, The School for Postmen is Jour de Fête with the training wheels on. This is Tati taking his brilliant sight gags and routines for a spin before he developed them into the famous full-length movie that came two years later. But it's a terrific film nonetheless, a silent movie with words — presented at a length that the great early masters like Chaplin and Keaton would have understood. It delivers the essence of Tati.

He plays a rural postman who, along with two comrades, is evidently under instruction from a snappy-voiced martinet of a supervisor who raps out his demands at an absurdly high pitch. The postmen have to cut down the time it takes them to complete their round — a round that, entirely preposterously, ends with delivering mail to an aeroplane for deliveries overseas. They have to reduce the delivery from two hours and 50 minutes to two hours and 25. It is exactly the kind of pseudo-scientific rational efficiency that Tati's anarchic behaviour is going to undermine.

All three have to work out on a special cycling treadmill, then they are despatched out into the field. Tati himself is of course instantly recognisable: tall, gawky, maladroit, with worn trousers, an ill-fitting jacket whose sleeves are too short, and a cap whose peak is tugged down in the same direction as his drooping moustache. He looks like a schoolboy who has outgrown his uniform.

His mailbag is slung bandolier-style across his shoulders, and when he shoves it to one side, it swings all the way around and hits his supervisor in the face, just as he is leaving: a neat bit of timing, which Tati makes look easy, like everything else.

Many of the setups and routines will be familiar from Jour de Fête — and one may even be familiar from Robert Zemeckis's 1985 film Back to the Future. Way before Marty McFly hitched a ride on his skateboard on automobile rear bumpers, Jacques Tati on his bicycle would insouciantly grab on to the back of a flatbed truck, and by jamming his elbows down on the woodwork, he could even get a little paperwork done.

He contrives a non-CGI surrealism in the way he sends his riderless bike careering off by itself, and a sequence of edits makes it look as if the bicycle is making a long, unbroken journey with a mind of its own. Solemnly concentrating on speed, or rather haste, Tati tries to climb over a rail safety barrier with his bike, a transparently ridiculous type of pseudo-athleticism that winds up with the bike getting hooked to the gate and hoisted into the air, wasting time, while a young woman who had been calmly waiting whooshes on ahead of him.

There are more bizarre mishaps as Tati attempts to deliver mail to someone while his fingers are sticky with glue, or while the recipients are busy ringing bells or chopping meat.

And yet with great resourcefulness and athleticism, his zany postman faces his final challenge – getting the overseas mail up, up and away. However rustic and ridiculous he may look on his silly retrograde old pushbike, Tati is to launch himself, after his own crazy fashion, into the future. It's a very enjoyable film.

• The Essential Jacques Tati Collection on Blu-ray is available now

The official Tati website: http://www.tativille.com/
Posted by Frank Black at 10:36