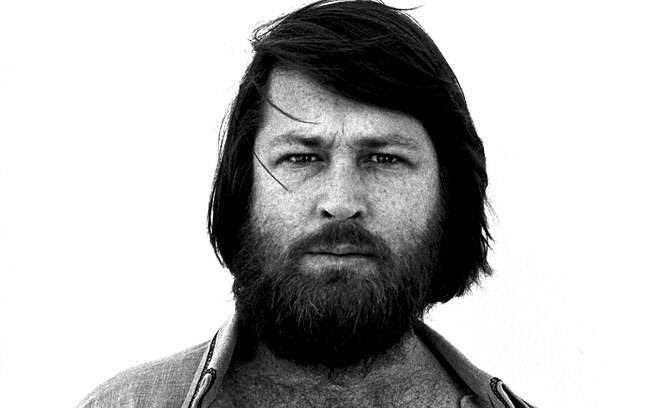 Why so serious, Brian?

Beach Boys fans are alternately thrilled and frustrated by a single copy of a three-disc test pressing of unreleased rarities and outtakes, which has suddenly surfaced. The collection, labeled Brother Re-Issues: Proposed Bonus Tracks, features a total of 56 tracks, including some widely bootlegged material in outstanding quality and others, which have never been documented before. The collection has been analyzed in depth by the Beach Boys’ connoisseur message board SmileySmile.net, with the buyer of the set, named ”Klay,” posting tidbits about his random prized find snapped up at a Southern California record store. The common consensus is that these were cuts that were passed around in-house at Capitol Records when the band's '70s catalogue -- known as the "Brother Years" after the band's boutique label and management company -- was being prepped for reissue in 2000. The albums were originally intended to be issued with a healthy dose of bonus tracks, but in the end were instead paired as "two-fers" with other albums in the catalogue.

Beach Boys author and historian Jon Stebbins has heard some of the tracks and remains floored by both quality and rarity of the material featured within: "Coming on the heels of the (recent) Made In California box, y’know, you kind of feel like, ‘Wow, we’ve gotten the best of the unreleased stuff.’ There’s just such wealth of great unreleased material on that box set that you figure anything else is really gonna be really scraping the bottom (laughs) and then all of a sudden these discs, from, I guess they probably source from, y’know, the late-‘90s, or something, when they were put together for consideration. Y’know, you find out there’s all this other amazing stuff on it, that is equal to the best unreleased things that are out there.”

During the demo for Brian Wilson's "Mt. Vernon And Fairway" -- which was released as part of the Beach Boys' 1973 Holland collection and inspired by cousin Mike Love's Inglewood, California family home -- Brian can be heard with brother Carl Wilson imitating their uncle Milton Love, calling for Love's younger brother -- and future pro-basketball player -- Stanley Love. Interestingly, Wilson had envisioned Mike Love performing the Six Teens' 1956 hit "A Casual Look" as part of the "Fairy Tale." Wilson later produced a version of Love leading the Beach Boys through the song on their 1976 15 Big Ones collection.

Stebbins feels that this newly unearthed demo proves that the officially released "Fairy Tale" ultimately represents a pulled creative punch by Wilson: “It makes more sense that way. His concept for the ‘Fairy Tale’ was way more expansive than what we got. And I think, y’know, basically, they weren’t into going back down the rabbit hole with Brian (laughs), y’know? Where. . . wherever that was gonna lead. He had an expansive concept for that. But, yeah, to have ‘A Casual Look’ in there would’ve been amazing.”

Although Brian Wilson has always been revered for the work he produced for the Beach Boys in the 1960's, frequent collaborator Mike Love told us that Wilson's music from the next decade has been unfairly overlooked over the years: "Y'know, I think Brian, when he was doing the Smile sessions and stuff, he was very dynamic. Then something happened where he shelved that for many years, until more recently. But see, the days of those -- When I called Brian 'The Stalin of the studio,' that was when we were coming out with all of those hit singles, one after another during the '60s. Then it changed. Brian's attitude and level of engagement changed. But there are some great songs that came out during, y'know, the '70s."

A substantial part of the Brother Re-Issues discs focuses on Brian Wilson’s 1976 and 1977 sessions for his two “comeback” albums as the sole producer of the Beach Boys -- 15 Big Ones and The Beach Boys Love You. We asked Wilson if he felt more or less freedom during the Love You sessions than previous albums, with Love You basically featuring him playing the majority of the instruments on his own: “Morefreedom. Very much more freedom. Yeah, a lot more freedom. Because we had. . . we gave ourselves, like 10, 12 hours a day booked time, y’know? And we took our time and we weren’t in any big rush to go anywhere, so we just took our time and recorded Love You.”

Beach Boys co-founder Al Jardine says that he's still amazed at the depth and beauty of Dennis Wilson's compositions from the 1970's: "Oh, he was the most underrated member of the band in those terms. His compositions, I think, were stronger, and they got stronger and stronger as we went along -- as he went along -- until obviously he couldn't go any further. And I just think that given time, y'know, he would've been the. . . probably the best composer in the band, outside of Brian, of course. Yeah, he just had that natural, intuitive instinct about music and lyrics. He always. . . he was the kind of guy who could get to the point without beating around the bush and, y'know, could just nail it."

“This Whole World” -- An alternate version of Brian Wilson's 1970 Sunflower tour-de-force, which features Mike Love taking the opening line, and a double -- and sometimes triple-tracked -- Carl Wilson vocal. Brian Wilson is featured on the bridge, with Dennis Wilson adding a vocal to Carl’s in the second verse. The gospel vocal fade includes a discarded drum break, which leads into a longer instrumental portion, which is reminiscent of Paul McCartney’s work the following year on Ram.

“4th Of July” -- Dennis Wilson's majestic backing track to his tune originally intended for 1971’s Surf’s Up collection, yet not released until 1993. The version featured here includes a six-string bass playing the song's melody note-for-note.

“Clangin’” -- A brief scaled back snippet of a group vocal that eventually morphed into 1977’s “Ding Dang” from The Beach Boys Love You.

“T.M. Song” -- An extended version of the faux group “argument” is tagged onto the incredibly bright and rich instrumental track, which proves that Brian Wilson had lost none of his production capacities during the first half of the 1970’s. An aural treat.

“Carry Me Home” -- A pristine, releasable mix of the oft-bootlegged Dennis Wilson Holland-era song, with shared vocal by Blondie Chaplin. 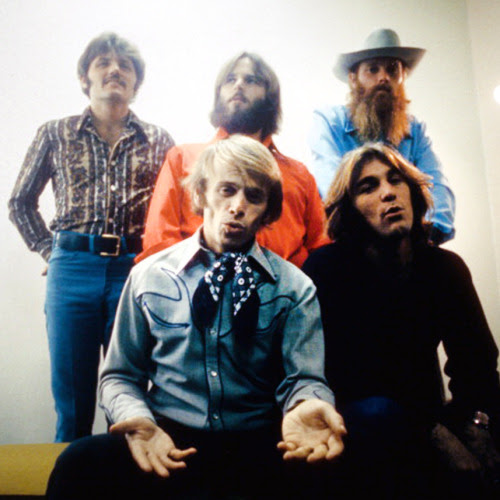 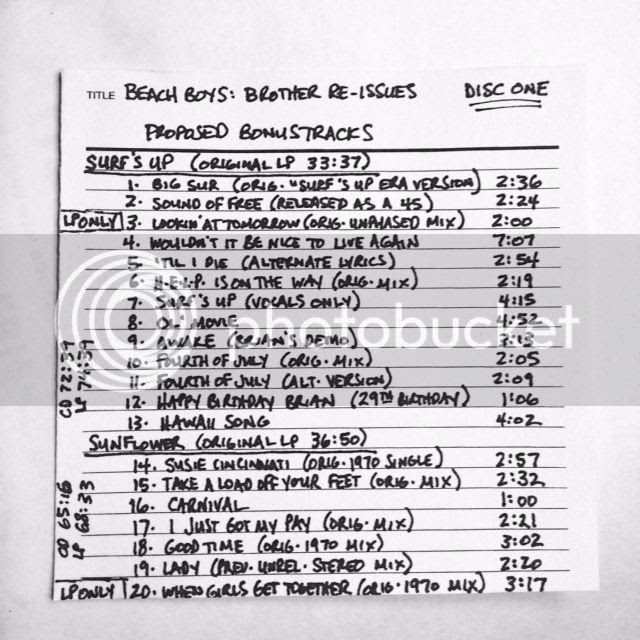 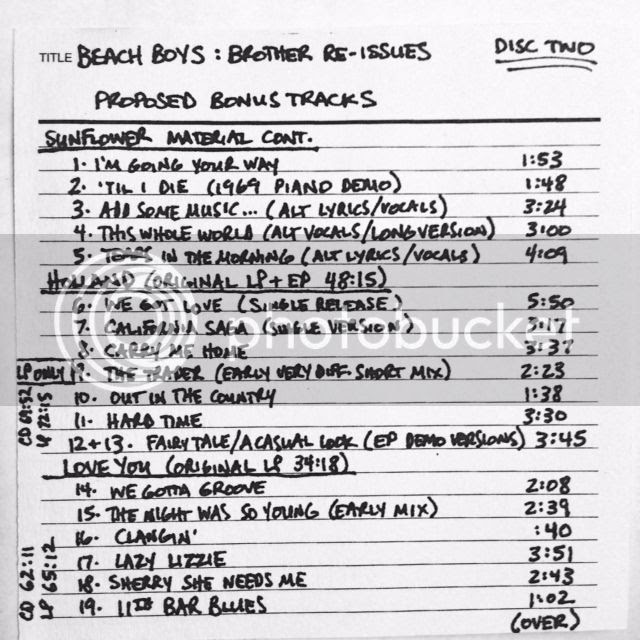 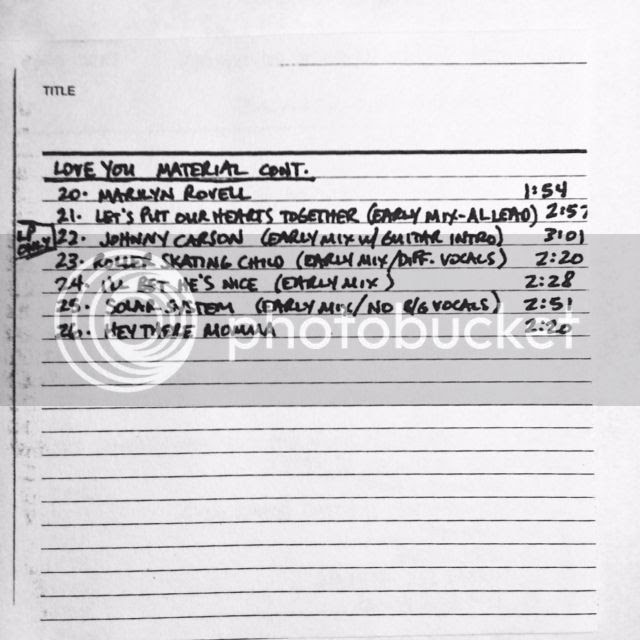 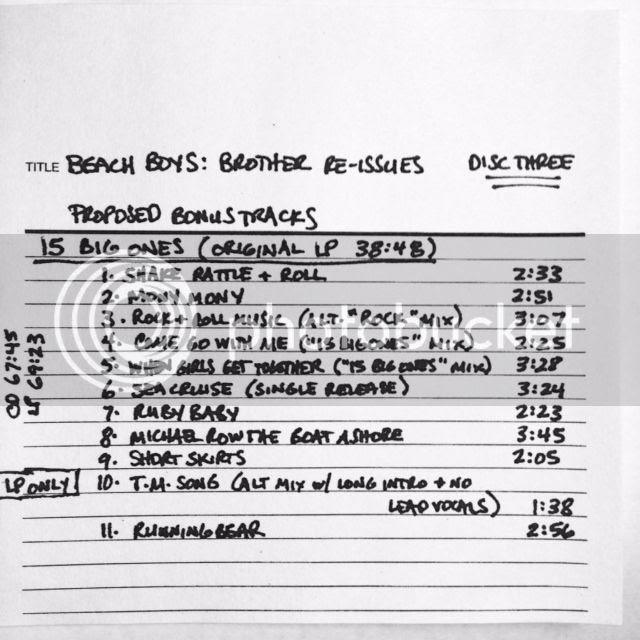 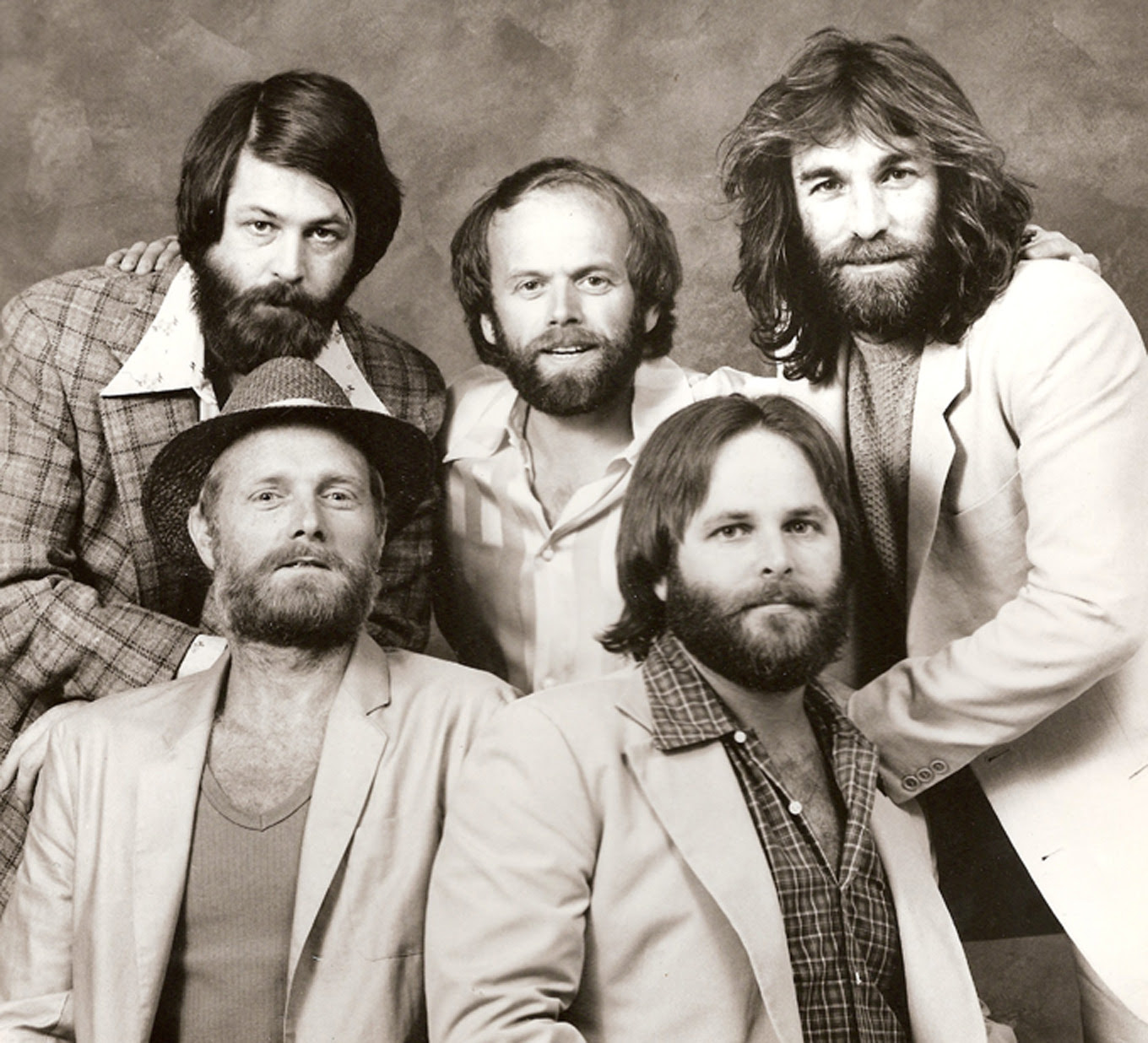 Soooo... was this the proposed tracklist for the 2CD Brother rarities set that was mooted after the original idea of each album being released with bonus tracks fell through? Maybe. It was posted by Brad Elliott back on the old Shutdown forum back in 2002, followed by the message that any resemblance between it and the aborted Brother Rarities compilation is "purely coincidental. :-)"

Hmmm. Not to read too much into this, but Andrew G. Doe reminds us that - before his fall from grace - Elliott was the man contracted to provide the liner notes for all the Brother 2fers, so who knows?