Stagecoach
John Ford, 1939
Ford’s first sound western, and it transformed B-movie cowboy John Wayne into a major star. Set in Utah’s Monument Valley, soon to become Ford’s personal landscape, it centres on a journey across hostile Indian territory by a cross-section of frontier characters, each carefully defined. They symbolised a nation emerging from the Depression into a world preparing for war. The villain is not Geronimo, nor the killer who framed Wayne, but Gatewood, the hypocritical banker decamping with his clients’ money. 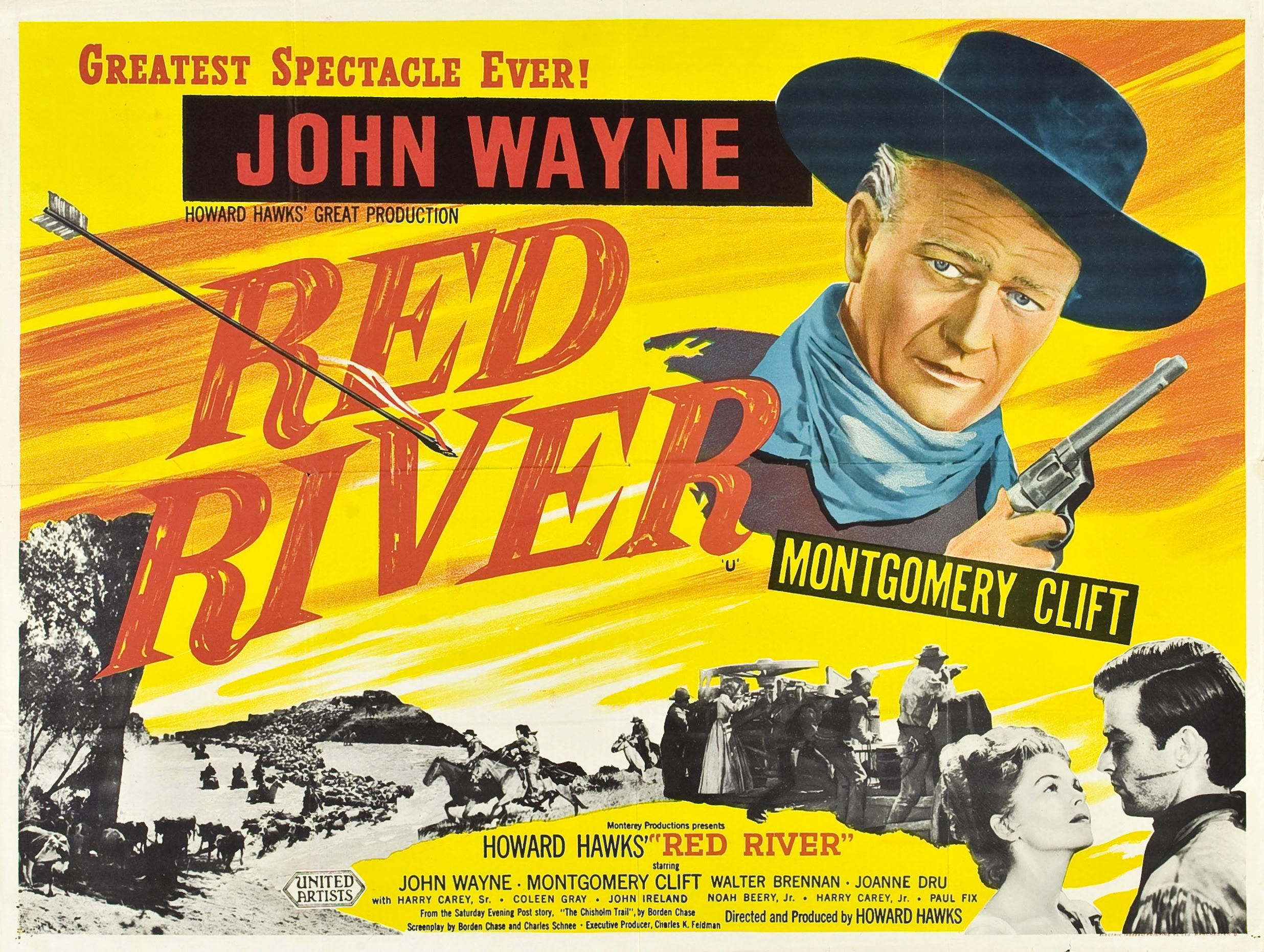 Red River
Howard Hawks, 1948
The first of Hawks’s four westerns starring John Wayne is a majestic movie centring on the conflict between martinet rancher Thomas Dunson (Wayne) and his adopted son (Montgomery Clift’s second screen role) on an arduous cattle drive from Texas to Missouri after the civil war. Joanne Dru is the classic Hawksian woman who stands between them. Screenwriter Borden Chase transposed Mutiny on the Bounty to the plains; the role of the Bligh-like Dunson reshaped the 40-year-old Wayne’s career for aggressive middle age.

High Noon
Fred Zinnemann, 1952
This taut chamber western set one Sunday morning in real time brought an Oscar to Gary Cooper as an ageing marshal deserted by his community and his new Quaker bride (Grace Kelly’s second movie) when a vicious killer comes searching for revenge. An allegory of national cowardice in the McCarthy era, its leftwing screenwriter Carl Foreman went into British exile. The film was used as a Solidarity poster in Poland, and has a famous Dimitri Tiomkin score. In 1959 John Wayne and Howard Hawks made the rightwing riposte, Rio Bravo. 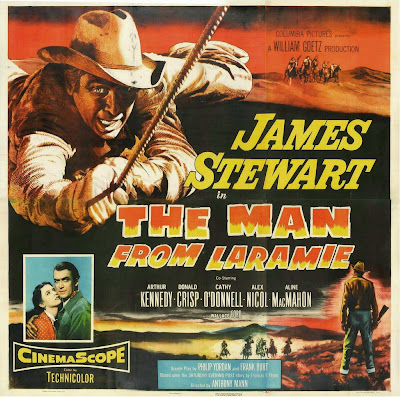 The Man From Laramie
Anthony Mann, 1955
A master of the genre, Mann made five westerns with James Stewart, all casting him as a man undergoing pain and humiliation before confronting his adversaries. Here he’s looking for the men who sold repeating rifles used by Apaches to massacre a cavalry patrol led by his brother in New Mexico, a quest that leads him into the world of a patriarchal rancher (Donald Crisp) who, like Gloucester in King Lear, can’t see straight until he goes blind. Superb widescreen photography and a memorable title song. 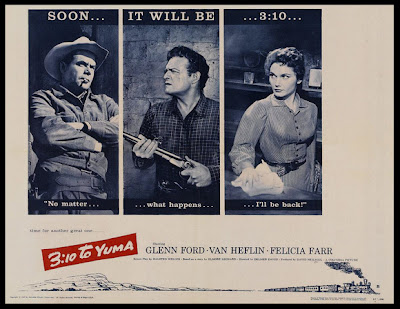 3:10 to Yuma
Delmer Daves, 1957
As a student at Stanford University, Daves worked in 1923 as a runner on The Covered Wagon and lived on a Navajo reservation. During the 1950s he directed eight fine westerns. The best is this adaptation of an Elmore Leonard story in which Van Heflin, reprising his role in Shane, plays a stolid farmer saving his family’s drought-stricken ranch by taking on the dangerous task of escorting a charismatic outlaw (Glenn Ford) on a hazardous journey to the Arizona state pen. Aspects of the Grail legend are subtly integrated into the tale. 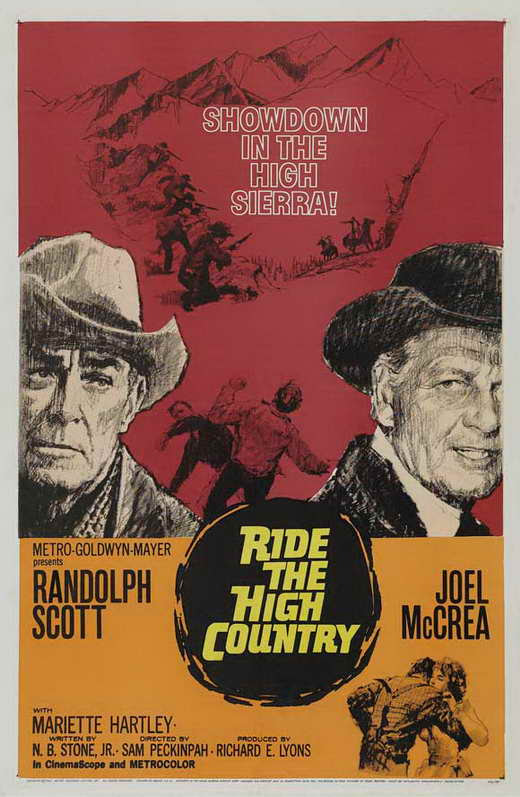 Ride the High Country
Sam Peckinpah, 1962
Set west of the Mississippi, Bloody Sam’s second movie opened quietly but soon developed a cult reputation. Well before the more violent The Wild Bunch, it was recognised as one of the finest ever westerns. Randolph Scott and Joel McCrea, both coming to the end of distinguished careers, are magnificent as elderly ex-lawmen on a final assignment in a changing west. Their job is to transport silver from a Californian mining camp; their real task is showing the next generation how to behave. The key line, McCrea’s “All I want is to enter my house justified”, evokes Luke 18:14.

Once Upon a Time in the West
Sergio Leone, 1968
Following his Dollar trilogy, which made Clint Eastwood a world star, Leone’s expansive celebration of the genre is the Everest of the spaghetti western, a violent, elegiac poem, both romantic and Marxist, that links the personal story of a laconic Mexican (Charles Bronson) searching for his brother’s killer to the epic of railroad building, with water as the leitmotif. The cast is largely American (headed by Henry Fonda as a ruthless killer), Ennio Morricone’s haunting score was written before the movie was made, and the pre-credit sequence is the quintessence of cool. 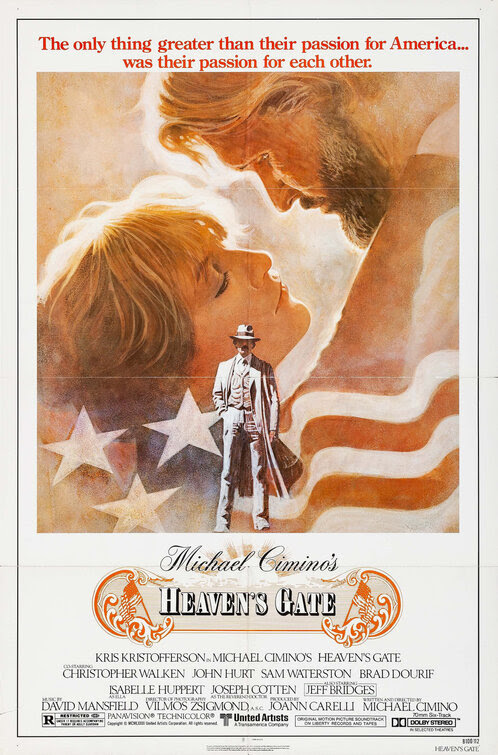 Heaven’s Gate
Michael Cimino, 1980
This flawed masterpiece (now restored and in cinemas from 2 August) was vilified by American critics, cut by its producers and was never properly released. It’s an epic treatment of the Johnson County war between impoverished settlers and rich land barons in 1892 Wyoming (the same setting as Shane), which Cimino turns into a forceful metaphor for the 19th-century American experience. Kris Kristofferson and Christopher Walken play “class traitors”, one a Harvard graduate who sides with the underdogs, the other an immigrant’s son, a hired gun for the Cattlemen’s Association. Visually stunning, memorably designed. 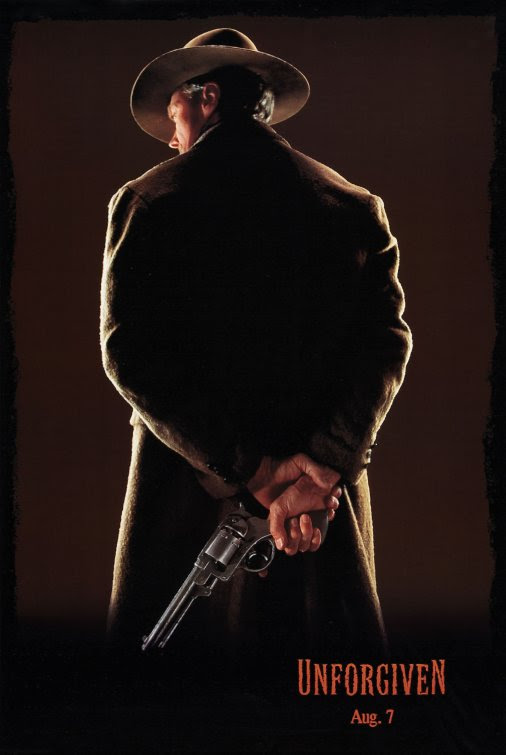 Unforgiven
Clint Eastwood, 1992
Not to be confused with John Huston’s admirable 1960 western The Unforgiven, Eastwood’s great movie attracted Oscars for best film, direction, editing and supporting actor (Gene Hackman), and a nomination for his own uningratiating performance as a grizzled frontier widower making a buck for his kids pursuing a reward offered by some disgruntled whores. It’s an outstanding picture about honour, self-respect and situational ethics. With his respect for tradition, Eastwood dedicated it simply “To Don and Sergio”, the mentors – Don Siegel and Sergio Leone – who made him a star. 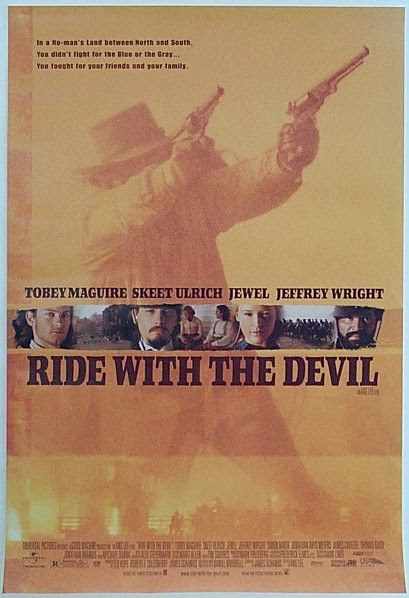 Ride With the Devil
Ang Lee, 1999
Set west of the Mississippi, where the civil war was being conducted as a violent sideshow between irregular forces, this was the last great western of the 20th century. The film traces the brutalising experiences and subsequent healing of a German immigrant’s teenage son (Tobey Maguire) who unwisely joins a brutal band of southern guerrillas. Notable for superbly staged action sequences (especially the infamous raid on Lawrence, Kansas) and attention to period language. Six years later, Ang Lee directed the most significant western of the new century, Brokeback Mountain.

As much as I respect French as the best newspaper film critic in the country and as the writer of an excellent book on Westerns, at least three of these wouldn't get near my top twenty - and two of those would struggle to get in the top thirty.. Always nice to see a mention of the original 3:10 to Yuma, with the hugely underrated Glenn Ford.
Posted by Frank Black at 21:47