LS Lowry's rage against the machine
Lowry's critics have used the fact of his paintings' repetitiveness against him, but he brilliantly reveals what happens when human beings couple with the industrial world

In 1916, LS Lowry had missed his train from Pendlebury, the Salford suburb where he lived, into Manchester. "It would be about four o'clock and perhaps there was some peculiar condition of the atmosphere or something. But as I got to the top of the steps I saw the Acme Mill; a great square red block with the cottages running in rows right up to it – and suddenly I knew what I had to paint."

Dickens and Mrs Gaskell had written about Manchester. DH Lawrence found a language for the rough beauty of the Derbyshire mines. George Bernard Shaw, JB Priestley and George Orwell were fascinated by the culture of the industrial working class: its see-saw alcoholism and tee-totalism; its unrepentant godlessness versus its low-church evangelical fervour; its brawling brutality and sudden gentleness. But no one was painting it. 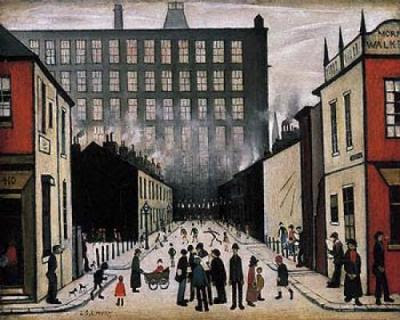 That was his brief; it became his obsession. Lowry, the sensible night-school-trained amateur artist in search of a subject, was overtaken – possessed would be a better word – by an unconscious force far bigger than either the man or his mission-statement. For the rest of his life, he spoke of that moment seeing the Acme Mill in 1916 as his vision. He was as much a mystic as William Blake was with his "dark satanic mills", or WB Yeats's "foul rag and bone shop of the heart". Where? In Lancashire.

It is pointless to try to understand Lowry the painter as Lowry the Tory, the rent-collector, the virgin who lived with his mother, the timid voyeur in the buttoned-up mac (the man can't really be an artist, he worked for a living and he never had sex). And it is beside the point to talk about his pictures as belonging, fleetingly, to a vanished world. All of us belong, fleetingly, to a vanishing world. It is fashionable to look back at Warhol and talk about how his repetitions provoked us out of familiarity when he piled up the soup cans and screen printed the Monroes – multiplying two iconic brands; the one glamorous, the other mundane – his genius to recognise that they vibrated on the same cultural wavelength.

Lowry is popular but unfashionable – a deadly combination in the art world, so his critics use his repetitions against him. It is true that one Lowry looks a lot like another, though that seems to me to be a view closer to prophecy than to criticism in our post-Lowry global village of chains and brands. This Lowry sameness interests me. At the loom, on the assembly line, on the track, the human being must perform the same task in the same way every working hour. The machine does not tire of this repetition, a repetition reinforced by the uniform lines of the mill windows, the identical terraced houses leading down to the factory. Lowry paints his figures as repeats because that is what they are – clones for the industrial machine. Units. The means of production. The machine is the antithesis of the human.

If Lowry had been painting Mao's great leap forward or Stalin's five-year plans, his faceless figures, over-sized factories, underfed bodies and drab housing would have been celebrated as critical commentary on the de-humanising evils of Communism (whose 1848 Manifesto, don't forget, was written by Marx after he had spent time with his friend Engels in Manchester). As it is, Lowry's pictures unsettle the myth of our land of hope and glory, blowing the cover story of capitalism: freedom and choice. Look at a Lowry and you are looking at a rebuke to that class whose wealth depends upon the ceaseless labour of others. These are also the people rich enough to buy art.

Lowry would have laughed at this analysis. He voted Tory all his life and worked all his life as a rent collector, bagging the pounds, shillings and pence from families who would never own their own home. Lowry's world was a week away from destitution. The weekly wage went on the weekly rent, on the weekly food, on medicine, on booze. Yet Lowry's workers, like Lowry, often voted Tory too.

Margaret Thatcher tapped into the British working-class distrust of socialism, a distrust that persuades those whose labour creates our wealth to believe it is safer in the hands of those who manipulate it. Lowry did not intend to be a political painter, but he is one. He painted what was real – the industrial life of the north of England – but he painted it past documentary and into a dialogue of the soul – what happens to a human being when they are forced to couple with the machine?

The demon world of industrialisation forces meaningless repetition. The Industrial Revolution is a story we tell about progress, about the coming of the modern. It is also the story of a collective nervous breakdown – "I have seen hell and it's white," Mrs Gaskell on Cottonopolis – the nickname for Manchester. "The piston of a steam engine worked monotonously up and down like the head of an elephant in melancholy madness," – Dickens on Manchester.

Agricultural societies and cottage industries work long hours every day, but no matter how poor and backbreaking, it is not repetitive in the way that factory work is repetitive. The seasons, the weather, the cycle of crops and gestation, all make for variety – not ease of labour, but variety. The imperative behind the Factory Acts and the trade unions' focus on cutting factory hours, happened out of a late understanding that you cannot use the work practices of agriculture as a template for industry.

Look at the famous Lowry figures. There is something static about them even in movement. This has been used to criticise his technique. But have those art critics ever looked at what happens to the human body when its only purpose is to serve the machine? Repetition produces rigidity. The body seizes up in certain positions – it's why professional musicians and athletes spend a fortune on physiotherapy.

Lowry's figures suffer even in their gaiety. The park pictures are the saddest. The bent-over bodies, the thin legs, the bewilderment of those who stand and stare. How did we get here? How did this happen to us? Mental distress is somatised as posture.

Freud recognised that humans go on repeating a trauma as a means of revealing it, with the hidden hope of healing it. Lowry kept painting the trauma. The trauma of industrialisation, the shock to the system that is the machine – until clock-out time, until the whistle blows, until death.

My father worked in a factory from the age of 14 until he was 65, with time off to kill six men with a bayonet at the D-Day landings because the ammunition was only given out to the ranks of sergeant and above. His body held all of that. He was scarred, fit, misshapen, proud. He was a working man. Who was going to paint the likes of him in his machine-stamped life? (A jaunty hat for Saturday sport). Lowry.

The closer I look at the pictures, the more variety I see. Take any of Lowry's industrial scenes and look closely: the urban drab is relieved by a bunch of flowers in an upstairs window, by a figure in a doorway, by a hand stuffed in a pocket in a whistling sort of a way, by somebody waving, by a slash of colour, by a break across the rigidly divided canvas.

Lowry's use of the flat surface of the canvas is both rigid and anarchic. Put a ruler on the picture, see what happens in what section, and where it breaks its own rules of ordered composition. Check out the horse's ears in Coming Home From the Mill (1928). Look again. The monotonous palette? The colour is there. Manchester is made of red brick, blackened by soot. Red and black are the colours of the inferno. Lowry takes the red and turns it into defiance and blood. Pride is as important as pain.

Lowry's figures are fighting back; the houses show tiny flares of human resistance against the baleful factory chimneys that stand like arrogant, blasphemous, broken crosses – the hanging beam gone; the hope of redemption gone. 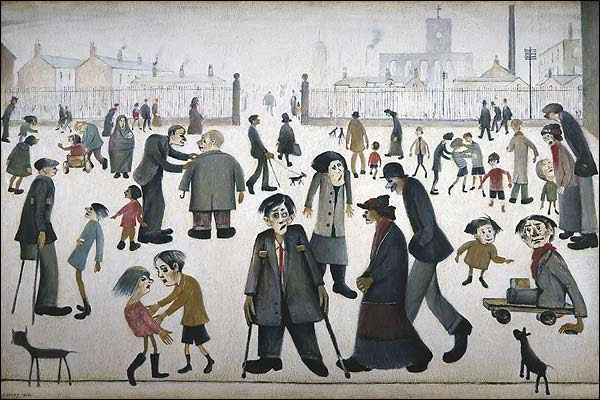 His critics say there is no interiority, no inner world, in Lowry. They say this because his scenes literally happen on the streets, and they say it as a description of what he lacks. As a rent collector, he was a man who stood on doorsteps, not invited in. And his own private world, without passion as he called it, had no glass for self-reflection. Yet it seems to me that the again and again repetition of these scenes of working-class life is more than a surface show.

Where is the inner life when you work a 12-hour day six days a week? It is not found in the cold, cramped back room of your damp terrace, it's in the talk over the fence or fishing with the dog on the canal, or listening to the street preacher and wondering if you believe a word of it. It's saving up for a mouth organ because you want to play a tune. It's the boy – any boy – watching the girl – any girl – and he's Romeo and she's Juliet, and she'll be pushing the pram like the girl behind and he'll be drunk like the man in front, but the machine hasn't broken all the dreams – not yet.

Look at them – art's not for them is it? Art is for the galleries, for the money, champagne, good taste, fancy language, the posh boys at the Courtauld, Christie's, the Tate. No wonder they keep the Lowrys in the basement.

http://www.guardian.co.uk/artanddesign/2013/jun/13/ls-lowry-industrial-world
Posted by Frank Black at 07:12