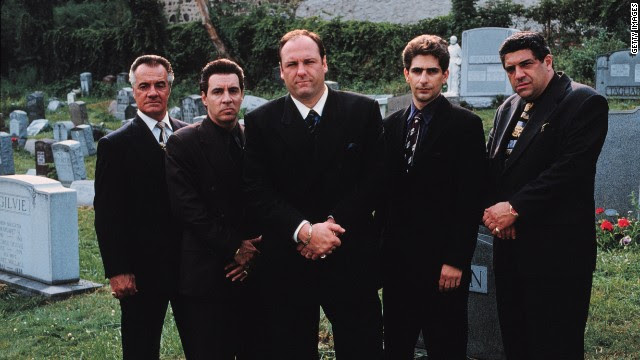 James Gandolfini, master Soprano, dies at 51
Heart attack suspected in death of much-loved actor who starred as gangster family head in The Sopranos

The actor James Gandolfini, who played mafia boss Tony Soprano on the hit TV series The Sopranos, has died of a suspected heart attack in Italy. He was 51.

Colleagues and fans expressed shock after news broke late on Wednesday. "It is with immense sorrow that we report our client James Gandolfini passed away today while on holiday in Rome, Italy," said his managers, Mark Armstrong and Nancy Sanders. "Our hearts are shattered and we will miss him deeply."

Tributes flooded in for an actor who won three Emmys and showed that being fat, bald and playing thugs was no impediment to charisma.

"[James] was a genius. Anyone who saw him even in the smallest of his performances knows that," David Chase, who created The Sopranos, told TMZ.com. "He is one of the greatest actors of this or any time. A great deal of that genius resided in those sad eyes. I remember telling him many times: 'You don't get it. You're like Mozart.' There would be silence at the other end of the phone."

Gandolfini had been due to take part in the Taormina film festival in Sicily this weekend. Mara Mikialian, a spokeswoman for HBO, the network that made The Sopranos, told Reuters the cause of death might have been a heart attack.

Gandolfini was set to star in a new series for HBO, Criminal Justice, one of several projects in the works. His film credits included Get Shorty, The Mexican, Zero Dark Thirty and In The Loop.

A New Jersey native, Gandolfini worked as a truck driver, bouncer and nightclub manager in New York before he went to an acting class with a friend and got hooked.

"I'd also never been around actors before," he told Time magazine, "and I said to myself: 'These people are nuts; this is kind of interesting.'"

He made his Broadway debut in a 1992 revival of A Streetcar Named Desire with Alec Baldwin and Jessica Lange.

The following year he played a philosophising, brutal hitman in the film True Romance, written by Quentin Tarantino, which paved the way for his lead role in The Sopranos, the gangster family saga that ran for six seasons from 1999. It swept awards and has been voted the best television show of all time.

Tony Soprano's struggles with his relatives, henchmen, psychiatrist and, above all, himself anchored the show and created a new type of anti-hero.

Deadline.com described his portrayal of Soprano as "the schlub we loved, the cruel monster we hated, the anxiety-ridden husband and father we wanted to hug in midlife crisis".

Joseph Gannascoli, who played Vito, said: "James is one guy who never turned his back on me. He was the most humble and gifted actor and person I have ever worked with."

Tony Sirico, who played Paulie, said the late star was one of his best friends. "He was there whenever I needed him. Not only did he help me with my career, but also in life, God bless him. He and I were always helping the troops, we even went to combat zones to visit the marines."

Hollywood took to Twitter to mourn its loss. "I'm truly heartbroken ... he is one of my all time favourite actors. Tragic loss," said Jonah Hill.

Colleagues and acquaintances said Gandolfini had been in high spirits and full of plans – including one for a tattoo. There had been speculation about a Sopranos movie involving the fictional family's Italian origins.

The actor is survived by his wife Deborah Lin, who gave birth to the couple's daughter in October. He also has a teenage son from a previous marriage.