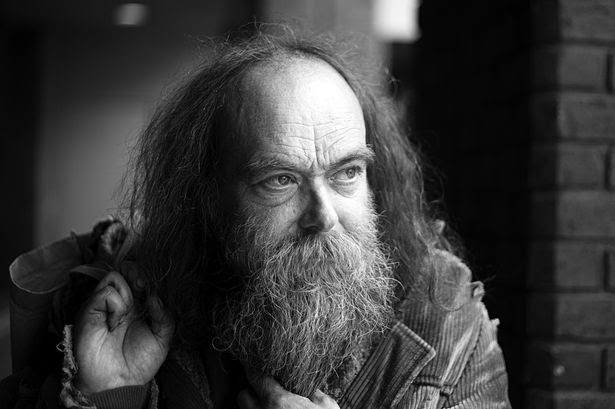 Photo by Anthony Dorman
Inside story of the death of Tyneside's most famous homeless man
Sent on to the streets by grief and sent to his death by a storm: The lonely world of the man they called Jimmy

For two decades he wandered the streets known to thousands of people simply as homeless “Jimmy”.

Quiet and solitary, he never begged for food or money or caused trouble – becoming over time a familiar figure of Newcastle life.

Today, the Chronicle can reveal the sad truth behind the late “Jimmy’s” tragic end after last summer’s Great Tyneside Storm from the amateur photographer who came to document his life.

Anthony Dorman, 37, who has grown close to the man’s family since he passed away, said: “His real name is Euan McLachlan, but he also went by the name Ian. He grew up in Walker and had been in work, but after two bereavements as a young man which he took badly he eventually ended up on the streets.

“His family never stopped looking out for him, though, and supporting him as best they could and they tried for years to stop him from being homeless, but he wouldn’t change.

“He had mental health problems, distanced himself from his job and friends and that was the road he went down.”

Last summer “Jimmy” became the centre of a social media frenzy of speculation over what had happened to him.

Online comments on a Facebook group set up about him claimed he had died with hundreds of people paying tribute to his quiet and gentle nature.

However, with no clear name Anthony – who had photographed him two years earlier as part of a project on homeless people in Newcastle – struggled to find out the truth until he received a surprise phone call from his sister in Liverpool.

He said: “I was reading online people thought he had passed away, but to eliminate any doubt in my mind I went out to try to speak to other homeless people and with homeless charities.

“They said they knew of him but not well and they didn’t know what had happened. No-one really knew his name either.

“Then out of the blue I got a call from his sister saying she had reported him missing, but had seen on the online forums that some people thought he was dead, which was really upsetting for her.

“When she finally arrived in Newcastle she and her husband found out that he had been cremated the day before and there had been no formal identification of his body by a family member.

“In fact, it was my photographs that the police used to identify him.”

Euan’s sister told Anthony that members of the public called an ambulance after finding him seriously ill on land between Rising Sun Country Park in North Tyneside and the Asda supermarket at Benton in late June 2012.

He had been sleeping rough in his usual spot, but the severe rainfall of the superstorm of June 28 sent his health into rapid decline.

After six weeks in the Royal Victoria Infirmary in Newcastle Euan, who was believed to be in his late 50s, passed away after spending nearly two decades living rough.

He was cremated but his sister does not want to release any further details surrounding his death.

Anthony said: “I used to see him for at least the last decade as someone who was very, very quiet and he never asked anybody for money or food.

“He was someone who was in work, but for whatever reason he ended up on the streets.

“His sister said the photos I had taken had helped her through her grief as in a way his place in the city had been documented.”

Nice to see the Chronic finally reporting the death of "Tyneside's most famous homeless man" - 11 months after the fact - and even then, someone else has done the work...
Posted by Frank Black at 08:22