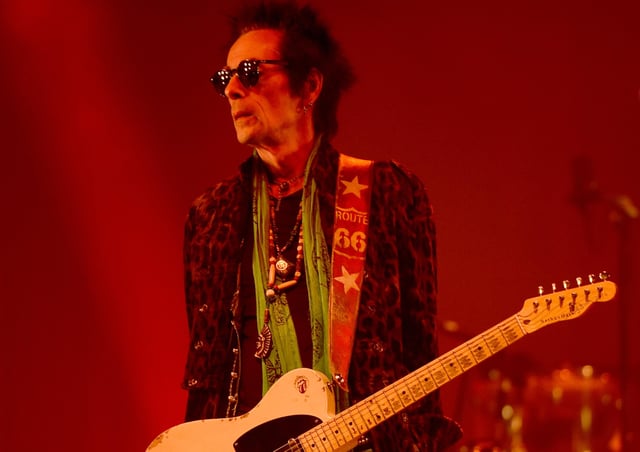 Slick, speaking on a mobile telephone en route from Heathrow Airport to Shepherd’s Bush in London, was hired to play on the ex-Beatle’s 1980 album Double Fantasy, in part because Lennon fondly recalled the way he wielded his musical axe five years earlier at the David Bowie session that produced the hit single Fame, a No 17 in 1975.

But one problem was that Slick, now 67, had no recollection of the encounter. “How could I forget meeting John Lennon? I didn’t have any memory of it,” he said, adding: “I was there. I know I played on Fame. Well, I kind of remember playing on Fame.”

His somewhat hazy recollection may be due to his self-confessed heavy drug use during the period.

Whatever the truth, the legendary guitarist was similarly frazzled – a result of jetlag, not drug use – when he disembarked from his plane to prepare for a UK talk tour kicking off at Selkirk’s Victoria Halls on Sunday. “My body has landed, now I’m waiting for the rest of me to arrive,” he quipped wearily.

What is not in any doubt is Slick’s prestigious record for musical collaborations.

And although it’s as a sideman to Bowie and Lennon that he is best remembered, he does have a Scottish musical pedigree. In the early 1970s, he toured and recorded with Glasgow-born singer-songwriter Jim Diamond, who went on to enjoy a UK number one single with I Should Have Known Better in 1985.

Slick explained: “Me and Jim were friends for years and we had a band in the States for a while. A record producer by the name of John Alcock – he produced Thin Lizzy records and my Razor Sharp record with the Earl Slick Band – got me and Jim hooked up. He flew Jim over to the States, and we were actually getting some headway when his visa ran out, and that took care of that.”

Slick’s UK tour takes the form of a conversation and question-and-answer session, with some guitar-playing thrown into the mix.

The idea emerged in 2012 when he linked up again with Lennon’s widow, Yoko Ono. “It was the South Bank in London, and Yoko was curator of the Meltdown Festival and we did the whole Double Fantasy record. They gave me a venue and I didn’t know what to do with it, and my manager said ‘why don’t you speak and do a Q&A?’.”

His links with Bowie and Lennon will no doubt dominate the questions and answers at the Victoria Halls this weekend.

Slick played on three Bowie albums during the 1970s – David Live, Young Americans and Station to Station – returning for three more, Heathen in 2002, Reality a year later and Bowie’s unexpected and much-heralded return, The Next Day, in 2013. Between times, he’d joined with Bowie for the Serious Moonlight Tour in 1984, in support of 1983’s Let’s Dance album, as a last-minute replacement for Texan blues guitarist Stevie Ray Vaughan.

That had echoes of a decade earlier when Slick had the daunting challenge of replacing Mick Ronson in the Thin White Duke’s band.

“Mick Ronson was a tough act to follow. As young as I was at the time, I was aware enough to ask myself ‘how am I going to do this?’. I was concerned enough to ask Bowie if he wanted me to be Mick Ronson, to sit there and learn his parts and everything, and he said ‘no, I hired you because I like the way you play’. He said to ‘play ’em the way you see ’em’, which saved my cookies because when we started that Diamond Dogs tour the reviews on me were good. Had I tried to be Mick, they would have killed me. Everything you read and heard about that period was what it was. All of us were out there. I don’t know how we got anything done, but we did.”

“The way we did those records was a lot different to how we did them in the seventies. Things were way more focused. Bowie was a different person. We all were more stable across the board. When you take the drugs away, you kind of become a human again.”

When Slick was asked to play on Lennon and Ono’s Double Fantasy album in October 1980, the ex-Beatle hadn’t released a record for five years, but he proved a relaxed presence in the studio.

“He didn’t miss a beat when he took those five years off. He was on his game. He really was so easy to work with because he considered himself a band member as opposed to an artist with a backing band.

“He felt more comfortable being part of that than being separated from us and that got better performances out of us.

“It was pretty much the same. Maybe he might have been a little concerned that the time off was an issue with his voice but by no means was he insecure about it.

“He was very well together at the time, and any socialising with him would involve me dropping off at the apartment to have a cup of coffee and talk about the material. At the end of the sessions, he would just sit there and tell stories and jokes or go out to dinner once in a while.

“I was in Los Angeles when I heard he had been shot. I was gearing up to go back to New York for the Christmas holidays and was going to stay on because we were supposed to go back in the studio with John in January to finish up the tracks that eventually became the Milk and Honey album and then go into rehearsals for a tour which obviously didn’t happen.”

Tickets for Slicky Speaks – Earl Slick in Conversation with Jesse Smith at the Victoria Halls on Sunday from 8pm are £14.30. For details, go to liveborders.org.uk, wegottickets.com or call 01750 21382. Details of the rest of the tour can be found at facebook.com/EarlSlickOfficial

A little closer to home, Slick entertains at The Cluny on Wednesday 13 November: