William Christopher, who played kind-hearted priest Father Mulcahy in the TV series M*A*S*H, has died at 84.

The actor, who was diagnosed with cancer 18 months ago, died at home in Pasadena, California, on Saturday.

He appeared in all 11 seasons of M*A*S*H, a bittersweet comedy about the life of a US medical unit during the 1950-53 Korean War.

Christopher, who was born in Chicago, moved to New York to work as a theatre actor after college. He later went to California, securing several television roles.

Then in 1972 he was cast in M*A*S*H, a television series that followed a film of the same name.

M*A*S*H stands for Mobile Army Surgical Hospital, and the series centred on a unit, the M*A*S*H 4077, and the lives of the doctors and nurses who staffed it.

Christopher played the camp chaplain, a courteous and compassionate presence who counselled medical staff and patients amid the chaos of the war.

He was one of four cast members who appeared in every season of the show*. When it ended, he briefly appeared in a spin-off, After M*A*S*H, with two other cast members, as well as other television work.

"Everyone adored him,'' she said. "A great sense of humour and a great humanitarian. He became TV's quintessential padre as Father Mulcahy on M*A*S*H."

* ... though not in the pilot; there he was played by George Morgan, who continued to be seen in long shot during the titles of EVERY episode. Christopher first appeared in the third episode of the series, Requiem for a Lightweight. 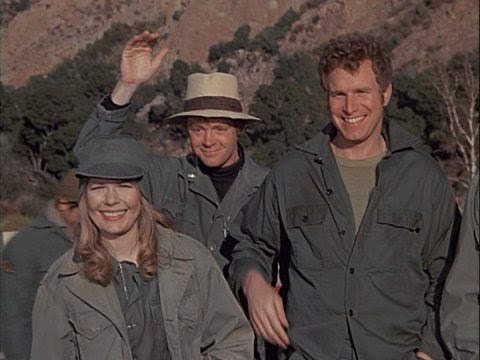 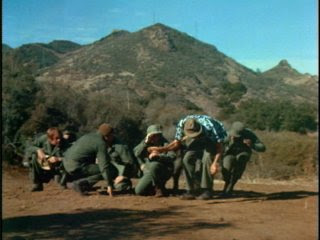 That's George Morgan at left during the titles sequence.

Why was he not in the pilot? Here's the man himself:

"I was in an improv group at the time and we used to improvise comedy every Friday night in a little theater. So I felt very confident this role was right for me so I thought I’d just improvise instead of using the lines they-Larry Gelbart, who’s such a premiere writer, and who wrote the plot for MASH and who did so much writing on the show. He was the writer of the show I was using to read by. It never occurred to me that he might really want to hear his own words. It was a mistake. But after that first reading and I was told that was not the way to go, happily they called me back to do another. And I went back the next day and then they were much more pleased. I did it the way you were supposed to.”

Frank: "Have you ever given a lecture about temperance, Father? About the evils of drink?"

Father Mulcahy: "Uh, no. On the troop ship, I was once asked to do one about the sex thing."

Father Mulcahy: "Being celibate, I didn't feel qualified. They brought in a Protestant. He had a film about two sailors. One was from Cleveland ostensibly, the other a small rural area. The city boy stayed on the ship and wrote his high-school sweetheart. A lovely young girl with a megaphone on her chest."

Frank: "Father, this is a bit different."

Father Mulcahy: "The country boy lived in a trailer with three other young ladies and a man with a whip."

Father Mulcahy: "Broke his wristwatch and everything."

His pals from MASH miss Bill powerfully. His kind strength, his grace and gentle humor weren't acted. They were Bill. - Alan Alda, 1 January 2017
Posted by Frank Black at 09:59