The Pre-Raphaelite Sisterhood at The National Portrait Gallery 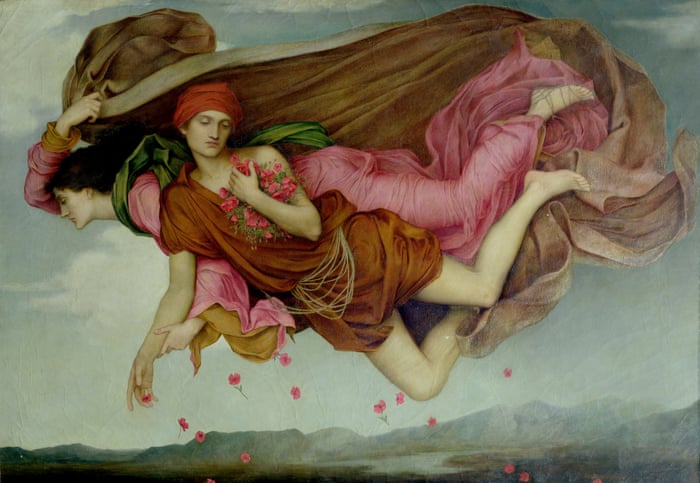 Pre-Raphaelite Sisters review – the heroic women behind the frilly-shirted bro-fest
National Portrait Gallery, London
Women supported the Pre-Raphaelite Brotherhood, as lovers, helpers and models – but they were rewarded with paintings that depicted them as objects of fantasy

The latest effort to write women back into art history, Pre-Raphaelite Sisters offers a female take on that frilly-shirted testosterone-fest, the Pre-Raphaelite Brotherhood.

Like the Barbican’s Modern Couples exhibition last year, the show reminds us that a work of art seldom springs, magnificent, from a single imagination, but is to an extent the product of a social group. Ideas have been discussed, books exchanged, manifestos written, costumes made and poses held: someone, too, has checked supplies, dressed the kids, noted down orders, paid the bills, and made sure that the artist has had breakfast.

Formed by young painters and their circle in 1848, the Pre-Raphaelite Brotherhood was inspired by Italian art of the 15th century, and favoured dramatic literary themes. There are lesser-known female artists on the fringes of the Brotherhood and the subsequent aesthetic movement – notably Marie Spartali Stillman, Maria Zambaco and Evelyn De Morgan – but their work is only a fraction of Pre-Raphaelite Sisters. Instead the exhibition revisits the role women played in the wider story, as models, lovers, wives and helpers. 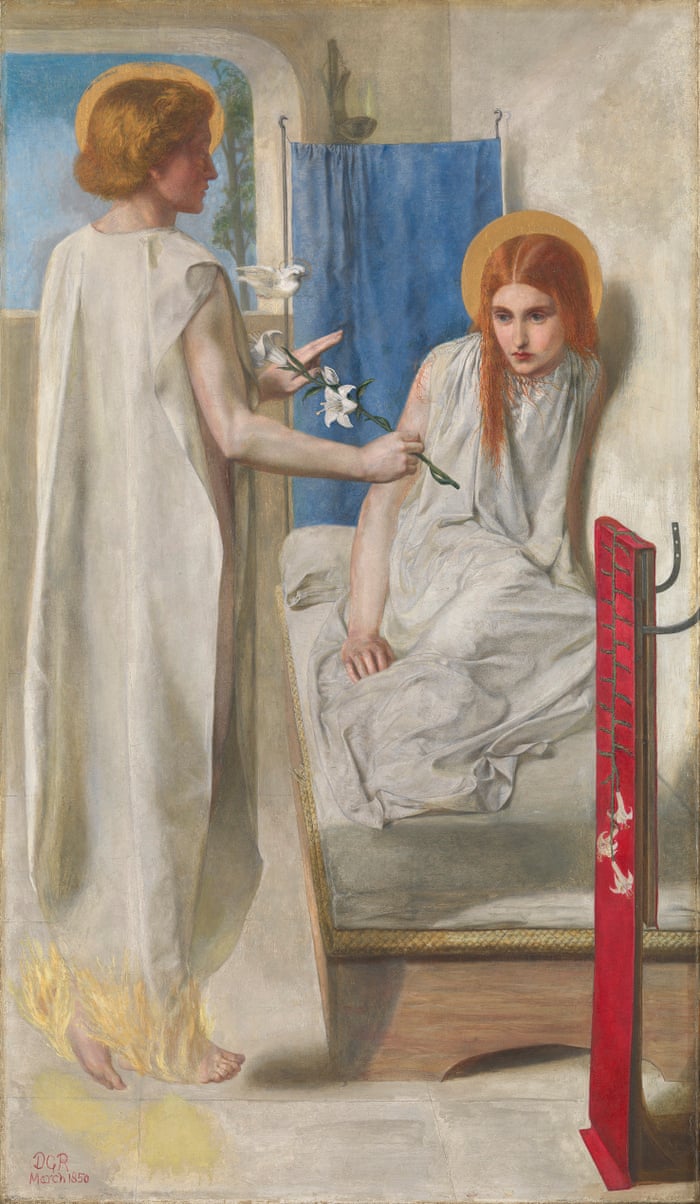 These “sisters” are in some cases literally so: poet Christina Rossetti was sibling to artist Dante Gabriel. He illustrated her intoxicating poem Goblin Market and she sat for his pictures: in youth, as the virginal Mary visited by an underdressed and distinctly male archangel; later, magnificent and resolute, for a chalk portrait that escapes the male Rossetti’s tendency towards gushing sensuality.

In the main, women here enter the story as models or love interests, frequently both. Few of the paintings here are portraits in the literal sense. Instead, they show these models and muses assigned feminine roles that evoke the Victorian fantasy of the fallen woman in need of masculine chivalry: prostitutes and mistresses; tragic heroines; much less frequently, femmes fatales. 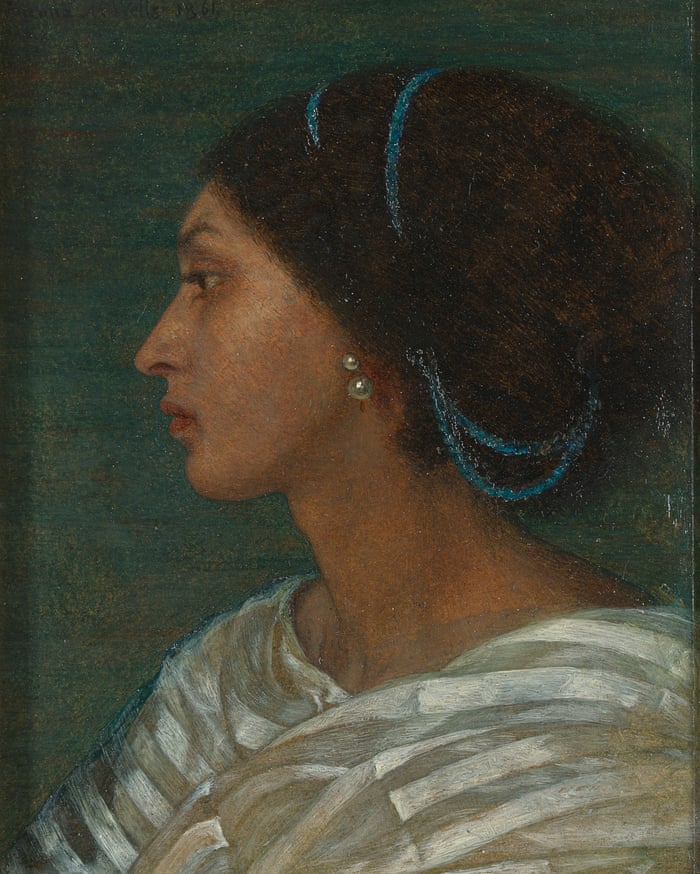 The curators make a case for these women to be see as precursors to the great fashion models of today, playing an essential role in the creation of the final image. But as Christina Rossetti’s poem In an Artist’s Studio suggests, the artist paints the fantasy, not the woman: “Not as she is, but as she fills his dream.”

Pale-skinned, auburn-haired Elizabeth Siddal was the model for John Everett Millais’s Ophelia, and countless works by her lover Rossetti. William Holman Hunt was fascinated by Annie Miller, who appears aged 18 as a kept woman in The Awakening Conscience: a cat playing with a bird beneath the table suggests her perilous fate. Naturally, Rossetti, too found her a great inspiration. Ditto Fanny Cornforth, and his friend William Morris’s wife Jane. As a married woman, Jamaican-born Fanny Eaton escaped a crossover role as a lover, though enjoyed some success as a model. 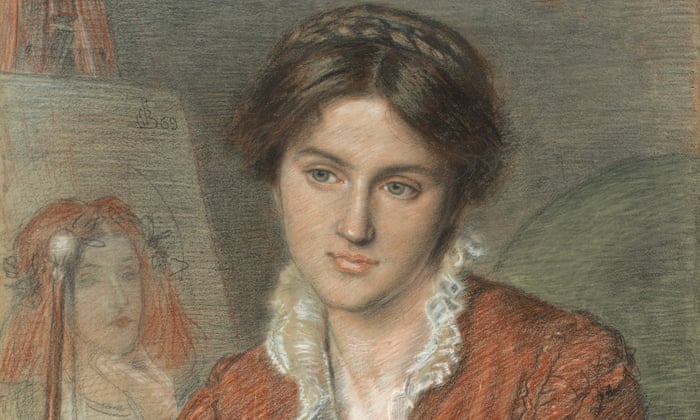 What of these women as artists? Spartali Stillman, Zambaco and De Morgan had the wherewithal to receive proper training. Most models did not – modelling was not a respectable profession, ergo almost all came from families that could not support private art education. Rossetti certainly encouraged Siddal’s aspirations but, for a woman, art school was not an option (Slade, the first British art college to admit women, opened nine years after her death). Even the curators admit that the figures in her dramatic compositions are “boneless”. 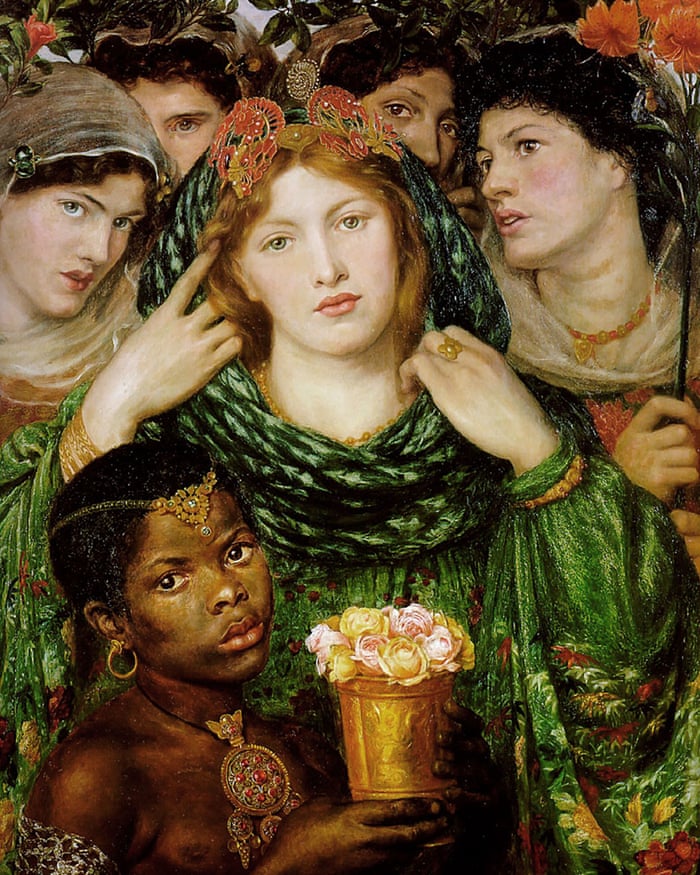 Rossetti’s The Beloved by Dante Gabriel Rossetti - Fanny Eaton is at the back, right

Curator Jan Marsh has written brilliant books on the forgotten women around the pre-Raphaelites. That this exhibition seems to make a less forceful case for them as a creative force is perhaps a question of venue: the National Portrait Gallery is not the place for Jane Morris’s wonderful embroidery, for example. This is not the place to cherish craft. The focus remains the human figure, for the most part still female, and for the most part still painted by men.

Pre-Raphaelite Sisters is at the National Portrait Gallery, London, from 17 October to 26 January