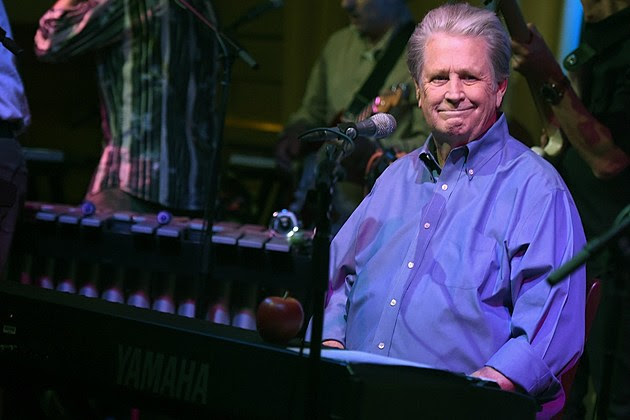 A packed house paid homage to Brian Wilson and his amazing band as they played the celebrated Pet Sounds album and a collection of hits and deeper cuts.

This was Wilson’s third time at The Sage after his 2004 Smile show at Newcastle City Hall and I’d be lying if I didn’t say that his vocal delivery has become more idiosyncratic. At times, he belted out the numbers, at others, he opted for a lounge singer approach. Perhaps because at he’s now 73, he sang fewer leads than previous visits but was more than ably supported by fellow Beach Boys Al Jardine, Blondie Chaplin and Al’s son and former Beach Boys touring band member, Matt Jardine, who hit the high notes Wilson can no longer reach.

The first half was a mix of hits and ‘deeper cuts’ and a superb reminder of the range of Wilson’s song-writing. While it was sad to him ceding the bridge on Surfer Girl to Chaplin, it was a pleasure to see the latter take lead vocals and play some blistering guitar on Wild Honey, Funky Pretty and Sail on Sailor, for which, of course, he was the original vocalist.

Long-time Wilson band member and conductor and arranger Paul Von Mertens referred to Chaplin, who, after spending so long playing with the Rolling Stones bizarrely sports their somewhat weathered appearance, as ‘the real deal,’ but surely that accolade belongs to 73 year-old Al Jardine. He may have lost a bit of his upper register, but his voice remains remarkably like it was 50 years ago and he retains a boyish enthusiasm for the music. His take on Cotton Fields was alone worth the price of admission.

Despite the occasional flub, the notoriously ill-at-ease Wilson was in good humour throughout, putting the band through their paces to sing the chorus of John Fogerty’s Proud Mary before stopping them and adding wryly, “We don’t know the rest…”

Pet Sounds followed the interval, with Wilson singing God Only Knows as the obvious highlight, followed by a standing ovation, though Wilson and the Jardines' rendition of Sloop John B was equally appreciated. After the sound of the train passing and the barking dogs faded, Good Vibrations kicked in a rousing finale until Wilson sang, an affectingly hesitant Love and Mercy to round off the night.

Leaving any gig is a downer and a good one like this, even more so, but the foyer was filled with an air of melancholy, like the fade at the end of Caroline, No. There was something extra poignant about this show: it’s likely to be his last tour and while he still wants to record, the door is closing on a remarkable career.

Wilson had commented as he left the stage at the interval that this was music therapy. And it was. For everybody.