The Gorbals Vampire of 1954 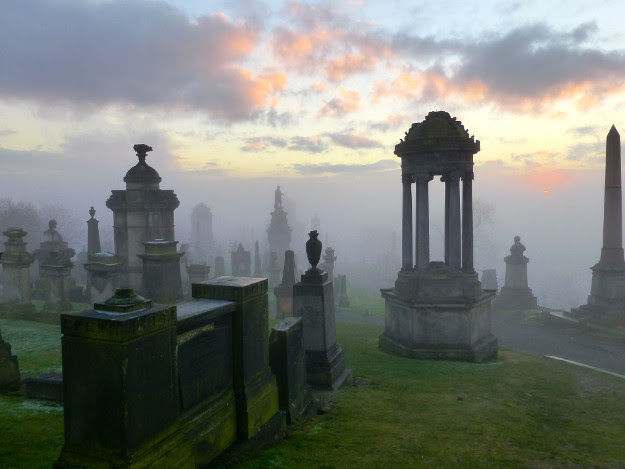 When PC Alex Deeprose was called to Glasgow's sprawling Southern Necropolis on the evening of 23 September 1954, he expected to be dealing with a simple case of vandalism.

But the bizarre sight that awaited him was to make headlines around the world and cause a moral panic that led to the introduction of strict new censorship laws in the UK.

Hundreds of children aged from four to 14, some of them armed with knives and sharpened sticks, were patrolling inside the historic graveyard.

They were, they told the bemused constable, hunting a 7ft tall vampire with iron teeth who had already kidnapped and eaten two local boys.

Fear of the so-called Gorbals Vampire had spread to many of their parents, who begged Pc Deeprose for assurances there was no truth to the rumours.

Newspapers at the time reported that the headmaster of a nearby primary school told everyone present that the tale was ridiculous, and police were finally able to disperse the crowd.

But the armed mob of child vampire hunters was to return immediately after sunset the following night, and the night after that.

Ronnie Sanderson, who was an eight-year-old schoolboy in the Gorbals area of the city when the vampire scare was at its height, described how Chinese whispers in the schoolyard escalated into full-blown panic.

He recalled: "It all started in the playground - the word was there was a vampire and everyone was going to head out there after school.

"At three o'clock the school emptied and everyone made a beeline for it. We sat there for ages on the wall waiting and waiting. I wouldn't go in because it was a bit scary for me. 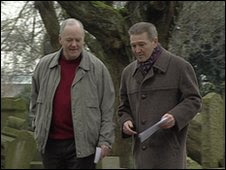 "I think somebody saw someone wandering about and the cry went up: 'There's the vampire!'

"That was it - that was the word to get off that wall quick and get away from it.

"I just remember scampering home to my mother: 'What's the matter with you?' 'I've seen a vampire!' and I got a clout round the ear for my trouble. I didn't really know what a vampire was."

There were no records of any missing children in Glasgow at the time, and media reports of the incident began to search for the origins of the urban myth that had gripped the city.

The blame was quickly laid at the door of American comic books with chilling titles such as Tales From The Crypt and The Vault of Horror, whose graphic images of terrifying monsters were becoming increasingly popular among Scottish youngsters. These comics, so the theory went, were corrupting the imaginations of children and inflaming them with fear of the unknown.

A few dissenting academics pointed out there was no mention of a creature matching the description of the Gorbals Vampire in any of these comics.

There was, however, a monster with iron teeth in the Bible (Daniel 7.7) and in a poem taught in local schools. 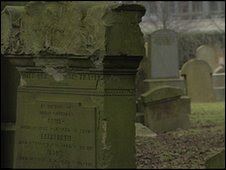 The Southern Necropolis provided the perfect setting for a vampire story

But their voices were drowned out in the media and political frenzy that was by now demanding action to be taken to prevent even more young minds from being "polluted" by the "terrifying and corrupt" comic books.

The government responded to the clamour by introducing the Children and Young Persons (Harmful Publications) Act 1955 which, for the first time, specifically banned the sale of magazines and comics portraying "incidents of a repulsive or horrible nature" to minors.

Another of those who had gathered at the graveyard as a child, Tam Smith, said the Necropolis provided the perfect stage for a vampire story to take root, with the noise and light from the nearby ironworks casting spooky shadows across the graves in which some 250,000 Glaswegians had been laid to rest.

Mr Smith said it had been common for naughty children in the area to be threatened with the Iron Man - a local equivalent of the Bogeyman - by their exasperated parents.

Neither Mr Smith or Mr Sanderson had televisions in their homes at the time, and neither had ever seen a horror movie or read a horror comic.

Comic book expert Barry Forshaw said getting their hands on one of the underground American horror comics had been like finding the Holy Grail for schoolyards of British children reared on the squeaky clean fare found every week inside the Beano and Dandy - both of which are produced in Scotland.

The story of the Gorbals Vampire had been a gift to the unlikely alliance of teachers, communists and Christians who had their own individual reasons for crusading against the corrupting influence of American comics, he said.

Mr Forshaw added: "It was a perfect fit. Here was a campaign that was looking for things to justify itself, and then this event happens.

"It is ironic that the moral furore began in Scotland, where the comics could not have been more safe." Not so much piece of folklore, but a relatively modern phenomenon with folkloric undertones, the event that was the Gorbals Vampire still has people scratching their heads. It was quite a peculiar affair that had surprising repercussions, the most significant of which was the 1955 Children and Young Person’s (Harmful Publications) Act, which restricted access to gory horror comics imported from America to kids. How that came about will become clear later.

It all began one evening in September 1954 when hundreds of children, pupils at the various schools in the Gorbals, descended on the Southern Necropolis cemetery in Caledonia Road, after hearing rumours of a seven feet tall vampire with an iron jaw who had killed and eaten two local boys in the graveyard. If a vampire hunt was going to be held anywhere in a Glasgow suburb, no better place could have been chosen.

At the time, the Gorbals was a notorious slum packed with decrepit tenements. The Southern Necropolis is a vast cemetery, entered from Caledonia Road through a gothic gatehouse. At the time, it was backed by the Dixon’s Blazes iron works, which operated round the clock. After sunset, the sky around the works would be lit with an atmospheric red glow that no doubt added to the creepiness of the Southern Necropolis. It was against this backdrop that the children, armed with various rudimentary weapons, went in hunt of their vampire and swarmed the cemetery.

The local police were used to having to deal with the odd act of vandalism in the Southern Necropolis, and when calls came in from residents of Caledonia Road relating to kids running amok in the graveyard, it seemed to be another routine call. PC Alex Deeprose was sent out to deal with it and he was gobsmacked by what he saw. He was faced by hoards of children drowning each other out trying to tell him what was going on, as well as concerned parents asking him if what the kids were saying was true. The shaken officer hid in a close to pull himself together, and then went out sort it out. Eventually, the children only dispersed after the headmaster of a local school addressed them.

The following day, assemblies were held in all the Gorbals schools, in which the pupils were told there were no such thing as vampires and that they weren’t to go carousing around the local cemetery looking for them. The tale of the two boys the vampire was supposed to have murdered was unfounded, as there were no children reported missing in the Gorbals at the time. Despite this, there were still impromptu stake outs in the Southern Necropolis, until it eventually died down.

It’s probable that the entire event would have been consigned to obscurity if a reporter hadn’t been making routine calls round the police stations in search of stories for now defunct Glasgow newspaper, The Bulletin. At first, the reported got the stock answer that there was nothing happening, before there was a fit of laughter and he was told about the vampire hunt. After featuring in The Bulletin, the story of the vampire spread like wildfire, eventually coming to the attention of the international media. Questions were raised in Westminster about how on earth the children got the idea in the first place.

Attention soon turned to the luridly gory horror comics that were freely available to children at the time. These were American imports, and featured fairly graphic and grisly tales. It was argued that a child, having read such a comic, then cooked up the vampire lurking around the Southern Necropolis. This coincided with a growing campaign in the British Isles to bring about legislation preventing children accessing the horror comics.

There were sceptics who didn’t think that the vampire came from a comic; some had even gone through the comics and failed to find a story that matched the seven foot, iron jawed vampire described by the Gorbals children. The sceptics pointed to other things that could have provided the germ of inspiration. One was a passage in the Bible, Daniel 7:7, which vividly described an iron mouthed monster, to a poem written by Alex Anderson in the 1870s called Jenny Wi’ The Airn Teeth, featured in several anthologies used in schools in the 1950s.

The poem in Scots describes a female monster with iron teeth, stealing off into the night with children who cried and fussed during the night. Despite this, the anti-comics lobby held sway, and the Gorbals vampire hunt brought about the 1955 Children and Young People (Harmful Publications) Act, which stopped children’s access to graphic horror comics.

In 2010, the vampire hunt was featured in a short Radio Four documentary, in which the now elderly vampire hunters recalled the exciting night. The documentary also highlighted a story that appeared in a 1953 issue of the Dark Mysteries comic called “The Vampire With The Iron Teeth” that may have inspired the Gorbals vampire after all. This was also discussed by a blog, The Horror Of It All, in 2009. On the face of it, it would seem that the anti-comic brigade might have been onto something after all. But again, like the Daniel 7:7 passage and the Jenny Wi’ The Airn Teeth poem, it’s just another piece of speculation. Like any classic folktale, it’s doubtful we’ll ever know the true origins.

Jenny Wi’ The Airn Teeth can be read on The Scottish Poetry Library website.

There was, indeed, a horror comic about a vampire with iron teeth: Courtesy of http://flashbak.com/the-gorbals-vampire-ate-children-and-created-a-moral-panic-in-1954-34125/
Posted by Frank Black at 16:47