Bird’s Eye View of the Sea Coast
Leonardo da Vinci (c1515)
The sea covers almost three-quarters of the Earth’s surface, but few artists before the age of flight ever thought of its immense geographic spread across the globe. Leonardo, as in so many other ways, is a pioneer. Here he imagines the sea off the coast of Italy, fitting snugly into the curving bays, meeting the land like a fitted carpet of blue. The image is partly a map, partly a relief – the land is wavy with mountains – but mainly a vision of how the sea-covered world might look from high above in the air. Ocean
Vija Celmins (2005)
The Latvian-American artist Vija Celmins holds the waters of the ocean still for a moment with her immense graphite drawing, a million exquisite marks to elaborate a few feet of rippling surface. She seems to be right out there, hovering just above the deep. Pencil turns out to be perfect for the ocean, monochrome on a grey day, its ceaseless and irregular movements registering in an almost infinite range of tones. Celmins’s image appears almost photographic in its hard-won detail, yet it feels as alien as a moonscape, shadowed with unfathomable secrets. 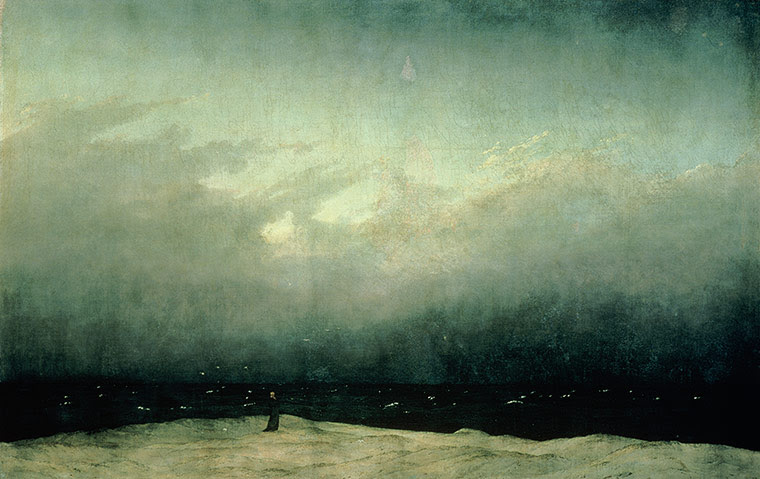 The Monk by the Sea
Caspar David Friedrich (1808-10)
Earth, water, sky: the elements are stacked in three bands, radically abstract. But the horizontals are countered by the tiny upright figure of the monk, who stands alone on the edge of the Earth. A black ocean extends immeasurably before him, opening like an abyss without comforting pictorial borders. The German romantic Caspar David Friedrich spent two years working on this alarming vision of a sea of darkness, with only the slightest hope in the hint of blue sky above the leaden clouds. The monk stands between the two sins against hope: presumption and despair. This is a sea of faith. Baie des Anges, Nice
Raoul Dufy (1927)
Painting the Baie des Anges is like painting Venice: everyone has done it before you. But the fauvist painter Raoul Dufy made the view his own to an exceptional degree with his joyfully sensuous views. The Mediterranean is not just blue in his paintings, it is a blue so deep and intense as to be counterintuitive – a hot blue, instead of its opposite. Dufy painted the bay over and over again, variously framed by striped parasols, fringed palms and little white buildings, but the sea remains the same brilliant blue. He is for ever associated with this stretch of the Mediterranean – his pictures have literally become postcard views. The Great Wave
Hokusai (c1831)
Hokusai’s stupendous work shows the great azure wave rising and flexing its claws over a dauntless little Fuji in the distance. The eternal mountain is frozen in that split second before the wave crashes down. Three boats struggling with the heaving tide are partially visible, in a pictorial game of hide and seek, and the scattering of foam doubles as snowfall over Fuji. Hokusai got the new colour of Prussian blue from the west, and in return presented a radical new idea – that foreground and background could be dramatically juxtaposed with out any need to fill in the dull middle distance. 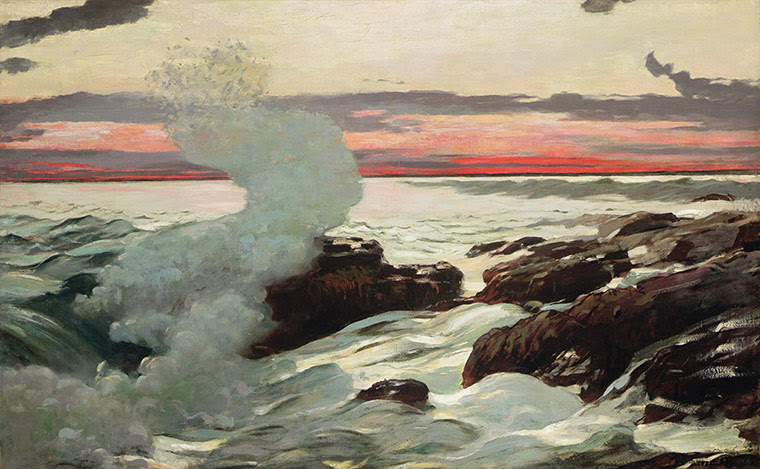 West Point, Prout’s Neck
Winslow Homer (1900)
The sea is stranger than any of us can imagine. That is the revelation of the many paintings Winslow Homer made off the coast of Maine, where he lived alone in a shore cottage for quarter of a century. The sea is wild, wind-torn and dangerous in his art. He often paints fishermen in peril, their boats disappearing between gargantuan dark waves. But it is also volatile and mysterious. In this painting, the ocean throws up a spectre of foam, an “S” curve so shapely it might be a female figure: the spirit of the Atlantic. 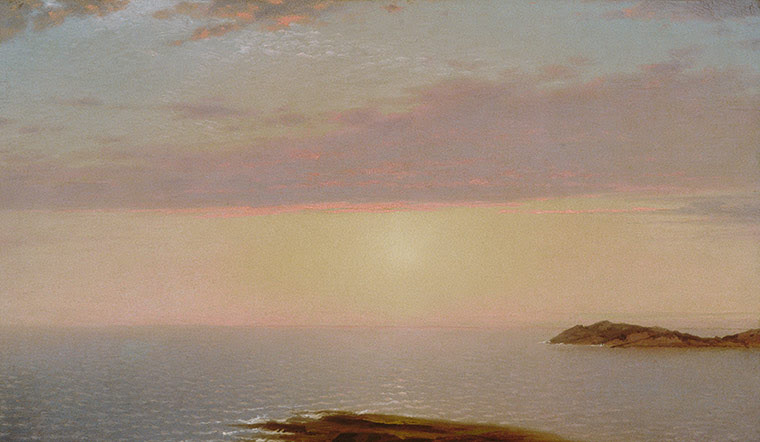 Sunset
John Kensett (c1872)
The sea is exquisitely tranquil in the art of the 19th-century luminist painter John Frederick Kensett. Stippled clouds brighten as storms pass, the water lies steady, mooring posts twinkle on the wide horizon. Here the sea is a mirror to the sun’s last rays, and the opal-coloured water ripples in the warmth of a summer’s evening. This was one of Kensett’s last paintings, made on Long Island where he lived and painted the Atlantic shores. It feels elegiac but absolutely peaceful. The sea stretches away into a world of pure light. 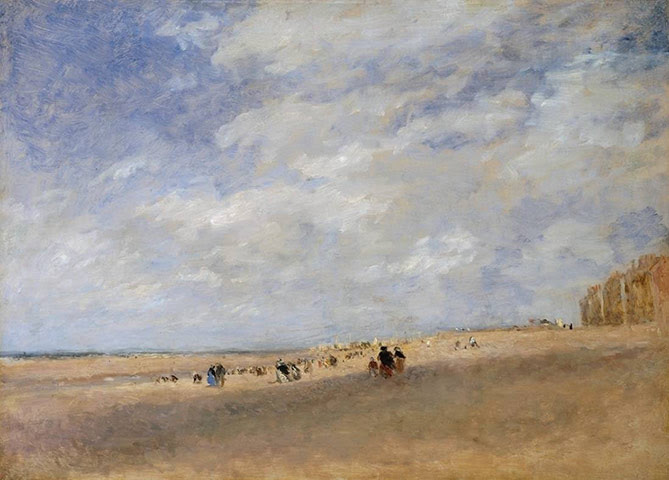 Rhyl Sands
David Cox (c 1854)
The sea recedes even as we travel towards it: that is so often the experience of a trip to the seaside. We arrive at the beach, longing to plunge straight into the waves, and are confronted instead by a great sweep of sand. David Cox’s wonderful painting shows the Welsh coast and surprisingly not the French, which it so resembles, just as his style prefigures French impressionism several years in advance. He painted the sea, in his 70s, just as it appears in life – remote, withdrawn, a distant bar of liquid colour far away across a strand. 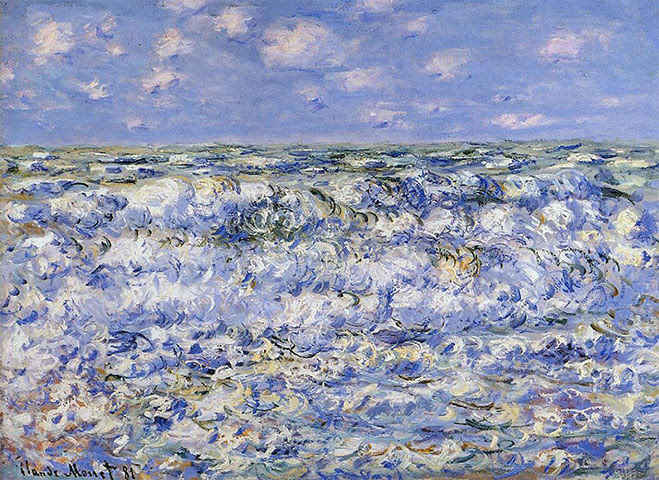 Waves Breaking
Claude Monet (1881)
Monet visited the Normandy coast many times, painting the English Channel from the same spot at different hours of the day, in all weathers, clambering over the rocks with his easel. Here he seems to be standing on the last strip of sand on the beach at Etretat as the tide races straight towards him. The image is so radically cropped that the picture contains nothing but waves foaming up to the sky – exactly what filled his field of vision at that moment. It is a painting of rushing waves and of the experience of visibility. 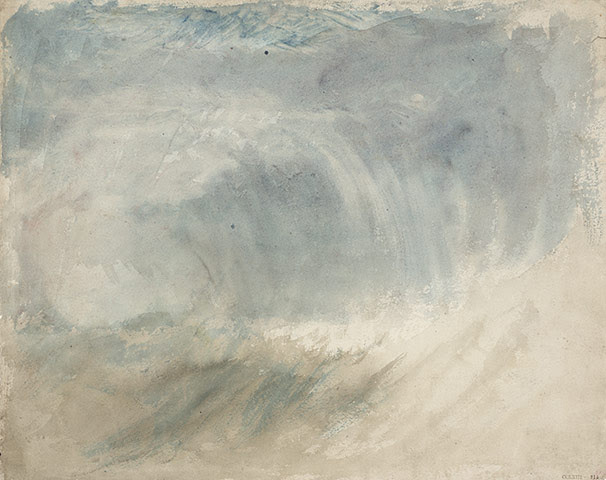 Storm at Sea
JMW Turner (c 1820-1830)
JMW Turner, the great sea dog, painted more than a thousand seascapes. He manages to depict the sea’s ever-changing effects in almost every single image. Here the waves meet the sky in a rolling vortex of air and water, the two elements melting into one in this superbly rapid study. “Pictures of nothing, and very like,” was Hazlitt’s barbed remark; which, turned on its head by modern critics, makes Turner a pioneer of abstract art. And what is the sea but a perfect abstraction of motion, colour and light? In Chelsea, where he lived, Turner’s nickname on the streets was Admiral Puggy Booth – after his supposed profession.