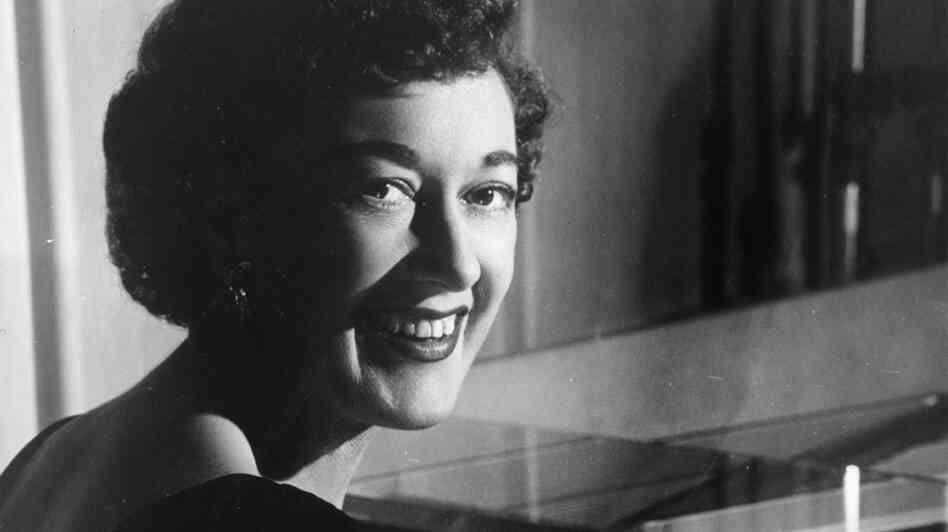 The pianist Marian McPartland, who has died aged 95, made the performance of hard music look ridiculously easy. British-born but resident in the US from the end of the second world war, she was performing vivaciously into her late 80s, and still fronting her radio show two years ago. She appeared to lose virtually none of the graceful precision, infectious bounce and eager improvising adventurousness she had shown in her youth: her appearances in Britain late in her 70s saw her breeze unconcernedly through a rich mixture of standards, originals, Billy Strayhorn classics, the odd John Coltrane modal meditation, and even a stately fugue.

Casual listeners might occasionally sideline this offhand virtuosity as just generic mainstream jazz, the kind of thing murmuring distantly through the hubbub of the world's bars most nights of the week. But a moment's closer attention would reveal there were flashing steel fingers inside McPartland's velvet-gloved approach and that her improvising would sometimes echo the bold phrasing and uncluttered modernism of Bill Evans, or even the hollow, ambiguous chords of an experimenter such as Paul Bley. She had a flawlessly accurate ear, could improvise across shifting keys without a blink, loved all kinds of music and was dedicated to inviting the widest possible audience to feel the same way.

McPartland was one of the most skilful and tasteful of players, from her arrival in the US in 1945 as the wife of American GI and trumpeter Jimmy McPartland, whom she had met while playing for the troops in Belgium the previous year. Her career involved solo work, occasional appearances as a classical recitalist, jazz educational work, perceptive writing on music, composing, and fronting the long-running National Public Radio series Piano Jazz, on which she showcased some of the best pianists. She frequently showed what a fine participator she could be with just a bassist and drummer for company, and always encouraged significant contributions from her partners.

Born Margaret Turner, and brought up in Windsor, she was a piano prodigy from the age of three, studying at the Guildhall School of Music and Drama, London, before working under the name Marian Page on the British music-hall circuit – to the considerable displeasure of her parents – with Billy Mayerl's Claviers, a four-piano show. But following her emigration and her marriage to Jimmy, she quickly began to build a career as a jazz soloist.

Soon after her arrival, McPartland sought out and befriended the most influential female instrumentalist in bebop – her fellow pianist Mary Lou Williams – and began regularly working from 1952 at the Hickory House, New York, where she led a fine trio including Joe Morello, the percussionist soon to become famous with Dave Brubeck.

In 1955 McPartland began to initiate projects to introduce jazz to schoolchildren and her enlightened work with black students in Washington DC was significantly ahead of the general thinking on educational issues and race in the US at the time. However, she was encountering storms in her marriage and went through a difficult period during the later 1950s and early 60s, which culminated in an unhappy tour with the bandleader Benny Goodman.

It was Goodman who first sought McPartland out, but he was a notoriously hard man to please and his relationships with musicians were often fractious. Goodman made it abundantly plain that he disliked his new pianist's modernisms and felt she was out of sympathy with his style. McPartland went into therapy at the Menninger Clinic in Kansas after a tour was abandoned following the assassination of President John F Kennedy in 1963 and Goodman expressed nothing but surprise at her need for sympathetic attention.

"I had to tell him he was the reason that was driving me there," McPartland said later, but the treatment turned her life around and led her to conclude with some irony that the curmudgeonly bandleader had done her a favour. She began a parallel life as a jazz broadcaster, discovering she could treat interviews the way she treated small-group improvisation – by knowing when to perform and when to listen.

Growing increasingly independent, McPartland also launched her own Halcyon Records label in 1969 (despite having recorded extensively for big jazz labels including Capitol, Savoy, Argo and Concord in earlier years) and began to tour, play at clubs and give workshops again.

She confirmed her class as a sensitive interpreter on an intimate recorded tribute to the composer Alec Wilder in 1973, and unique reworkings of standard songs, jazz classics by Strayhorn and Benny Carter, and contemporary pieces by Herbie Hancock and Chick Corea flowed from her fingers on memorable sessions in the 1970s and 80s. Though in 1970 she divorced Jimmy, she still threw a 70th birthday party for him seven years later – leading the cornettist to declare his belief "that all married people get divorced and start treating each other like human beings". The couple also performed together at the Newport Jazz festival in 1978.

In June that year, NPR began broadcasting Marian McPartland's Piano Jazz – with the host interviewing her guests from the keyboard, and eventually including practitioners of many instruments, though fellow pianists formed the majority. Artists and performers as different as Dizzy Gillespie, Steely Dan, Studs Terkel and the emerging young star Geri Allen were among the guests.

Through the 1980s, affected by the downturn in jazz's popularity, McPartland returned to classical music, performing Grieg's Piano Concerto across America. She also continued to work tirelessly for jazz education, and turned out to be an eloquent writer on the subject – her engaging pieces were collected in the anthology All in Good Time (1987). She also composed a number of enduring originals, including In the Days of Our Love, With You in Mind and Ambiance.

In the 1990s, the septuagenarian explored the music of John Coltrane, Ornette Coleman, and Lennon and McCartney in the company of the cutting-edge saxophonist Chris Potter; paid a recorded tribute to her old friend Williams; and played an 80th birthday gig at Birdland, New York, as a reunion of her old trio, with the bassist Bill Crow and Morello on drums. For her 85th at Birdland in 2003 (recorded for the Concord label), McPartland was accompanied by a raft of stars but still right at the heart of things, notably in a superb duet with the guitarist Jim Hall.

McPartland's ability to make the piano sound soft – even shy – within the most animated of pieces was always a hypnotic aspect of her performances. Her originals deftly bridged the language of Broadway songs with that of more contemporary music.

She once rhapsodically delivered such a solo at London's Pizza on the Park in the 1990s, and – as if anticipating criticism that never came – announced mock-defensively: "I made that record 40 years ago."

"That's when we bought it," declared a couple in the front row.

McPartland kept her friends for a long time. But, for her music and her inclusive spirit, she kept making new ones all through her remarkable life. 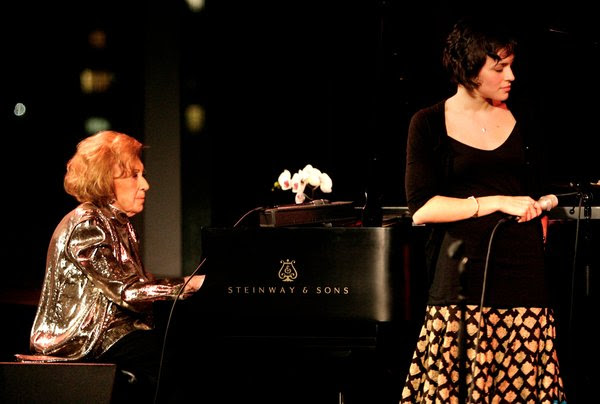 Marian McPartland, who died on Tuesday at 95, was an erudite jazz pianist whose career stretched back to the heyday of 52nd Street. But she will be best remembered for “Marian McPartland’s Piano Jazz,” the public radio show she hosted for more than 30 years, featuring duets and conversation with an array of musicians.

Some of those guests, like Eubie Blake, were her elders, others her accomplished peers. And some grew up listening to the show. That was the case for Norah Jones, who was an aspiring jazz pianist in Texas before she moved to New York and made her name as a singer-songwriter.

Ms. Jones, 34, first appeared on “Piano Jazz” shortly after releasing her debut album, “Come Away With Me” (Blue Note), which earned eight Grammy Awards. “It made me happy because I had listened to Marian for so long,” she said. “My mom and her ended up becoming friends, writing letters for the last 10 years.”

Speaking by phone from her apartment in Brooklyn, Ms. Jones reflected on both Ms. McPartland and the show. Here are some excerpts:

FIRST LISTEN My first exposure to Marian McPartland actually wasn’t through “Piano Jazz.” When I was 14 or 15, my mom took me to a free concert in Dallas with Marian and her trio. I was already into jazz and going to a performing arts school. But up until then I hadn’t seen a lot of women perform jazz, certainly no women instrumentalists. And to see this lady who was my grandmother’s age up there, playing with a piano trio, was just the coolest thing I’d ever seen.

I went to school that week, and I had a teacher, Kent Ellingson, who had every “Piano Jazz” show on cassette. So I dubbed all the tapes, and listened to almost all of them.

PLAYING WITH HER I was actually on her show twice. I like how she would play one song herself, one of the artist’s songs. She did that with me; she played “Don’t Know Why” and completely reharmonized it. And she’ll let you play something, and then you get to play together.

I was really nervous, but I wasn’t nervous about her not being cool. She was just the most sweet, welcoming, motherly sweetheart: polite, very British, but very warm. I remember her smile after we would finish a tune. You can kind of hear it on the radio. She says something like “Uh! That was marvelous,” and you could see it on her face. It was nice, after hearing those Marianisms on the radio, to be the recipient of one.

My second “Piano Jazz” was at the Tanglewood Jazz Festival in 2003. That show was probably one of the bigger shows we had done at the time. Yesterday I listened to that recording, and I sing so differently now. I still thought of myself as a jazz musician then. I really played that music; I lived it and breathed it, even though my first album was not straight-ahead jazz.

WHAT SHE WAS LIKE A friend was recently telling me about some show that Marian did where the guest wasn’t very respectful, and she took care of business. So maybe we should add that she was a tough broad, too.

Playing jazz as a woman, back in the day, I’m sure it was hard for her. And that fact that she found this thing that she’s so good at, and became really successful at age 60, that’s awesome. I think music can keep you young, if you never stop using your mind in that way. That’s what was so cool about her. She seemed genuinely excited about every guest, even to the end.

http://www.nytimes.com/2013/08/24/arts/music/norah-jones-remembers-the-radio-host-marian-mcpartland.html?_r=0
Posted by Frank Black at 10:15