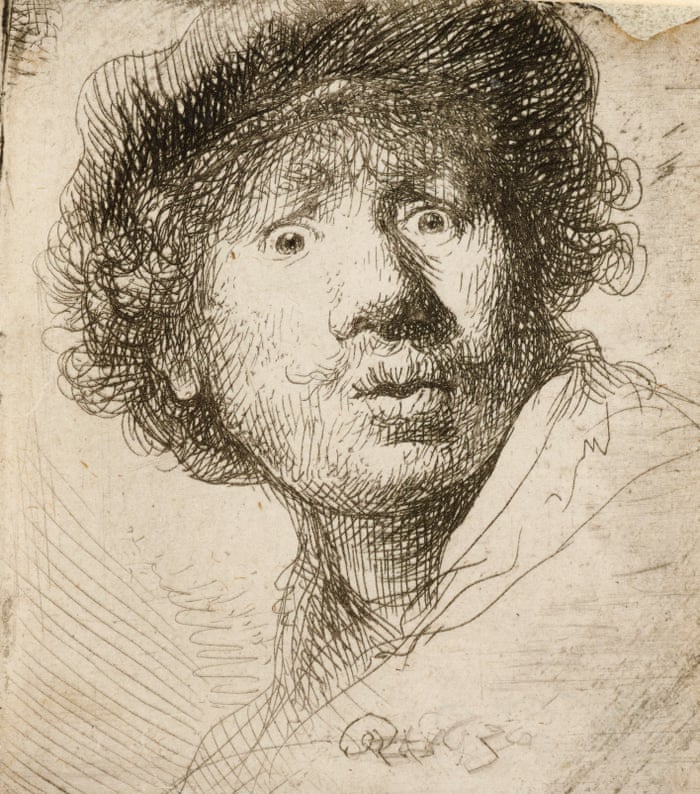 Self-portrait in a cap, wide-eyed and open-mouthed, 1630

Young Rembrandt review – how a master learned from his mistakes
Ashmolean Museum, Oxford
This absorbing show of Rembrandt’s early work reveals how sweat and dedication turned an error-prone teenager into an artist of unrivalled greatness

Rembrandt is shocked to see you. He reels backwards, mouth open, eyebrows raised in amazement at your startling arrival. You can see the whites of his eyes.

This is the one-two action – you appear, he reacts – of this tremendous etching, made in 1630 when Rembrandt was around 24. It is a portrait of the artist as a young star. All of its quicksilver whorls and curlicues are put to the service of theatre: the image as incident, as mutual encounter. It takes the convention of eye-to-eye contact and transforms it into vital drama.

But 24 is not precocious, in terms of art history. Raphael and Dürer were virtuosos before the age of 10. Picasso, in his own words, could draw like Raphael as a child. Rembrandt is not regarded as a prodigy. Indeed, it is the very novel aim of this exhibition – the largest ever devoted to the first decade of his career, 1624-34 – to show just how hard Rembrandt had to work to become Rembrandt.


Young Rembrandt is filled with unexpected curiosities and rarely seen masterworks. It follows the artist from his teenage beginnings in Leiden to the glory days of Amsterdam, with riches and a thriving workshop. You see him faltering, practising, correcting and even junking work en route. There are duff portraits, where the sitters all look the same, and unfulfilled drawings. The curators do not stint on his failures.

It is unusual enough to see some of Rembrandt’s early Bible paintings, over-coloured and hyperbolic in their melodrama. But it is odder still to have a museum draw deliberate attention to his faults. In an etching circa 1625, The Circumcision, baby Jesus is a stiff toy, the bystanders are badly drawn dolls, and there is no sense of depth or perspective. Look closer and you can see that the artist felt the same. He made several attempts to erase botched lines. 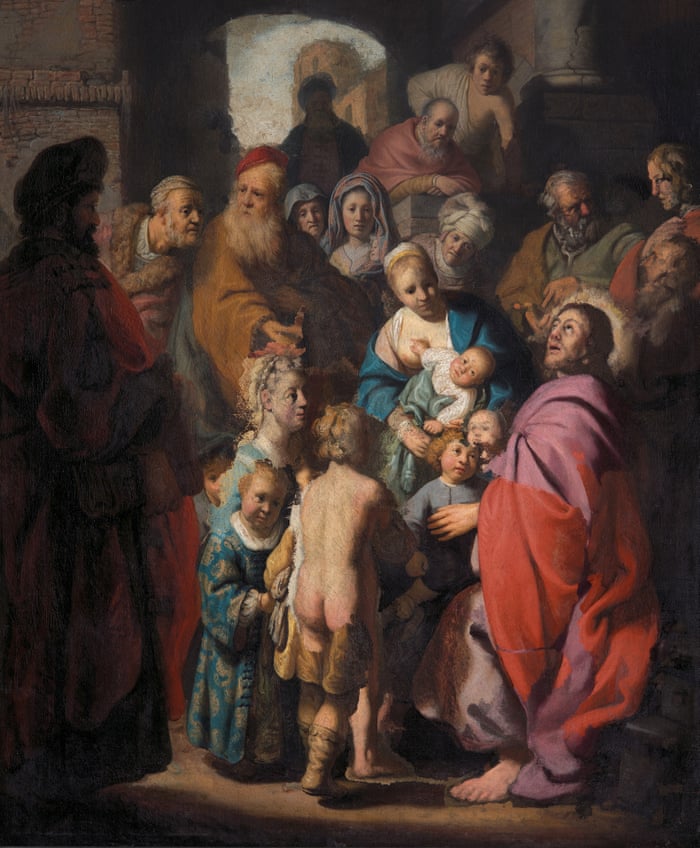 Early Rembrandt can be blockish, crude and clumsy. Figures may be out of proportion, the composition skewed. He is so variable that attributions remain contentious. A painting called Let the Little Children Come to Me was sold at auction as Dutch School as recently as 2014. It is shown here for the first time as a Rembrandt, and while the artist seems to be here in person, as a compelling self-portrait at the top of an ungainly pyramid of parents and children, the painting is such a pile-up of idioms it is hard to believe that it is not by several different artists. 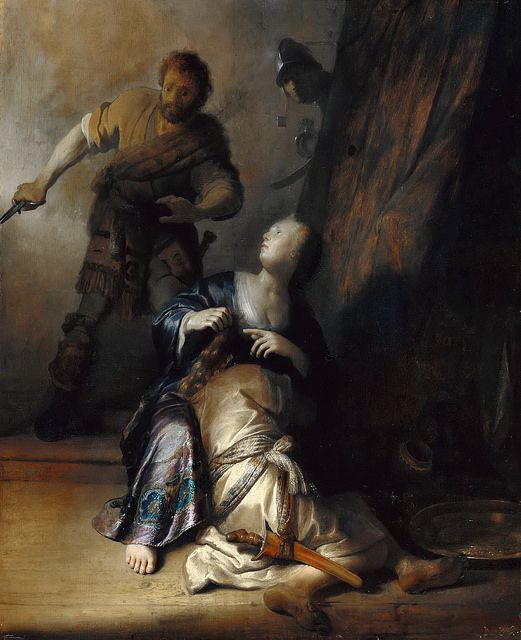 The shocked self-portrait is reprised in a painting of Delilah shearing off Samson’s hair. Rembrandt’s face is everywhere. Something of him appears not once but twice in the background of a 1626 work called The Baptism of the Eunuch, seriously drawing attention away from the holy moment itself. And there is a dark-eyed and tousle-haired self-portrait – as recognisable as it is flagrantly unexplained – in the mysterious image known only as History Painting. This is the young Rembrandt as you first see him at the Ashmolean. 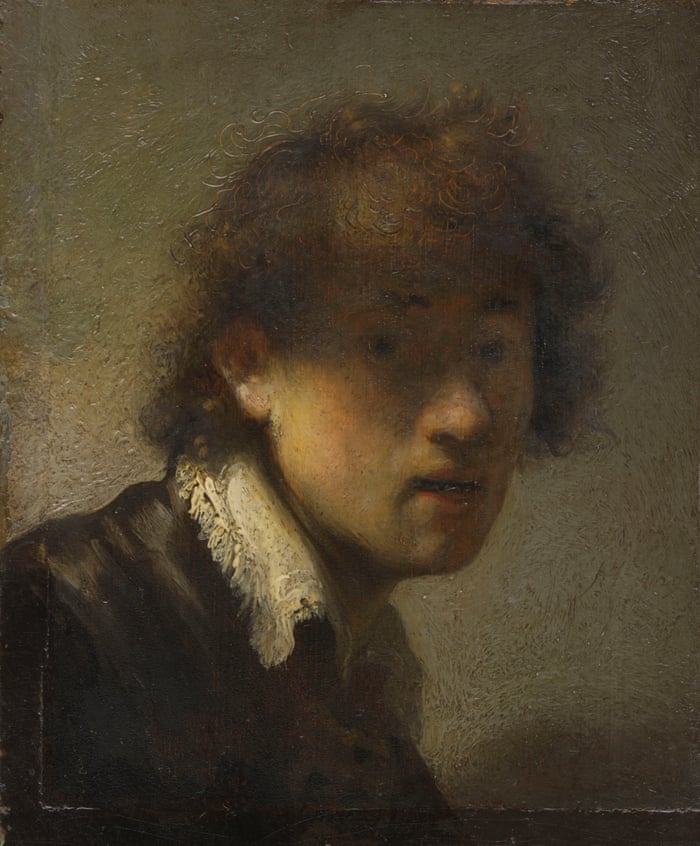 Three self-portraits greet you at the door: each surprisingly small (fame seems to enlarge them in mind) and equally astonishing. From Munich comes the haunting young artist as a lone soul in the forests of the night, eyes blacker than the shadow falling over them. He is perfectly positioned at the boundary between darkness and light as to seem almost unreachable – until you notice the eyes look straight back at you.

An ink drawing, watchful and open-mouthed, and an etching of the artist with a tangled lovelock and wild eyes come from the same phase, circa 1629. Painting, drawing, print: Rembrandt is working in all three media at once – and in hybrid. He used a split-tipped drawing quill to work the copper plate (nobody had done it before, and he never did it again). His experiments are so extensive and radical.

What is wonderful about this presentation is the way it takes your eye directly into his shifting thoughts. Rembrandt uses an etching plate like a sketchbook, working all over it, turning it round and round to get a good clear patch for a new and better vignette. If he doesn’t like a drawing, he cuts it up and recycles the pieces. One captivating sequence of prints shows the artist changing his mind on the plate as he goes. A portrait of his father starts as a head and shoulders, expands to include the body and finally closes right in on the head, deleting all the rest: the mind is what matters.

A red chalk sketch of this elderly parent, deeply asleep, seems to have received a brown wash when his father died in 1630. It acquires a memorial solemnity. And the several portraits of Rembrandt’s ageing mother, so lined and creased, with her distinctive nose, are equally affecting. 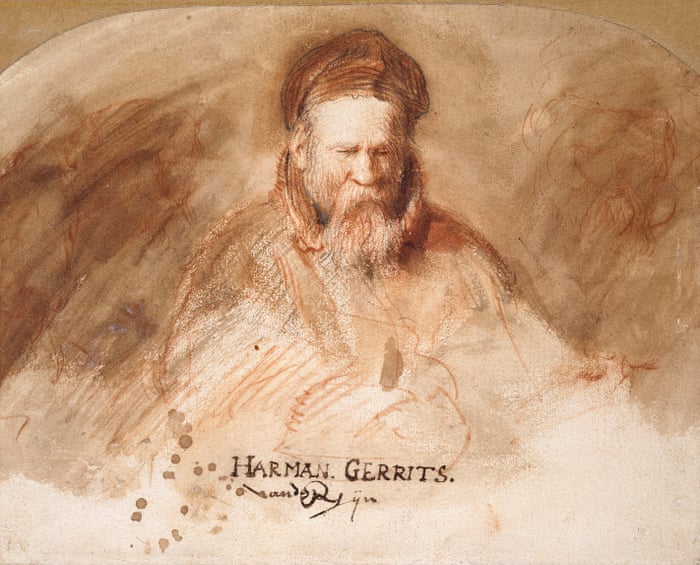 She is doing exactly what her son asks of her – sitting very still, quietly waiting while he depicts her in all her humility. Her character is revealed in these passing moments as much as her appearance: the patience she gives to her son.

Rembrandt worked incredibly hard to become an artist of Shakespearean dimensions. The 140 works here are barely a fraction from a decade of continuous revolution, in which he is constantly finding new ways to convey the profundity of our human drama. By the third gallery of this exhibition, he is painting himself as a potentate of theatrical grandeur, with fancy dress costume and props to match. The paint – lavish, darting, radiant – rises at every level to the performance. 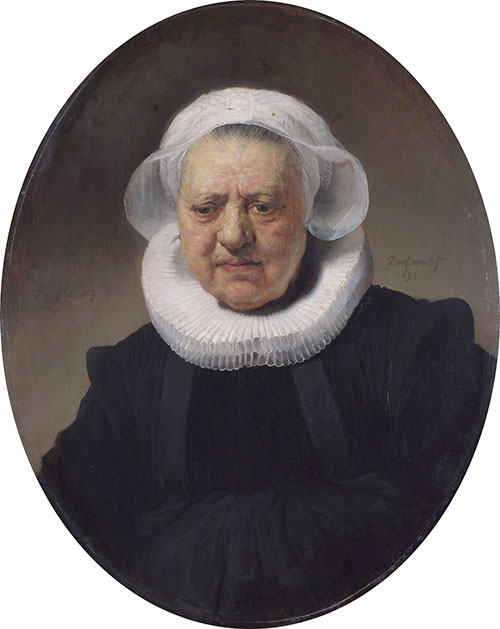 
There are too many works by his friend Jan Lievens in this show. And you arrive at Rembrandt’s “mature” style via a room full of his students’ homages, before seeing what it was that actually inspired them. (The National Gallery, coincidentally, has a show by one of those pupils, Nicolaes Maes, inventor of an eavesdropping scenario in which one character in a painting urges you to listen to another in the next door room: piquant rather than profound.)

By 1634, Rembrandt had painted The Anatomy Lesson of Dr Nicolaes Tulp and other renowned masterworks that are not in this show. The object is to follow the steps, and missteps, of his journey along the way. You will have the strongest sense of the streets around him – of hawkers and beggars, comical dogs and overfed burghers copiously peeing – as much as the imaginative empathy of his visions; Jeremiah lamenting the destruction of Jerusalem as in some floating nightmare of grief; a later print of The Circumcision, now condensed to the scale of a sonnet, in which the Christ child screams. 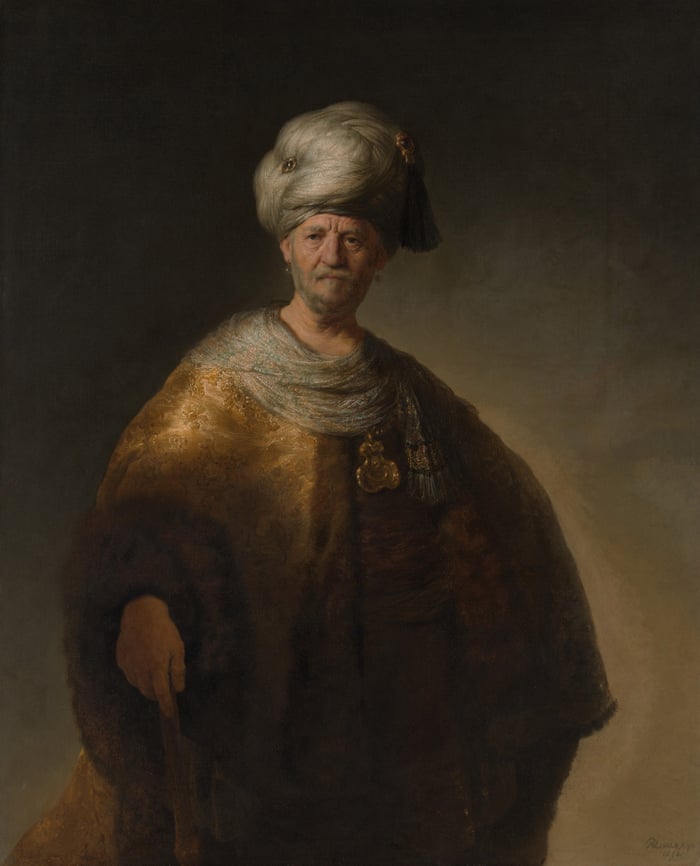 What this show reveals, too, is an exceptional sympathy with old people in one so young. A nearly life-size portrait of a woman aged 83 shows the marks of woe as much as experience. And perhaps most magnificent of all is the painting long known as The Noble Slav, on loan from New York’s Metropolitan Museum. It shows an elderly man in a feathered turban and oriental costume. The brushwork is dazzling, mimicking the glitter of his gold chain, the translucent sheen of pearls and the shimmer of silk with a thousand different strokes. But rising out of all this is Rembrandt’s monument to the man himself: proud and resolute, even as the light fails.

• Young Rembrandt was at the Ashmolean Museum, Oxford, until 7 June

https://www.theguardian.com/artanddesign/2020/mar/01/young-rembrandt-review-ashmolean-museum-oxford
Posted by Frank Black at 10:43