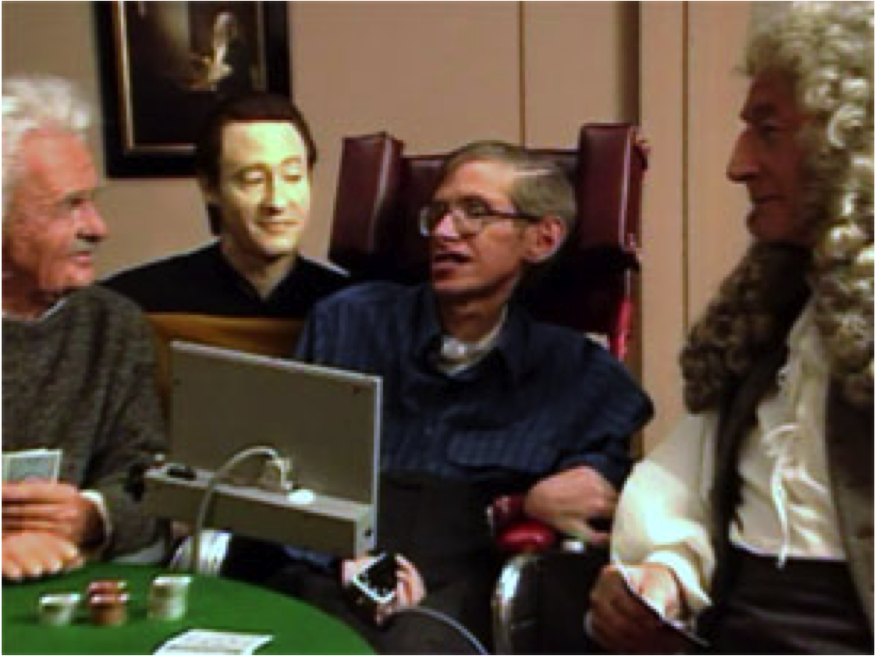 
Stephen Hawking - who died aged 76 - battled motor neurone disease to become one of the most respected and best-known scientists of his age.

A man of great humour, he became a popular ambassador for science and was always careful to ensure that the general public had ready access to his work.

His book A Brief History of Time became an unlikely best-seller although it is unclear how many people actually managed to get to the end of it.

He appeared in a number of popular TV shows and lent his synthesised voice to various recordings.
Stephen William Hawking was born in Oxford on 8 January 1942. His father, a research biologist, had moved with his mother from London to escape German bombing.

Hawking grew up in London and St Albans and, after gaining a first-class degree in physics from Oxford, went on to Cambridge for postgraduate research in cosmology.

He was diagnosed with motor neurone disease while at university

As a teenager he had enjoyed horse-riding and rowing but while at Cambridge he was diagnosed with a form of motor neurone disease which was to leave him almost completely paralysed.

As he was preparing to marry his first wife, Jane, in 1964 his doctors gave him no more than two or three years of life.

But the disease progressed more slowly than expected. The couple had three children, and in 1988 - although Hawking was by now only able to speak with a voice synthesiser following a tracheotomy - he had completed A Brief History of Time - a layman's guide to cosmology.

It sold more than 10 million copies, although its author was aware that it was dubbed "the most popular book never read".

Hawking discovered the phenomenon which became known as Hawking radiation, where black holes leak energy and fade to nothing. He was renowned for his extraordinary capacity to visualise scientific solutions without calculation or experiment.

But it was perhaps his "theory of everything", suggesting that the universe evolves according to well-defined laws, that attracted most attention.

"This complete set of laws can give us the answers to questions like how did the universe begin," he said. "Where is it going and will it have an end? If so, how will it end? If we find the answers to these questions, we really shall know the mind of God."

Hawking's celebrity status was acknowledged even by The Simpsons - he was depicted drinking at a bar with Homer, suggesting he might steal Homer's idea that the universe is shaped like a doughnut.

He also appeared as himself in an episode of the BBC comedy series, Red Dwarf and as a hologram of his image in Star Trek: The Next Generation.

The rock group Pink Floyd used his distinctive synthesised voice for the introduction to Keep Talking, on their 1994 album The Division Bell.

Undeterred by his condition, he continued his work as Lucasian Professor of Mathematics at Cambridge University, and in 2001, his second book - Universe in a Nutshell - was published.

He believed his illness brought some benefits; he said before he developed the disease he had been bored with life.

But his condition inevitably made him dependent on others. He often paid tribute to his wife, who had looked after him for more than 20 years, and friends and relatives were shocked when he left her for one of his nurses, whom he married in 1995.

By 2000, Hawking was a frequent visitor to the emergency department of Addenbrooke's Hospital in Cambridge, seeking treatment for a variety of injuries. Police questioned several people about allegations that he had been subjected to verbal and physical abuse over a period of years.

He was known to be an erratic, almost reckless driver of his electric wheelchair, and Hawking insisted his injuries were not caused by abuse. No action was taken.

In 2007, he became the first quadriplegic to experience weightlessness on board the so-called "vomit comet", a modified plane specially designed to simulate zero gravity. He said he did it to encourage interest in space travel.

"I believe that life on Earth is at an ever-increasing risk of being wiped out by a disaster such as sudden nuclear war, a genetically engineered virus, or other dangers. I think the human race has no future if it doesn't go into space. I therefore want to encourage public interest in space."

In 2014, the film The Theory of Everything was released, based on Jane Hawking's account of their courtship and marriage. Hawking himself met Eddie Redmayne as part of the actor's preparation for taking on the role of the scientist.

In a series for the Discovery Channel, he said it was perfectly rational to assume there was intelligent life elsewhere but warned that aliens might just raid earth of its resources and then move on.

He once wrote that he had motor neurone disease for practically all his adult life but said that it had not stopped him having an attractive family and being successful in his work.