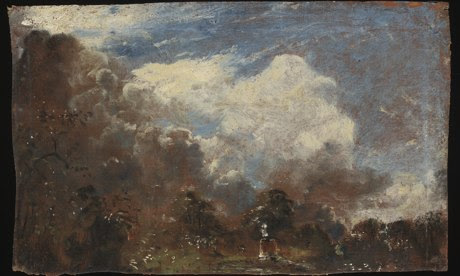 A vibrant and unknown John Constable oil sketch has been found hidden behind another of the artist's works, the V&A has revealed.

Conservators made the discovery when they were preparing works for a major Constable show planned for autumn 2014. Behind his oil sketch of Branch Hill Pond in Hampstead was another sketch which had, for goodness knows what reason, been glued on.

"It was very exciting," said conservator Nicola Costaras on Tuesday. "We obviously knew that no one had seen it since … well, certainly since it came in to the collection. It was very lucky that the paint wasn't more damaged given it had been ironed on to a layer of glue."

The museum has the world's largest Constable collection thanks to a bequest by the artist's last surviving child, Isabel, in 1888. She gave the remains of her father's studio which included three easel paintings, 92 oil sketches and 297 drawings and watercolours.

The V&A knew there was something about Branch Hill Pond because they had seen a ghost outline when it was x-rayed. But conservators assumed it was Constable – an always thrifty artist – painting over something else.

When it was noticed that the backing canvas was coming loose they investigated further and found another sketch. 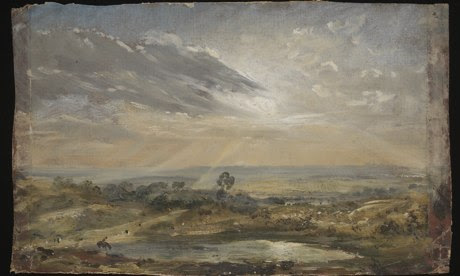 The V&A's curator of paintings, Mark Evans, said the oil sketches are held in far higher regard today than they would have been in the 19th century. "When Constable died his oil sketches were knocked down to a couple of guineas for four or five."

Evans believes the sketch is of a brick kiln – it is certainly a free standing object with smoke coming out of it in a clearing – and almost certainly would have been in Hampstead, where Constable had a house.

All the evidence suggests that the canvas was made in the late summer of 1821 or 1822 and was pinned to a solid support as it was being painted, probably the artists's paint box which he used for sketching in oils outdoors.

Quite why, decades later, it was glued to the back of another sketch is a mystery although it may simply have been that someone framing Branch Hill Pond needed something to stick it on.

"Whoever did it wasn't expecting that it would be seen again," said Evans.

The public can see the newly discovered Constable, given the name Landscape with a kiln, in the V&A's paintings galleries from Wednesday.

http://www.theguardian.com/artanddesign/2013/nov/26/constable-found-behind-branch-hill-pond-sketch
Posted by Frank Black at 06:59